A machine to do your decarbing dirty work

hat if I could tell you about a newly available machine that makes your weed and trim stronger? And it's not complicated; if you can press a button, you can make it work. If you can't press a button, well, increasing the potency of your cannabis is the least of your concerns, my friend.

How does it work? Science. I'm sorry if you were expecting "the power of Jesus," but as with many, many questions that people presume that is the answer for, the real answer is science.

The machine of which I speak is the Nova Decarboxylation machine by Ardent. It's absurdly easy to use. First, I have to get all Poindexter and break down the science of how it works. It's important that we do that because the U.S. is still 24th in student literacy and other benchmarks of science. You want to be part of the Resistance? Learn how your weed works—scientifically! (Pushes glasses up bridge of nose.)

Tetrahydrocannabinolic acid, or THCA-A, is a non-psychoactive acidic cannabinoid found in the buds of a cannabis plant in its raw form. Ever eat a bud and wonder why you don't get high? That's because you need to apply heat to it in some manner, the most common being smoking. Doing so releases and removes carbon dioxide (CO2) from the bud, which converts the THC to the sought after Delta 9 THC, which is the THC that gets you high.

The application of that heat is known as decarboxylation, and while it happens when you smoke, it also benefits edibles, tinctures and other products by pulling that CO2 from the plant matter.

Why not to use the old school method...."And if you get distracted from the timer, say, because you had to go down a clickhole of cat videos, you get weed that has lost some of the existing THC that you burned off. Nice one." tweet this

I make edibles often, and I've "decarbed" my cooking materials by spreading them out on a baking sheet and leaving them in an oven at between 225 and 240 degrees for anywhere from 45 minutes to 90 minutes. The variance in temp and time depend on the buds' moisture content—determined by me touching and squeezing the plant matter.

Aside from that being a very inexact science, the method fills the entire house with the smell of a half-pound or more of weed slow roasting in an oven. Even with the right settings and timing, it reeks. And if you get distracted from the timer, say, because you had to go down a clickhole of cat videos, you get weed that has lost some of the existing THC that you burned off. Nice one.

Enter the Nova. It's the size and shape of a basic coffee grinder, at 7.5 inches by 4 inches, and mine was a pleasant Barney the Dinosaur shade of purple. Unscrew the black top and remove the silicon lid that snugly fits onto a metal canister. Place between a quarter to full ounce of flower or trim inside, based on the density of the buds used. You can also decarb concentrate, so long as it's placed into a silicone container first. 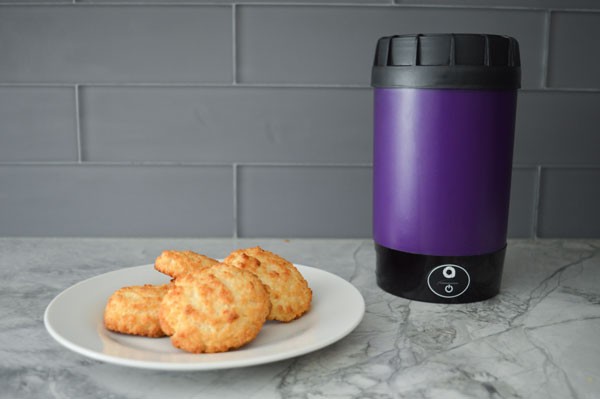 eplace the lid, screw on the top and press the lone button on the front, which turns from green to red. Now go away and come back in 90 to 120 minutes.

The Nova bills itself as a "precise decarboxylation machine." That claim is backed up by dual sensors and a high tech thermal blanket. The sensors monitor the temperature in real time, and an algorithm prompts heating cycles that fully permeate the material. The time needed to decarb varies based on the moisture content. There was a light smell once opened, but barely noticeable after 10 seconds. The interior of the black top had gathered light condensation, proof that the buds had not been at optimal moisture levels for maximum THC content.

I made coconut oil from decarbed and non decarbed B-bud flower and trim, and all my patients reported a preference for the edibles made from the decarbed version.

The website has some very interesting results from flower they tested prior and post decarb, and it's a great, easy read to gain some insight to a process still unbeknownst to many, and to learn a bit more about some of the less frequently discussed cannabinoids, such as CBGa.