Not all heroes wear capes—in fact, in the real world, they often don't. Often incognito without their uniform, veterans can struggle with post-traumatic stress disorder, isolation and other challenges after returning home from service in the military. That's where heroes with four paws come in. 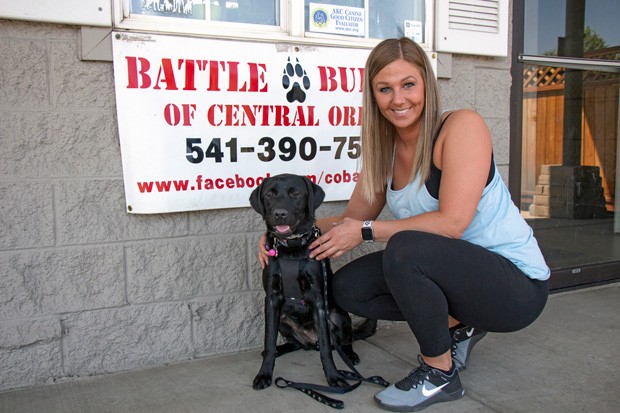 Battle Buddies of Central Oregon is a local nonprofit dedicated to preventing veteran suicides through canine companionship and training as emotional support animals. The nonprofit also connects those who have served with valuable resources available to veterans, in addition to funding training for 10 to 12 dogs every year.

"Luckily, federal law allows people to train their own service dogs—it's not required that they be certified or licensed through some specific agency," says Shannon Lucas, Battle Buddies of Central Oregon program director. "So, we point them in the right direction, and we help with task training."

Dogs start by learning basic obedience and can later learn specific tasks to become tried-and-true service dogs. Task training is what sets service animals apart from emotional support animals. Dogs can train to perform a variety of tasks specific to the needs of their owner—from guiding the blind, alerting those nearby about seizures, calming people during anxiety attacks or nightmares and more.

"There's a task called deep pressure stimulation, where the dog lays on the person and applies pressure to stimulate the person's nervous system—calming them," says Lucas.

Elizabeth Harms, 32, served in the U.S. Army in Iraq in 2006, and experiences anxiety as a result. She's in the process of training her dog Tinkerbell to help mitigate some triggers.

"I'm a disabled veteran and I had a really hard time adjusting to civilian life," says Harms. "And I found quickly that dogs make a world of a difference."

She adopted Tinkerbell, a small black lab, as a young pup. She's now nine months old. While she has two other dogs at home that she considers emotional support animals, she's training Tinkerbell to be a service dog. Harms will eventually teach her how to "block," a trained task that will help keep strangers a comfortable distance away from her personal space when out in public.

Harms will meet with trainer Bryan Castleberry at Cascadia Canine Training School once a week. Training can take up to two years—but she says it's well worth the time and effort.

"They've just been with me every step of the way," says Harms, referring to Battle Buddies. "Rode was initially supposed to be the service dog and when he didn't work out because he was actually a little skittish, they were really supportive about switching to a different dog. They've gone up and down with me."

Veterans interested in participating in free emotional support animal training through Battle Buddies of Central Oregon are invited to apply on their website, battlebuddiesco.org.