After years of effort, local surfboard shaper Conway Bixby has made it 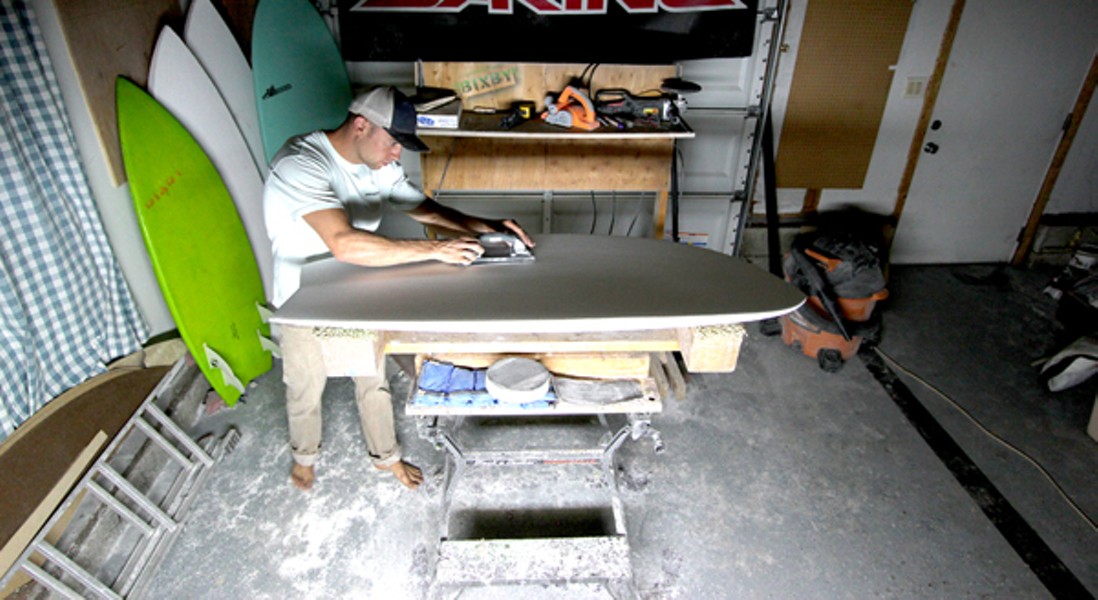 It sounds like a dream job and it is, says Bixby, a 31-year-old Oregon native. Shaping, as the practice is called, recently became a full-time job for the Bend resident who spent this summer often cranking out one board a week to fill custom orders. Working at home on his own schedule and building objects that are intricately connected to his passion—surfing—is his dream, realized. It took years to hone his skills and get to this point, but Bixby knew he was going to make it when a couple of years back he got the ultimate endorsement.

The glorious I've-made-it moment happened when Bixby was surfing one of his early creations ("a pretty janky-looking board, but it actually worked," Bixby explains) at a standing wave created by one of the area's many canals. It was there that he ran into Hawaiian big-wave surf legend Gerry Lopez.

"Gerry got out there on it and was stoked," recalls Bixby. "He gave me some pointers—it was pretty crazy."

Surfers, in all of their many manifestations, form a tight brother(sister)hood. And so it is with shapers, to an extent. But there also exists an almost fatherly figure-it-out-yourself-first-then-we'll-talk type ethic. And so it has been with Bixby and Lopez's relationship.

"He hasn't given me all the secrets—he's definitely making me work for it," Bixby says.

Bixby, it seems, is not averse to such work. He's been shaping for nearly 10 years and is, aside from a few pointers from Lopez and others, entirely self-taught. Before he was shaping full-time Bixby, a strong multi-sport athlete—surfer, kayaker, climber, mountain biker, snowboarder—was, like many young Central Oregonians, doing seasonal work to support his lifestyle. In the winters he ran snowcats at the mountain, and during the summer months, worked in Sunriver as an arborist.

Now, he's hoping that through word-of-mouth his thoughtfully designed Bixby Surfboards will sell themselves. (Though he has no website yet, he should soon have a Facebook page. In the mean time, potential clients can contact Bixby at bixbysurfboards@gmail.com.)

It seems a likely prospect. Bixby started making boards for friends. Then friends of friends. That circle is increasingly almost weekly, partly because Bixby is no one-trick pony. He's been making everything from wakesurf boards (good for Central Oregon's many lakes), to the ever-popular stand up paddleboards, to hybrid surfboards (his favorite current design). He charges $350 to $450 per board—a steal considering custom boards often go for well over a grand.

Hybrid boards, versatile and approachable, have become an increasingly popular choice for everyone from ambitious beginners to savvy experts. Hybrids are short—as small as 5 feet, 4 inches tall—and easy to turn, but unlike a high-performance shortboard they're also wide, thick and surprisingly stable. They're easy to paddle and excel in Oregon's small, mushy summer waves as well as winter's three-feet-overhead sphincter clinchers.

"You get a lot of drive out of the board," Bixby explains of the quad fin hybrids. "They drive well, but have a loose feel. You can snap it around a little bit—it's like skating on a wave."

Kea Eubank, a local surfer with more than 20 years of experience, agrees. He's already bought two hyrbid Bixby boards and is waiting on a third. He says he just likes their feel and the custom touches, like the added thickness.

Bixby's shaping process is pretty standard. He uses either standard polyurethane or the lighter polystyrene (the stuff your foam beer cooler is made from). He buys blanks in bundles from a wholesaler and, using hand tools and a respirator, whittles the foam block into the desired shape. Then comes the fiberglassing stage (for strength), then the resin stage (more strength) and finally, a curing process. He then flips the board and repeats. Add a couple more coats, sand and viola! A surfboard.

It's a messy, time-intensive process—and not as easy as it sounds. And Bixby, who's also been acquiring foam from a roofing contractor to minimize how many blanks he buys, has worked everywhere from garages of friends to area airplane hangers. Now he's in his own garage and is moving his workstation less and less.

It may seem strange for an aspiring shaper to make a home in land-locked Bend, but so far Bixby says Bend's proximity to the ocean has been inconsequential. Between standing waves in Central Oregon canals, to the SUP boom, to wakesurf boards, there are plenty of ways to slide on waves here in the high desert. And with a surf park planned for the Colorado bridge area, the prospects are only growing for Central Oregon surfers and shapers.

Bixby isn't the only area shaper. Lopez shapes in Bend (gerrylopezsurfboards.com) and so does Rhett Larsen (meliakaisurf.com), an area firefighter. Kiley Remund's company World on Water (facebook.com/WOWBoards) sells custom surf and stand up paddleboards, and Bend-based Stand on Liquid (standonliquid.com) creates its own SUP designs but has them constructed in China to hit a competitive price point. Aspiring shapers should look into Greg Bridges' stand up paddleboard construction class available through Central Oregon Community College (Oct. 1-Nov. 19, $119, register at cocc.edu).

For the water-averse, take advantage of the cooler temps and get out for a hike or trail run. But pick something new. Try the Soda Creek extension trail off of the more popular trail to Green Lakes (also good). Avoid the crowds on South Sister and hike just as far as the brilliant blue Moraine Lake (also accessible from the Green Lakes trailhead). Or, go up to Cultus Lake and do an out-and-back on the gentle, 4.1-mile Winopee Lake Trail.