For transplants and visitors, a quick guide to thriving when winter throws out her worst

Many Central Oregon transplants come from warmer climates; sunny southern California, the dry heat of Arizona, or in my case, Memphis, Tennessee. Until last year I had never witnessed a white Christmas, much less the Snowmaggedon that hit in late February, or the lighter storm we got last week.

The cold, long winters and short days take some getting used to, often taking newcomers by surprise. While the snow can be entertaining, it can also be a wake-up call and a huge hassle.

Whether you're already here or you're considering a move to Central Oregon's winter wonderland soon, these steps are going to make surviving winter a lot easier.

Keeping a vehicle safe from the cold can be a challenge, especially without a garage. Waking up earlier to scrape ice from the windshield in the morning is a pain, but it's a necessity. Our first thought was to purchase tire chains, but as most longtime locals know, an AWD or 4WD with good traction tires does suffice. Keep the basics in the car: water, snacks, ice scraper, essential tools, battery cables, extra clothing, a blanket, a flashlight, flares and even a snow shovel for when the snow hits. You never know when you may get stuck or might need to help someone else. This holds truer on a road trip.

One of a new Bendite's first winter purchases: a snow shovel. Last March, I rarely went to the gym because I got a daily workout with my prized shovel. I quickly learned to shovel the snow before it gets packed down.

With a long driveway, shoveling may take too much time and effort. Last year, I had to pay someone to clear mine, but this year my new toy is a snowblower—not cheap, but money well spent. Better yet, get the neighbors to chip in and buy one together.

When the snow piles up on top of the house, a roof rake comes in handy. No one wants a collapsed roof.

To avoid freezing pipes, disconnect outside garden hoses. Keep the cabinets open under indoor faucets and even allow them to slightly drip when freezing temps persist.

Better to be overprepared and have too many layers rather than not have enough. A solid winter clothing kit should include a pair of sturdy snow boots, plenty of pants, some sweatshirts or flannels, a hat, gloves and maybe some thermal underwear. Then bundle up.

Many come to Central Oregon to enjoy the outdoors—but before we moved here, I couldn't tell you the difference between downhill and Nordic skiing.

With these types of activities comes expensive gear. I soon learned to shop for used items at stores such as Gear Fix, or yard sales and Craigslist. Shops like REI rent snowshoes. 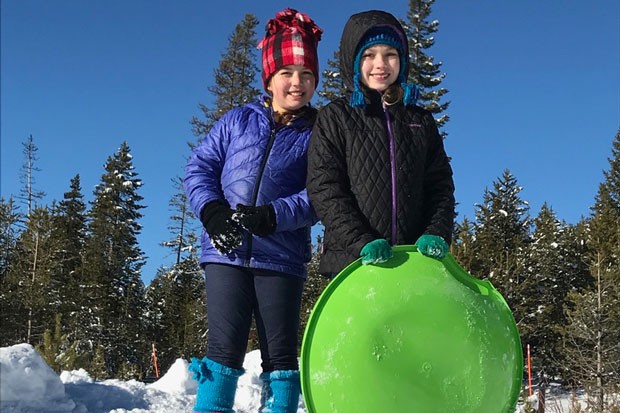 For those who aren't into skiing (like my daughters at this point) but still want to spend time outdoors, there's always sledding. Hills as close as Drake Park scream, "Slide down me!" Wanoga Sno Park, a short drive down Century Drive, has steep inclines reminiscent of the one Chevy Chase slid down in "Christmas Vacation." If nothing else, you can build an amazing snowman.

A wise neighbor who's lived through several Central Oregon winters suggested two things needed for winter comfort: a wood stove and a jacuzzi. With no other source of power, we rely completely on electricity. Our first Pacific Power bill stunned us, and soon, we will be purchasing a wood stove. Right now, the hot tub at Juniper Swim & Fitness or the hot pools at McMenamins suffice for a warm, relaxing retreat.

Central Oregonians are a hardy breed. The snow rarely, if ever, stops them from enjoying the outdoors or a local brewery, skiing across town or sending the kids to school. Last year was my initiation, and after surviving it, I feel I can adapt to anything!