Survivors of Hiroshima in Bend and Redmond

If you don't get the good kind of chills from the story of these trees, better check your pulse.

In April and May 2020, with the quiet anti-climactic-ness that met everything we pressed on with doing at the start of the pandemic, two trees were planted in Bend and Redmond—trees grown from seeds of trees that survived the nuclear bombing of Hiroshima in 1945. The trees are among 45 "Peace Trees" planted in Oregon as part of a worldwide project aimed at promoting peace and resilience on the 75th anniversary of the end of World War II. 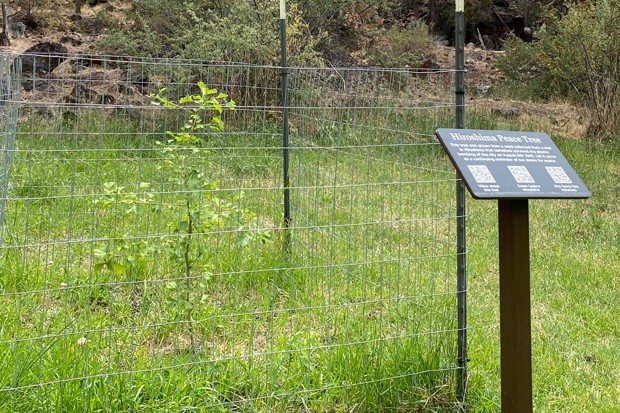 Oregon resident Hideko Tamura-Snider was 10 years old when her mother was killed in the bombing of Hiroshima. Tamura-Snider survived and eventually wrote a children's book about the experience, titled "When a Peace Tree Blooms." She also founded the One Sunny Day Initiative, with a mission "to educate the public about the consequences of the use of nuclear weapons and to plant seeds of peace, hope and reconciliation among people of the world," according to its website.

According to an account from the Oregon Department of Forestry, in 2017, Tamura-Snider began working with Mike Oxendine of the Oregon Community Trees nonprofit to bring seeds from Hiroshima's surviving trees to places around the world—a project initiated by another nonprofit, Green Legacy Hiroshima. Oxendine sprouted the seeds, gleaned from gingko and persimmon trees, and enlisted the help of Jennifer Killian of Corvallis Parks and Recreation to care for them. When the trees were big enough, ODF began to distribute them around the state.

Bend's Hiroshima Peace Tree, a gingko currently about 3-4 feet high, is located in Hollinshead Park on Bend's east side. Visitors can find it on the eastern side of the park, a few steps east and north of the park's eastern-most barn and protected behind a small wire fence. The Bend tree was planted May 29, 2020. Redmond's Peace Tree, also a gingko, was planted April 30, 2020, at Redmond City Hall. The Oregon Department of Forestry maintains a map of all the Peace Tree locations around the state at the Hiroshima Peace Trees page of its website.

To get a tree, "Priority was given to Trees Cities USA and Tree Campuses USA in Oregon," ODF's January 2021 account describes. The City of Redmond has been a Tree City USA—a program sponsored by the Arbor Day Foundation—since 2005. Bend became a Tree City in 1991 and maintained that status until 1995, according to the City of Bend's website, and then again from 2004 to 2012.

"In 2017 the City of Bend and the Bend Park and Recreation District formed a partnership to reinstate and maintain the Bend's Tree City status," according to the City's website. "This successful partnership has provided resources to allow continued annual reporting and retention of the Tree City recognition."