Sustainable Agriculture in the High Desert 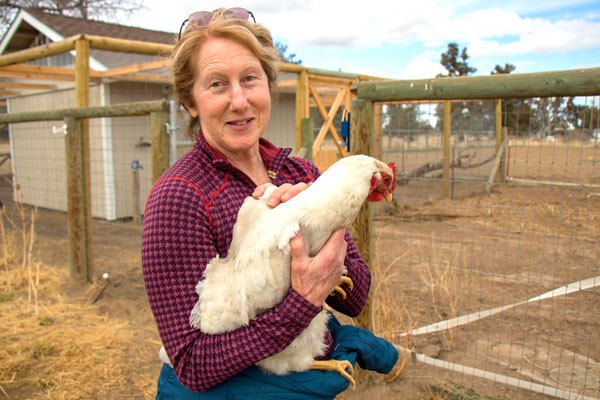 It was a gray and overcast morning when I arrived at Windflower Farms just east of Bend. With no cell service—and no sign to reassure me that I had arrived at the correct farm—I pulled up a gravel driveway to a small house nestled next to a barn. I could hear chickens in the distance and walked over to a nearby barn to find someone who could give me directions. A horse eyed my approach, gave a loud snort and trotted toward the barn—seemingly to sound the alarm that there's a visitor.

Gigi Meyer, a small, sprightly woman with salt and peppered red hair, smiles at me through a face of freckles. The 59-year-old has owned Windflower Farm since 2005, expanding in 2009 when her father bought a farm north of her land.

"Between the two farms we have a really biodiverse operation," says Meyer. "We've got flowers, we've got veggies, we've got fruits, we've got laying hens, we have dairy goats and horses."

Meyer has been a farmer for 13 years, but has been practicing horticulture for over 30 as an avid gardener. She grew up in Portland, but traveled the world for many years as a journalist and also worked as an artist and horse trainer in her years before the farm.

"When I was little my dad had a cattle ranch in eastern Oregon," said Meyer. "Those were the happiest memories of my childhood, riding horses through the sage brush and through the wilderness."

The windflower, also known by its Latin name, "Anemone," is considered good luck and is thought to predict rain by closing its petals. Meyer says she loves the simplicity of the iconic flower's shape and, like seeds carried by the wind, she feels that she was guided by some force of nature to take root on the 20-acre farm in Alfalfa, 15 minutes east of Bend.

Meyer and her small four-person crew grow organic fruits and veggies, but they also cultivate flowers, raise milk goats and laying hens, board horses and even host a beehive in the summer months.

The laying hens and milk goats at Windflower Farm are certified Animal Welfare Approved, a label with strict guidelines dictating sustainable farming practices and a high level of animal welfare from birth until death. It's the only certification that requires farm animals to have access to pasture land.

The Saturday I visited the farm, Meyer's crew was covering their new greenhouse with rolls of plastic. It wasn't windy, a rarity she says, making it an opportune time to finish building the new hoop house funded in part by a U.S. Department of Agriculture grant through the Environmental Quality Incentives Program. The shelter will help extend the growing season by protecting plants from severe weather.

"The greenhouse growing is so important. The only way we would have a harvest this next week is because we have greenhouses and it also allows us to grow things that we couldn't otherwise grow," says Meyer. "We cannot grow enough heirloom tomatoes—everybody wants them."

Gia Matzinger works on the farm as florist, growing, cutting and arranging the flowers. Her overalls are covered in dirt and she's carefully pulling weeds from her flower garden. Matzinger has bounced around all over the west, attending college in Washington with a brief stint living in Southern Oregon. Then three years managing a farm in Pescadero, California, before finally making her way to Central Oregon to work for Windflower Farm.

"It's sort of an art form in its own that involves some level of science and environmental science. It's just really dynamic work—you never know what's going to happen next," says Matzinger. "I especially love the flowers because it's got an element of art and getting to use your creative side."

The flowers will be planted adjacent to rows of veggies and other crops, creating biodiversity that is good for the health of the soil and the microorganisms that call it home. They rotate their annual crops to replenish the soil along with cover cropping—plants used to manage soil erosion during the winter months.

Their approach is entirely different than mono-cropping, popular with large corporate farms which involves planting and cultivating a single crop on the same land year after year. This depletes the soil and invites insects that are often fought off with pesticides.

"You end up having an unhealthy ecosystem in a monocrop," says Meyer. "It's not mimicking nature, there is no mono-cropping in nature. There's always relationships going on." 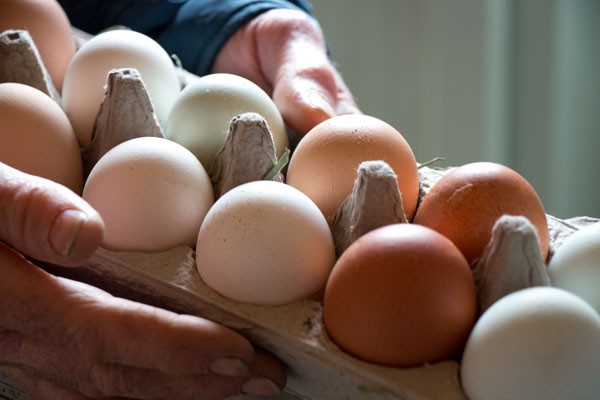 Much like the diverse ecosystem she has cultivated at the farm, Meyer values the array of relationships she has created throughout her 13 years operating Windflower Farm.

"Relationships, that's part of the sustainability factor for me is to find clients who I can depend on, who can depend on me," says Meyer.

Windflower Farm runs a small CSA, or Community Supported Agriculture. They currently have five seasonal CSA members who receive a box of fresh produce every week. Their on-demand CSA is more popular, however, as it doesn't require a weekly commitment. After the chefs she has partnered with at various restaurants pick out their harvest for the week, Meyer calculates how many more totes she can put together with a variety of produce and sends out the list to her 100 or so clients.

"The clients that we have become such loyal customers of the farm. It's a whole piece of understanding—the value of what they're buying, at a value that we're protecting this landscape and we're protecting everything that comes to this farm," said Meyer. "All the bees and all the birds and the soil organisms."

Matzinger arranges floral bouquets for bridal parties or if they'd prefer, guides them through picking loose stems to arrange themselves. Windflower Farm also runs a small flower CSA, with regular restaurant clients like Jackson's Corner in Bend ordering fresh flowers to garnish their dining tables. Their flowers are currently sold at Newport Market and will soon be available at The Humble Beet opening in Devore's old location on Newport Avenue. Matzinger says that they are going to try attending the farmers market this year, selling their organic veggies, flowers and farm-fresh eggs.

"We're interested in maybe offering the option for folks to get a custom-made bouquet," says Matzinger. "I would be there and put something together based on what the customer is liking or feeling, depending on what kind of mood they're in."

Kevin Linde, the executive chef at Pronghorn, visits Windflower Farm once a week to pick out fresh veggies for his restaurant. April 10 was the farm's first harvest of 2018. Rosie Red Choy, Tah Tsoi, mixed radishes and garlic were just a few early harvest selections that Linde picked up in his morning visit to the farm.

Pronghorn has partnered with Windflower Farms for years, but when Linde joined the culinary team in 2012 he made it a point to support Meyer through special plates utilizing seasonal vegetables.

"She's really been great as far as committed to the authenticity of her practice and it's been awesome to be able to see the results in the product that she gives us," said Linde. "When I lived on the coast and we'd get salmon right out of the water, you don't have to really do much to the product when it's that good. You just kind of season it, dress it and let it sing itself."

Meyer's back isn't what it used to be and she doesn't perform as much manual labor on the farm like she used to, she says. As she gets older and thinks about the future of Windflower Farm, she hopes to mentor a young farmer to take over for her—perhaps even turn the farm into an educational space for students to learn about sustainable farming practices. 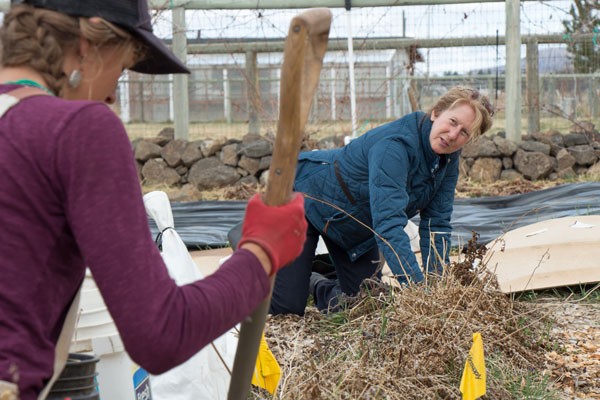 "I feel like I've created this thing," says Meyer. "It feels like a painting that's years in the making and I'm invested in it emotionally and physically."

If you're interested in signing up for Windflower Farm's veggie, flower or egg CSAs, visit their website at www.windflowerfarmbend.com.