The Hillbilly Moon Explosion brings its expansive sound to Bend during their first tour of the U.S. 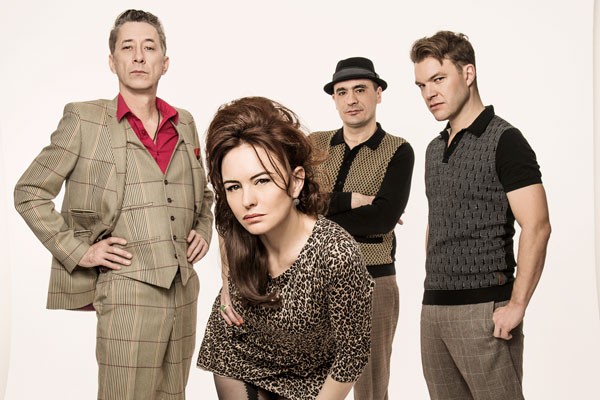 The Hillbilly Moon Explosion doesn't have a sound typical of other bands you see coming through Bend. The musically diverse four-piece band from Switzerland features the vocals of Italian-Swiss singer, Emanuela Hutter, blending an upbeat, raucous rockabilly style with blues, surf rock, swing and country styles to create a sound decisively its own.

Hutter and Oliver Baroni—who shares vocal duties and plays stand-up bass—have been at the core of the band since its inception in the late '90s. As with most bands and projects, lineups change over the years, but Hutton and Baroni are the anchors of the band's lineup.

"A good band member isn't just a good musician," Baroni says. "He can pick up the phone when you need him, he has his shit together, you can be on the road together. The longevity comes from finding people you can spend six hours in a bus with."

When it comes to recording, Baroni enjoys producing the band's albums. For three albums, the band used a producer and was happy to hand the decision making process to him. The producer would decide which take was best, but now Baroni has taken back creative control.

"I usually come up with a new clip of a song and we'll very soon approach our lead singer, Emanuela, to get an idea of how she'd sing this. That way we have some prose together," Baroni says. "The recording process, there are some you sort of stand in the room and record all together — we did an album like that in London once. This last album, the recording was part of the songwriting process. There are all sorts of ways to create."

The Hillbilly Moon Explosion released its last full-length album, "With Monsters and Gods," in 2016. Last week, the band released two new songs on Spotify, both duets with Sparky from the psychobilly band, Demented Are Go. Sparky originally appeared with The Hillbilly Moon Explosion on what has thus far been their biggest hit, "My Love for Evermore."

"I wanted him to sing with Emanuela," Baroni says. "At the time, he was fairly radical. It's a very unlikely duet. Since then, we've done quite a few collaborations. He can have his romantic side come out. Emanuela enjoys working with him; he's a really great guy. After years of one-offs working with him, we thought, what would happen if we did a whole album of duets? We've already put four new tracks in the can. Let's release two of them to get the ball rolling."

The band has toured all over Europe, and even though they've recorded in San Diego in the past, this will be the first tour in the United States. Baroni looks forward to seeing old friends in Southern California during this tour and ultimately visiting the Pacific Northwest and seeing what it's like.