Sydney the Cygnet Lives On 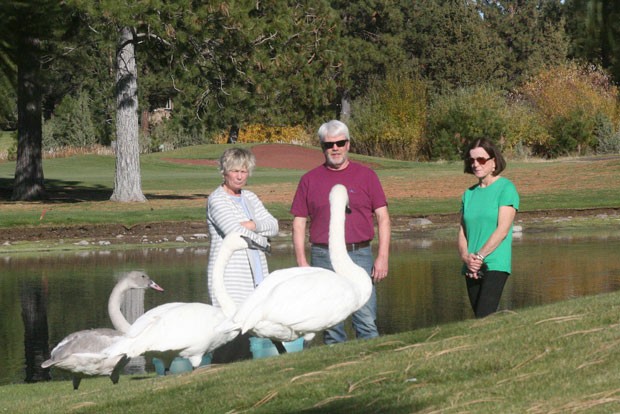 Eloise, the surviving trumpeter swan from an original pair brought to Aspen Lakes, has lived quite a life. She survived the death of her early partner and has lived long enough to gain some friends among the residents.

It was love at first sight for Robin Gold—one of the residents at Aspen Lakes in Sisters, and Eloise, who was surviving all alone. Robin was very concerned for Eloise's welfare, which led her to seek help from other residents. Pam Oliver and Tim Ross, who stepped up.

Ponderous waterfowl with a lot of body mass to support, swans do not do well out of water. In winter, walking around on the ice-covered pond and snow-covered meadows surrounding the pond was bad news. That led to some serious physical problems for the swan, solved when Gold asked for help getting a bubbler so Eloise could have open water on the lake.

Ross bought a large air pump, that, when piping was installed into the pond, provided a series of very strong air bubbles that prevent the pond from freezing. That, coupled with a new and healthier feeding schedule, provided by Pam Oliver and Gold, not only gave Eloise the food and physical help she needed, but put her on the path to the health she'd need when (and if) she got a new mate.

And what do you know, that's exactly what Gold, Oliver and Ross had in mind. With some pretty fancy planning and a load of donated money, Gold found a male Trumpeter (Pete) trumpeting for a mate. Before you could say "Happy Honeymoon," he was shipped to Aspen Lakes —and, thank goodness — it was "love at first sight."

Earlier this summer, Ross risked his good health and welfare searching the nest Pete and Eloise constructed to see if they'd laid any eggs. With the threats of injury to himself, and of causing Eloise and Pete too much stress, Ross and Gold called off the search. But then—as it is when one is patient, Mother Nature answered Tim's question when a tiny, healthy-looking cygnet appeared, swimming between Pete and Eloise.

Now, here it is about three months later. The cygnet, named Sydney, is about as healthy as anyone could ask, and contrary to what the Trumpeter Swan Society usually does in fall—removing cygnets and taking them to the Oregon Department of Fish and Wildlife's Summer Lake Management Area to live with other youngsters—Sydney is going to spend the winter with mom and dad.

Why all the flap and glitter about an old Trumpeter female and her younger husband? Oliver has this to say: "Eloise became an important part of my life when my 2-year-old grandson Skylar discovered her. On Sunday mornings, Skylar and I bonded when looking for animals while we were out walking. By far, Eloise was his favorite animal to visit. On days that Robin was not available to feed Eloise, I would take food to her.

"On the occasions that Skylar was with me for the feeding, he spent time babbling away talking to her. It became a special time for us to go visit Eloise. So when Pete arrived, Skylar was over the moon. He would insist that we go visit Pete and Eloise. He loves to watch them eat and swim. When they honk, his eyes light up. Seeing the swans through a 2-year-old's eyes has made the experience of caring for the swans that much more important."

The man who kept Eloise alive and off the ice last winter added, "You asked me why I help out with the swans. My answer is, (with a big smile) 'Why wouldn't I help out?' My neighbor Robin is a passionate wildlife rehabber who is leading the charge; the other neighbors are all supportive and proud of our swans living on Cyrus' Lake Aspen; and the swans are just cool birds! I tend to be a problem solver, so whenever Robin needs something, I enjoy stepping in and helping out however I can, whether it is installing a bubbler to keep the ice clear on a section of the lake, or putting my waders on and going out to check on the nest.

"Also, I can now put 'Swan Fencing' on my resume after going head to head with Pete and Eloise, defending their nest with only a broom for defense. I will always remember coming out of the cattails to encounter the two of them with their wings outstretched, heads high and hissing at me. That's when I realized just how big they are since they were eye to eye with me. Luckily, it all ended well. Sydney hatched the next day."

So that's where Eloise, and Pete-the-happy-pappy are at this moment. If left to do what swans love to do, teaching their young to fly, and blasting holes in the sky over and around Lake Aspen, winter would be very busy for them and their human neighbors.

But the Trumpeter Swan Society and ODFW thought better of that fun of flying and clipped the swans' feathers. If you're worried Sydney will never fly, know that next spring, she'll be relocated to Summer Lake. When her new flight feathers grow in, she'll be out there flying with the other wild swans.