Taking the Plunge into Gravel E-Biking

I've cranked more than a few miles over the years on bicycles: road bikes, mountain and my true passion, gravel. I'm not speedy but I can go the distance. I don't mind rough terrain. I love a long climb and a rippin' descent. And most of all, I love exploring, especially the backroads of Oregon—even better if I find other people who share my passion.

But I have to admit, I squirmed and winced at the thought of an e-bike. I was all for it when my pal Chuck used one: it was great to have him buzzing next to me through Skyline Forest when normally I would have to wait. But I didn't need an e-bike. 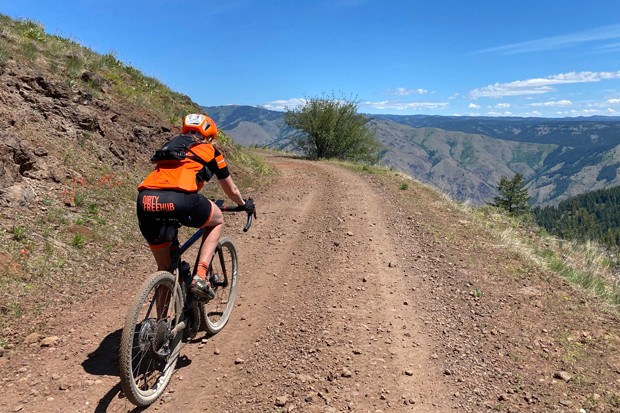 Then my husband and I agreed to have a vacation with friends of ours who are a whole lot faster than me. Chris is a Cat 2 bike racer, he can also bunny hop and hockey stop his bike with the best of them. Kelly is the fastest runner I know, not to mention she's a whole lot younger than me. So, I agreed to take the e-bike with me on our vacation to Joseph, Oregon.

My first trial was before my friends arrived. I took the e-bike on a ride from the Snake River straight up to the Hell's Canyon Overlook. The first 2 miles were 15% grade. This was not the brightest of all ideas.

I tested the bike on a flat road for a mile, then we started up the steep pitch. I turned on the lowest power setting, honestly terrified that the bike was going to take off. I worked like a dog, with the power making the climb more reasonable. The incline was still hard to technically ride and when I stopped, it was hard to get going again. But I made it up to the glorious overlook.

Then my friends arrived and we took off on a big ride to visit the Zumwalt Prairie: 56 miles and 4,000 feet of gain with a mix of pavement and gravel roads.

The route started by dropping 2,000 feet on pavement. The e-bike didn't feel much different than my normal gravel bike. Because the power cuts out above 20 mph, the only advantage was the extra 10 pounds from carrying the battery.

Related Where Can Your E-Bike Go?: Not on non-motorized trails in Oregon, for now

Where Can Your E-Bike Go?
Not on non-motorized trails in Oregon, for now
By Chris Miller
Local News

Then we headed up a steep gravel road that sliced through the preserve. I started off with the lowest power setting, then quickly realized that I needed more power. For a change, I wasn't peeling off the back from being dropped on a 10 to 15% climb, but instead could be right with my friends. Sometimes, I would jet ahead to take a picture. Nobody waited for me and I thoroughly enjoyed the 11 miles through the preserve. 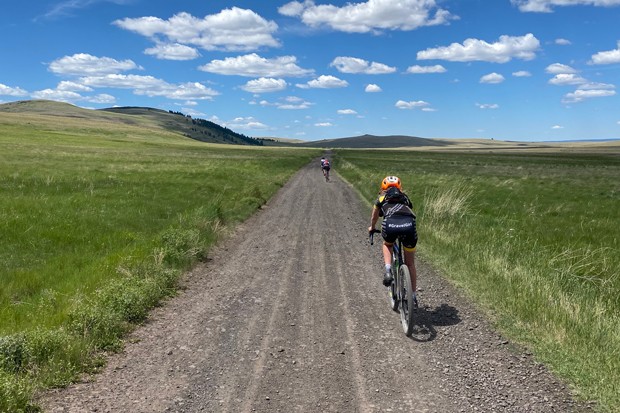 When we topped out at the rolling grasslands, I could adjust my efforts accordingly. As long as I was pedaling, the e-bike was helping me. Sometimes I would even pause to look for wildlife. Then I could easily catch up.

At the end of the ride, after four hours and 20 minutes, I had only a little power left on the battery. I was thrilled I didn't run out of juice!

As for the group, we all had to adjust to my newfound power. I learned to communicate more when I decided to pass and to not blast by the group on a steep climb (frustrating for the other riders). We all agreed having me on the e-bike made the day a lot more fun.

My two cents: If you ride with people who have varying speeds, I recommend trying it. Most bike shops sell e-bikes and several shops specialize in them. But before you hop on a gravel e-bike, realize that you still need great bike handling skills.

Overall e-bikes are about giving up the ego; if this helps you enjoy more of the great outdoors, embrace it!

As for where to ride an e-bike, Dirty Freehub (dirtyfreehub.org) has over 8,000 miles of curated gravel bike routes, including which routes permit e-bikes.