Tales From The Lopside | The Source Weekly - Bend, Oregon

My boyfriend and I are in a long-distance relationship (for almost four years) that works very well, talking daily and seeing each other every two months. The problem is that it feels like he has much more love for me than I have for him. (He's totally head over heels and expresses this constantly.) I absolutely do love him, and I tell him frequently. But my love intensity just does not match his. Additionally, I should mention that I've tried to leave him in the past. I didn't think the relationship was serving me. He is married and technically unavailable. (He is working toward dissolving the marriage.) Also, he works hard but has no financial resources. I do want to stay in the relationship, but I'm not sure how to deal with the imbalance in expressiveness. I don't want to be inauthentic. 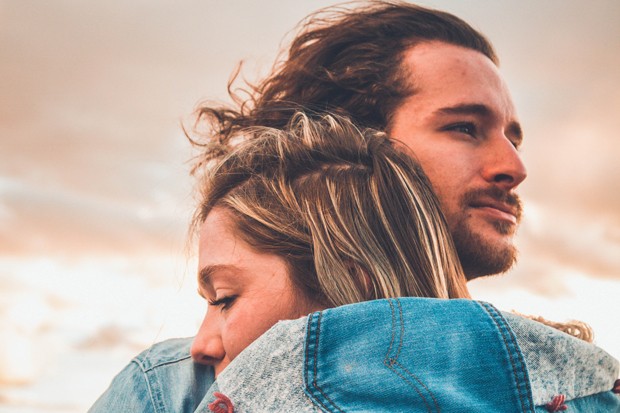 You're dating a man who not only is still married but needs to crowdfund his divorce.

Many women believe it's somehow nobler if they love a poor dude, telling themselves (and often the guy) that they don't really care about money. But as I often point out, because women are the ones who get pregnant, female emotions evolved to make women feel bad—resentful, angry, screwed over—when they get involved with men who are (for example!) still "married and technically unavailable" and have "no financial resources." Boyfriend: "Hey, honey...got ya a great birthday present, and you won't even be charged for it till your next credit card statement!"

And even if a woman is a staunch feminist, all "I don't care who the earner in the relationship is," the psychological operating system driving us right now is adapted for ancestral times and the problems that arose then. So it just keeps on keepin' on, pushing a woman to go for men who can "provide," even when she's on the birth controlliest birth control (like a copper IUD — basically bioterrorism for sperm, backstopped by a Ukrainian nightclub bouncer).

In other words, you are not getting the long end of the stick here, financially or commitment-wise, and evolution has programmed you to be nagged by feelbad emotions until you do something to change that. Your boyfriend, meanwhile, surely has some feelbad of his own. Because men coevolved with women, male psychology leads men to anticipate that female romantic partners who feel shorted on cash flow and/or commitment will soon be conducting their exit interview.

In light of this, your boyfriend's expressing love in the manner of a burst water main may be a form of "mate guarding," evolutionary psychologists' term for attempts to fend off mate poachers and keep one's partner in the relationship. Because we humans have an evolved motivation to reciprocate—to give back what we get in equal measure—it's possible that the more romantically expressive your boyfriend is, the more you're led to feel you're shorting him on what he seems to be owed.

But is the apparent emotional asymmetry here actually a problem? Many people do make the assumption that romantic partners' love should be 50-50 and that there's something wrong with the relationship when it isn't. However, what really matters is whether there's enough love on each side to keep the partners together—especially in the face of any costs imposed by a partner or the relationship.

Accordingly, consider whether the long-distance aspect might be staving off feelings and conflict that could come out if you two were living together. Research repeatedly finds that women tend to resent male partners who aren't their equals or betters in job status and earnings. For example, a study by business school professor Alyson Byrne finds that a woman's having higher job status (and the money that comes with) often leads to marital instability and divorce. She and her colleague even find that women experience "status leakage," finding the status they've earned through their work diminished by virtue of their having a lower-status spouse.

As for you, you say you want to stay in the relationship, presumably because you love your boyfriend. However, it's also possible that your being in the relationship for a while—almost four years—is keeping you in the relationship. Consider what economists call the "sunk cost fallacy," the human tendency to keep investing in a project based on the time, energy, and/or resources we've already "sunk" into it. Of course, the rational approach is deciding to continue based on whether the investment will pay off sufficiently in the future.

Looking at your situation that way should help you make a decision. At the moment, as I see it, there's nothing standing between the two of you riding off into the sunset together...pulling a wagon carrying his current wife, their couples therapist, a divorce mediator, and several collection agents.