Entertain friends and family with these turkey tidbits this holiday season

Thanksgiving is a great time to have the turkey talk with friends and family. Wild turkey, that is. So, here are some facts and falsehoods for you to entertain your holiday dinner guests. 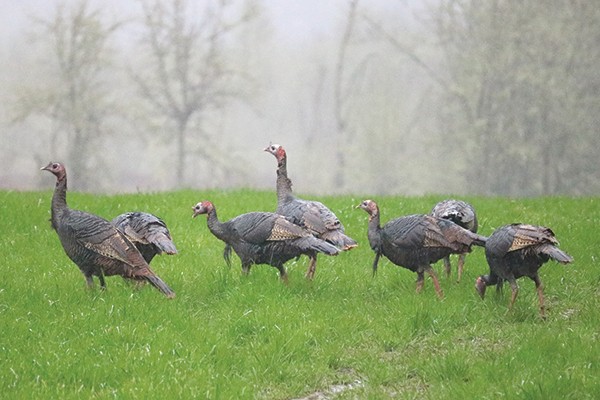 What's the number one call a turkey makes?

If you're thinking "gobble, gobble, gobble" you might have to have a double helping of Brussels sprouts. The "yelp," a soft or loud call, is the primary turkey form of communication. Offered by both toms and hens, it's the equivalent of "I'm over here" or "Get over here!" depending upon the volume of the call. Clucks, cackles, and purrs are also common calls, as well as the "gobble" which is similar in attention grabbing to a rooster's crow.

Are wild turkeys native to Oregon?

No. Historically, birds occurred from the central U.S. to the East Coast and South into Central America. Oregon is one of nine states in the lower 48 that did not have native turkey populations. Pioneers released farmed-raised birds into the Oregon wilds in the 1890s but these populations never took. Birds were then introduced into Oregon in 1961 and subsequent releases by the Oregon Department of Fish and Wildlife and the Turkey Federation have also been very successful—so successful that ODFW has developed a hunter-farmer program called Hunt by Reservation that allows hunters to bag a bird on private land.

Who domesticated the wild turkey?

Generally, the Mayans of southern Mexico are often credited with domesticating wild turkeys over 2,000 years ago. In the American Southwest, the Ancestral Puebloans learned to keep turkeys not so much for food but for their feathers (at least, initially). Birds might be free-roaming during the day but were penned up at night or kept in old rooms and fed a diet of maize (as indicated in ancient scat found in Southwestern ruins.) And turkeys are the only native North American bird to be widely domesticated.

Why did the Ancestral Puebloans keep turkeys?

Starting around 1 C.E., the indigenous people of the American Southwest kept turkeys not for meat but for feathers. Though rabbit-skin blankets were all the rage at that time, the Ancestral Puebloans figured they could domesticate turkeys and collect the downy feathers to be woven with strands of yucca cordage into warm blankets. To create a 3x4-foot turkey feather blanket required over 600 feet of cordage and nearly 12,000 feathers; hence, having captive birds allowed for harvesting large numbers of feathers as the birds molted. 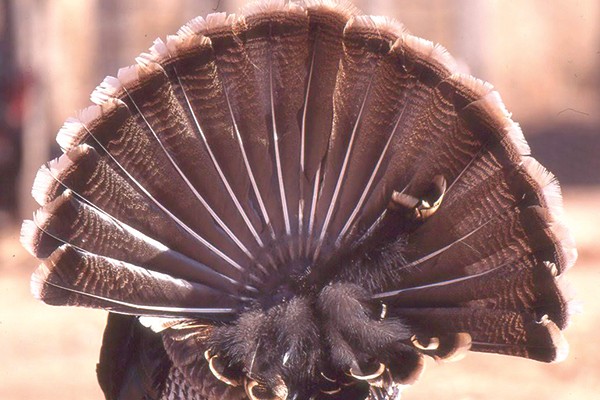 What's the difference between a wattle and a snood?

No, seriously. Wattles and snoods are the fleshy folds of skin or appendages on a turkey's neck and head that are used in mating displays. When excited, the wattle on a tom turkey engorges with blood and may even turn color to red, white, or blue. The snood is the fleshy appendage that hangs off the turkey's forehead and drapes over its bill. The bigger the snood, the better chance of attracting a hen. Snood length may also be a dominance factor between male turkeys of different ages; those with smaller snoods defer to those with large snoods.

Do turkeys have beards?

Yes, but not like a human's beard. On a turkey, the stiff, bristle-like beard resembles a short horse's tail and projects from the bird's breast. Mostly just toms have beards but some females sport them. On an older male, the beard may be about 10 inches long.

Did the first Thanksgiving include turkey on the menu?

Good question. Often cited as the "first Thanksgiving," in 1621 the newly-arrived New World Pilgrims and local Wampanoag Indians in the Plymouth area shared an autumn meal. Though turkeys were native to the region and the Pilgrims had brought some of their own domesticated ones from Europe, the birds may or may not have been consumed. Historical records indicate the Pilgrims went bird hunting "...our governor [William Bradford] sent four men on fowling..." but this might refer to the hunters taking other birds such as ducks or geese.

What's up with turkey and tryptophan?

Tryptophan is an amino acid found in turkey meat that the body uses to make Niacin (Vitamin B3) and the hormone serotonin, which makes one relax to the point of sleepiness. Many drowsy diners point to tryptophan as the reason they want to take a nap after a Thanksgiving meal. However, new research illuminates that the carbs on the table – green bean salad, mashed potatoes, gravy, mac and cheese, and desserts – may be the culprit. The excessive amount of food and alcohol consumed affects insulin levels and causes some drowsiness. Along with the insulin dip, blood races to the digestive system, adding to our fatigue. The cure? Eat slower, have smaller portions, pay attention when your stomach says it's full, and don't blame the bird for your gluttony!

Related Giving Thanks for What the Land Provides: Local indigenous farmer is part of a growing nationwide movement to restore native foodways, and a connection to the land

Giving Thanks for What the Land Provides
Local indigenous farmer is part of a growing nationwide movement to restore native foodways, and a connection to the land
By Nicole Vulcan
Outside Features