Monkless Brewing is far from new in Central Oregon, but it's the only brewery currently specializing in Belgian-style beer. Now is a good time to learn (or re-learn) about Monkless, as they'll soon have two locations! The owners just signed a lease to the "red building on the river," downstream from the Old Mill, formerly leased by Craft Kitchen. There, they'll bring their Brasserie concept, in addition to staying open at their current location on High Desert Lane (albeit with most likely shorter hours, the owners told the Source). I'm excited to see what they'll bring to the area—but not wanting to wait to drink their beer again, I made a stop at their current taproom to have one of my favorite beers in Central Oregon, Trinity Belgian Tripel. 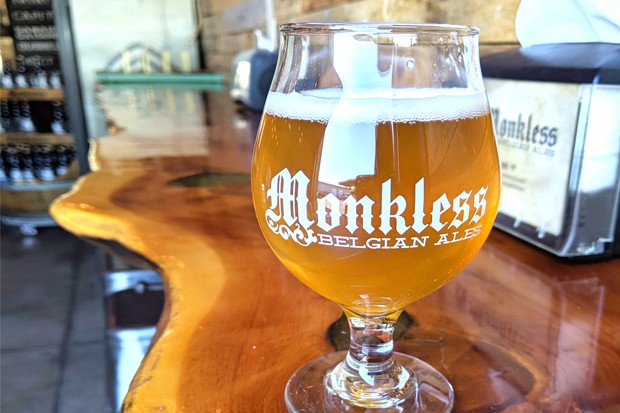 First, let's talk about the basics of a Belgian beer. The utmost important ingredient in a Belgian beer is the yeast, bringing important flavors and setting it apart from other beer styles. Belgian yeast is quite expansive, but what we mostly see in the U.S. are beers that offer the flavors of bananas and clove. Some yeast strains can be more or less "spicy," depending on the strain. Trinity is a beautiful mix of banana and clove—straight forward and working well, with the ABV at 8.1 percent.

When you bring the glass to your mouth for that first drink, take a deep breath in. With Trinity, you get a lightly sweet banana aroma with a very slight touch of clove. It tempts the taste buds. The first drink brings an explosion of coriander, providing a much-needed level of what can be perceived as citrus. It finishes with a tang from the alcohol and coriander along the side of the tongue. You really need to take a few drinks and savor this beer to get the full flavor. The mouthfeel is medium-low bodied due to the ABV. The high carbonation balances out that mouthfeel to provide brightness. Really, coriander is the star of this beer. If you love it (as I do) then this beer is for you.

Trinity is an excellent example of a Belgian beer. The yeast plays a big role, only to complement the coriander. The tangy botanical qualities (along with the clove) bring a level of flavor balance that makes a beer lover smile. It drinks like a beer with a much-lower ABV because of its balance of flavors versus its alcohol burn. I believe the forwardness of the coriander and the highlight of the Belgian yeast make this balance possible. On my drinkability scale, I give Trinity a solid 3.5. I would give it a 5, but some beer drinkers might find the strength of the coriander overpowering. Also, Belgian style beer isn't for everybody—but what beer is?

I highly recommend anybody with an interest in beer (newbie or seasoned) make a pitstop at Monkless. If you haven't tried a Belgian-style beer, this place will give you shining examples, so grab a taster tray and see what you think. At the very least, you'll try something new—the very best part of being a craft beer enthusiast.