Taste the Lime, Smell the Roses

A refreshing drink for summer entertaining—before or after July 4

by Ari LeVaux, Flash in the Pan

Summer in the Mountain West doesn't reliably start until July 4. Then, the scramble begins in earnest to squeeze as much joy from the long hot days as we can.

Lime is available all year but is never more in season than summer. Hot times mean an increase in the need for thirst management, a task for which limes are exceptionally qualified. 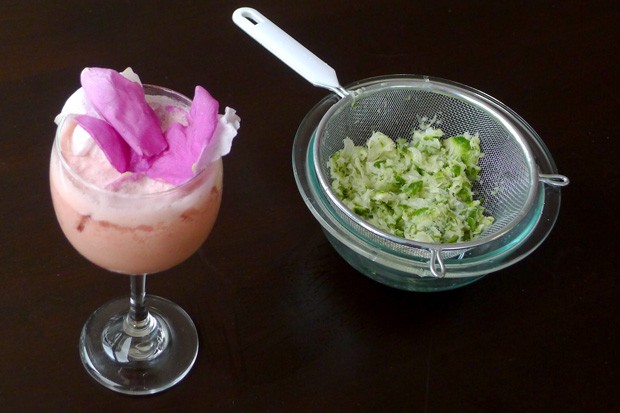 The inhabitants of the Caribbean coast of Colombia aren't strangers to limes, thirst, or some quenching places where the two intersect. In a kitchen in Santa Marta, I had a lesson in how to make a cool, frothy beverage called limonada de coco. A mix of coconut milk, lime and sugar, there isn't usually a lot to it. But in teaching me his special method, my teacher, chef Jairo Villafane, taught me a trick that changed my lime game for good. I have not seen or heard of this technique anywhere else, including the countless recipes for limonada de coco I've read.

Villafane comes from a long line of great cooks, all of them women, and has cooked in several prestigious Santa Marta restaurants. In his small home kitchen, he washed six limes and cut them in half. I assumed he would juice them with a hand-held lime squeezer, an ubiquitous tool in the region. Instead, he put the lime halves in a blender, covered them with water, and blended them briefly until the lime was thoroughly worked, but still composed of recognizable bits of peel, pulp and pith. He then poured the chunks through a strainer and squeezed on the remains to get as much juice out as possible.

Every other recipe for limonada de coco uses plain lime juice—a waste of both time and lime once you know Villafane's trick. His method yields more lime flavor per lime, and quickly. Beyond the limonada de coco, Villafane's blender technique can be used in the making of other limey dishes, too, from marinades to sauces to other drinks. It works on lemons, too. Lemons can be blended (without the seeds) all the way into a zesty, versatile foam that improves lemonade, lemon bars and everything in between.

The flavors in my rosy, strawberry limonada de coco drink work together seamlessly. The result is complex, yet smooth; sweet, bitter, and totally quenching. tweet this

But lime is too potent for that. Its flavor is more complex than a lemon's. The two fruits are similarly acidic, but a lemon's acid comes exclusively from citric acid, while a lime contains a cocktail of acids, including, citric, malic and succinic acids. Limes also contain bitter notes, absent from lemon. A lime is like a tangled jungle of acids and bitters, while a lemon is just a simple, bright sunbeam.

Villafante's limonada de coco has made me some new friends. As I've tweaked the recipe, volunteer tasters haven't been hard to find. During my research, some of my co-vacationers determined that limonada de coco makes a good base for a modified Moscow Mule. I took my drink in a different direction, adding strawberries and rose petals and sometimes a shot of gin.

The flavors in my rosy, strawberry limonada de coco drink work together seamlessly. The result is complex, yet smooth; sweet, bitter, and totally quenching.

This recipe depends not only on the blender lime technique but also a rose petal trick, researched with petals from the salt air roses that grow wild in my summer hideaway, and confirmed with unsprayed landscape roses. Like the blender technique, the rose trick is broadly applicable.

You don't consume the rose petals, but smell them as you eat or drink your way around them. Their sweet fragrance tricks your tastebuds into thinking the drink is sweeter than it is, while drawing out the floral notes of the strawberries.

The perfumey feeling the petals add to the drink would be tarnished if you actually chewed a petal and tasted its soapy, astringent flavor. Instead, smell the roses and taste the fruit. It's summer, after all.

Stop and Smell the Roses

This recipe is broken into two parts. The first part is for a classic limonada de coco, followed by my modified, rosy strawberry version.

Remember not to add the ice until the end, otherwise the coconut milk will congeal unpleasantly. On that note, canned coconut milk is preferable. When Villafante taught me how to make other coconut-based foods, he made fresh coconut milk, but he maintains that for this drink, canned is best.

Serves 2
2 limes, cut into quarters (or halves, if your blender is good)
½ cup water
2 Tablespoons sugar (or to taste)
½ can coconut milk
Handful of strawberries
Ice
Rose petals, rinsed

Blend the lime and water until it's somewhere between chopped and a slurry, with large chunks that are recognizably lime-based, about 3 to 10 seconds. Pour through a strainer, squeezing the remains to get all the juice. Pour the lime extract back in the blender, add the coconut milk and sugar, and blend. You now have a classic limonada de coco, a la Jairo Villafane.

To make it a Coconut Rose, add strawberries and blend again. Toss the rose petals with the ice and put some rosy cubes in a glass. Add gin if desired.

Pour the pink frothy drink over the rosy ice, and garnish with more petals.

You are now clear to smell the roses and quench your thirst, all in a single sip.

More by Ari LeVaux, Flash in the Pan