How five counties came together to complete the large-scale recovery of a climber's body on Mt. Jefferson

On July 31, search and rescue teams from five counties were sent into action to retrieve the body of David Freepons, a 68-year-old climber who passed away after a fall on Mt. Jefferson. Freepons, an experienced climber from Kennewick, Washington, was on an expedition July 25 on the mountain with several friends—also experienced climbers—when he reportedly slipped on a glacier and slid. His body was found several hundred feet from where he fell, in a precarious spot on the mountain that made getting him out a challenge.

Freepons' cousin, Alys Freepons Means, described David Freepons on her Facebook page: "In recent years, Dave had passionately pursued mountaineering and ascended a variety of challenging terrain. He died doing what he loved, but has left a place within our extended family that can never be filled."

After a week of behind-the-scenes coordination, support and planning led by David Pond, the Jefferson County Search & Rescue coordinator and emergency management coordinator, the team was able to safely extract Freepons from the mountain. But these missions aren't as easy as just going up the mountain or sending in a helicopter, as Pond explained.

Pond told the Source that once he was familiar with the situation, he knew that it would take a big effort to complete the mission, and that Jefferson County SAR wouldn't be able to do it alone.

Pond tried to contact the National Guard to make this mission one of those special circumstances, but that didn't elicit the hoped-for response. This meant Pond would have to think outside of the box with his coordination efforts, reaching out to other counties to see what could be done. This is something Pond says his small team doesn't normally do, but the situation called for more pieces than usual, he said.

Linn County brought in gear on horseback to the Pacific Crest Trail, about 10 miles into the route the teams needed to travel, which lightened the load for the crew that was hiking on foot. Even a former member of Benton County's SAR, who now lives in Wisconsin, was called for help because of his familiarity with mapping that mountain and the layout of Mt. Jefferson. But knowing where you need to go and getting there are just the first steps in a long mission like this.

"The main thing we needed to do is to get him off the mountain after we got there," said Pond. 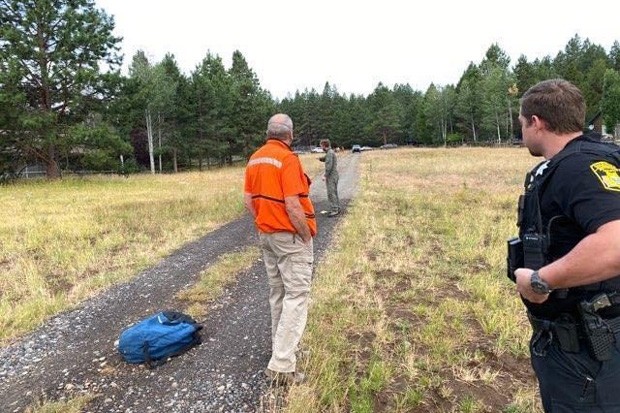 Once the crew reached the body and got set up for extraction, they rested until around 3 am before they readied for the arrival of a helicopter. To get permission to have a helicopter land on the mountain, SAR has to reach out to the U.S. Forest Service in that particular district. Just because they ask doesn't mean it will always be permitted, and conditions might not even allow for a safe extraction. This time around the helicopter got the OK, and one was sent in from Leading Edge Aviation in Bend.

There are only certain routes that helicopters are allowed to take when transporting a body, Pond explained. Pilots can't fly over any main highways, so options like landing at airports in Sisters or Redmond were out of the question. This meant they had to make a landing in Camp Sherman.

Around 40 people were assigned to the mission, the majority of whom were volunteers. Getting the extraction mission prepared took about a week to figure out logistics, conditions and best plan of action. In that span, Pond says he had people calling in saying they were going to hike up and retrieve the body themselves. Pond says this is something that happens often when a mission is in the preparation phase. Usually, once he explains the process to people, they decide not to go on their own extraction mission. Solo rescue missions such as that can force SAR to have to rescue multiple people instead of one, and further complicate the plan in progress, he said.

With unpredictable conditions on the mountain, patience is a key part of being in SAR, Pond said—as is being ready for anything. "There's always an obstacle in the way," said Pond. "Teamwork and coordination are the biggest thing. This was definitely the biggest one [mission] I've been a part of by far. Everyone supported each other and we were all on the same page."

For adventurers in the area, Pond reminds recreationalists to always be prepared. Even experienced hikers or climbers, like Freepons, can get into danger. SAR teams are there to help, but they don't get joy from seeing people hurt or in danger on trails, Pond said.

"Work your way up to adventures and climbs like that. None of them do that on a whim. They plan for weeks. I need that gear, this gear, they check weather forecasts," reiterates Pond. "Be prepared for anything, like inclement weather or injury. I tell people to bring enough supplies to last at least 24 hours on their own. Make a plan, let people know where you're going to be. If you do injure yourself and you need to make the 911 call, we'll tell you to stay put and make yourself visible."