There's a lot to unpack in Jeff ("Chasing Ice") Orlowski's new documentary, "The Social Dilemma"—the least of which is whether any of its sobering and lucid information is going to reach the people that need to hear it the most. On the film's most basic level, it focuses on different tech experts from Google, Facebook, Instagram and more sounding the alarm about where social media is most assuredly headed over the next few decades.

I don't think it's a secret anymore that social media can be bad for us, depending on how we interact with it. We're all very aware that our data is being used to have our own interests marketed and sold right back to us within seconds. The information found throughout "The Social Dilemma" is mostly all things we've heard before—but compiled together in one easily digestible package makes it profoundly more alarming than I've ever thought it could be. 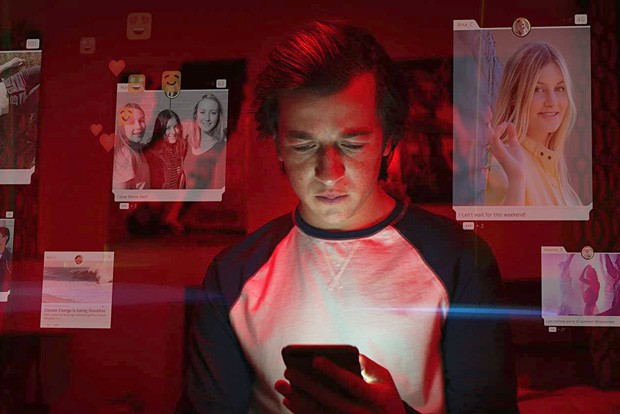 But there's also a flip side that I don't think "The Social Dilemma" explores as much as it could. Ultimately, how we are affected by the internet, and social media, in particular, is directly related to how we choose to use it ourselves. The technology itself isn't inherently evil, and neither is social media, and clutching our pearls as we pine for the good old days is inherently useless and unhelpful.

Technology isn't ever going to move backward; instead, it's only going to get faster and smarter until Elon Musk finally starts selling us chips for our brains so we can surf the Internet through our eyeballs. But why blame technology for that when it can only be programmed by humans? Blame Elon Musk. Blame surveillance capitalism and the unending quest for the maximization of profits.

In the film, former Google employee Tristan Harris describes emerging tech as a "simultaneous utopia and dystopia," but blaming tech for that seems like a copout. Don't get me wrong, there's a lot of very real, very scary stuff in this movie, but all the real power from "The Social Dilemma" comes not from the alarmist hand wringing, but when it focuses on the very real dangers inherent in polarization and the Facebook algorithm's attempts at curating each user's tastes.

Let's say your uncle posts on Facebook about his belief that the Earth is flat. An algorithm sees that and says, "Oh, this guy believes the Earth is flat, let's send some targeted info his way about Q-Anon, Pizzagate and how Tom Hanks is King of the Pedophiles." But then you post something about your love of RBG, NPR and OPB, so that same algorithm fills your feed with more like-minded ideas and people. Now you and your uncle are both existing in two separate echo chambers, unable to relate or empathize with each other because you're ultimately being fed completely separate diets of information and news. Hence, we become so completely polarized that family members can become enemies without saying a word to each other.

It's only going to get worse. Technology isn't going to go backward. Deep fakes will look so real in five years that it will become impossible to tell the difference between actual fake news and reality. But here's where the problem lies: deep fakes and algorithms aren't born; they're written by intelligent men and women, most of whom aren't evil or driven to divide the world in half.

My fear is that reactionaries will watch "The Social Dilemma" and think it spells out that we must limit technology and ban all social media in general, because somehow that's easier than holding the tech giants accountable for what they do with the technology. Algorithms don't have ethics, but Mark Zuckerberg does (or at least he's supposed to). Musk, Amazon owner Jeff Bezos and their ilk are the problem—not Amazon itself, or Snapchat or Instagram.

But believe me, the irony of watching this movie streamed on Netflix is not lost on me.

Speaking of The Social Dilemma