That Smoke? It'll Be Around Til at Least Friday | Local News | Bend | The Source Weekly - Bend, Oregon

That Smoke? It'll Be Around Til at Least Friday

August 04, 2021
comment
Take a look at the fire and smoke map from the Environmental Protection Agency and you'll see that most of the western United States looks like something out of the apocalypse. But it's 2021 and on top of still being in the midst of a global pandemic, the entire West is in extreme drought, and mired in a growing climate change crisis... so really, what did we expect?

On Tuesday, smoke began to roll in to Central Oregon, where people have, for the last several weeks, been relieved to enjoy relatively clear skies in spite of the many fires burning around the region. Bend's air quality index sat at 171 as of this writing—rated "Unhealthy" for anyone doing anything outside.

On Wednesday morning, the Oregon Department of Environmental Quality issued an air quality advisory for Southern, Central and Northeastern Oregon due to the smoke from fires in both Oregon and Northern California. Images from the EPA show smoke layers coming largely from the fires south of Bend and Central Oregon. The Bootleg Fire, listed at 413,765 acres, is the largest fire in Oregon at the moment and was 84% contained as of Wednesday, according to Inciweb.


Bend's air quality index sat at 171 as of Wednesday—rated "Unhealthy" for anyone doing anything outside. tweet this

The Oregon DEQ said Wednesday that it expected the air quality advisory for Central Oregon to last until Friday morning. Resources to check on smoke levels include the Oregon Smoke Information Blog, DEQ’s Air Quality Index, or the free OregonAIR app for smartphones. 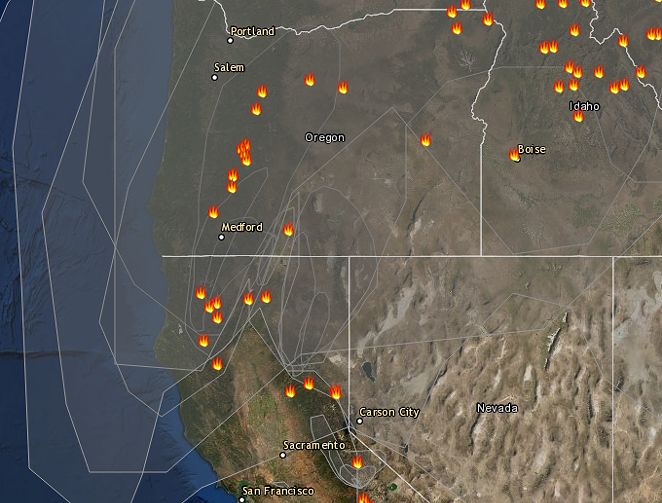