That Time I Lived on the Open Streets Route

Open Streets event draws a crowd -- but is a car-free commute realistic for most of Bend? 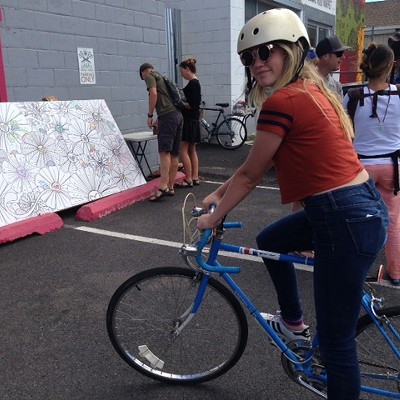 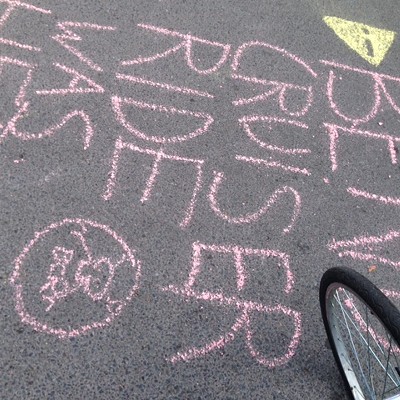 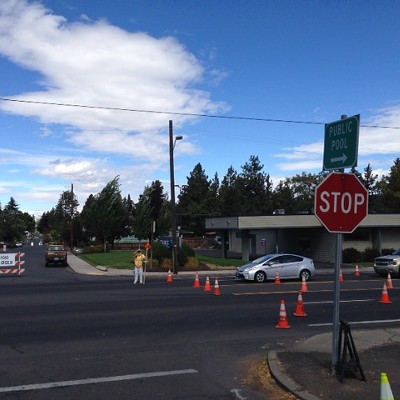 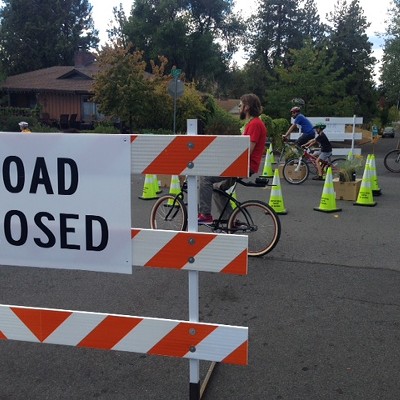 It was 11 am on Sunday when sign crews arrived to put up a road block near my house, announcing that Bend's 6th Street would be closed for the following four or five hours. By 11:01 am a driver reached that barrier and was promptly told to turn around. To the driver's dismay, there was no "sneaking" through. Less than an hour from then, that stretch of 6th Street—along with parts of Hawthorne Avenue, 1st Street and NE Olney Avenue—were expected to stream with walkers, bicyclists, wheelchair riders and other carless denizens. And so they did.

The "Open Streets" event was a first for Bend, but it's not new in other parts of the country. The nationwide Open Streets movement is aimed at temporarily closing streets "so that people may use them for walking, bicycling, dancing, playing, and socializing," according to the Bend Open Streets website. According to Jeff Monson, executive director of Commute Options—the driving force behind the event—an estimated 3,000 people attended this year's inaugural event. Social groups, musicians, local businesses and groups such as Bike Bend, Bend Park & Recreation District and the St. Charles Health System set up booths and demonstrations along the route.

Open Streets was well-attended, but an event like this does beg the question: Is getting around by bus, bike or foot really realistic for the average person who needs to get somewhere in a timely fashion? And if not, what are the barriers to making that a reality?

The first step, then, was to do a little test. On a normal day in fine weather, the bike ride from 6th Avenue to the Source Weekly's office takes exactly 10 minutes. Driving, meanwhile, takes six minutes, plus three or four more minutes to find parking.

Unfortunately, those two options are not necessarily realistic for many of the wheelchair bound, the elderly, or the infirm. Other options include the Cascades East Transit bus system and going overland. I explored each of the options last Friday morning, starting with the bus. I left home off 6th Street at 8:41 am. Walking to the stop, I missed the first bus I aimed for. I caught another one leaving 6th and Greenwood at 9:23 am, arriving at Hawthorne Station at 9:26 am. It was a nearly 20-minute wait before the next bus headed into downtown at 9:45 am. I arrived at work at 9:53 am. On the way home I walked; 26 minutes door to door.

Still, where does that leave people who don't bike or walk? I asked some people in the know.

Rides for the Elderly

Courtney Van Fossan, the newest board member at Commute Options, is in the midst of opening a Cycling Without Age chapter in Bend. Founded in 2012 in Denmark, Cycling Without Age's mission is to help the elderly get back on bicycles by offering free rides on "trishaws"—pedal-powered vehicles similar to rickshaws.

"The distances that we're traveling are really not very far. I think that so many people who can't ride or walk, they get left out of stuff like this," says Van Fossan. "What we're starting here, it's going to fill in the gap here and there to give people more connection to their community."

Getting Around via Wheelchair

Carly Mullar is an area resident who uses a wheelchair. She and her boyfriend Darrick Yarbrough, who modified a delivery bike to accommodate Mullar's chair, get creative, using a mix of walking, cycling, and sometimes, a car.

"Bend is better than it was for sure but it still needs some improvement because streets are so narrow," says Yarbrough. "Some of the sidewalks definitely need some work, especially the dang tree roots, and a lot of the streets are too narrow to have sidewalks or bike lanes...these are still really old style."

...And Back to Bikes

The commute might be relatively short, but the number of people commuting via bike sits at around two percent in our area, says Lucas Freeman, executive director of Bend Bikes, a nonprofit promoting bike commuting in Bend. One problem, Freeman says, is people's perceptions about safety.

"Eight inches of a stripe for a bike lane... people don't suspend their disbelief enough that "I'm safe," says Freeman. Bend Bikes supports setting up a network of neighborhood "greenways" around the city, where bikes are encouraged and cars discouraged. While ridership numbers are low now, Freeman posits that offering these options would increase ridership.

"Is it naïve to say if you build it they will come? Maybe," Freeman says. "You can start small. You can do demonstration projects. Look at what the ridership numbers do and that will prove it to you. Admittedly it takes more money, but it's nowhere near what it would take if you wanted to expand that road capacity for cars."