The Acolytes of Mr. Anderson

Teachers, professors and even the host of Oregon Field Guide weigh in on Jim Anderson's influence on their lives

Readers of Jim Anderson's Natural World column over the years will remember some familiar themes: Talking about rolling into Bend on his Harley-Davidson, advocating against outdoor cats and feeding deer in town, and introducing Central Oregonians to creatures as bizarre as the Jerusalem Cricket or as mundane as the common field mouse. 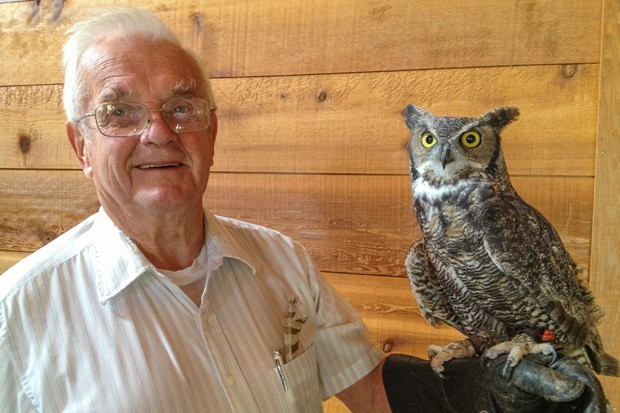 But among those most attuned to his legacy and storytelling are the people featured here, who I interviewed recently about their relationship with Anderson. These are just a few of the people who have known Anderson, now age 92—some since the days of the fabled Harley-Davidson.

"My knowledge of Jim goes way back. We spent many weeks at a time with them every summer. We looked forward to it every year. We went to butterfly counts.


"Jim took us birding all the time, and we got to ride on the roof of their old Chevy driving around.

"When I went off to college, I already had cultivated a deep love of deserts and natural history because of Jim, so I knew I wanted to be a biology major.

"I ended up pursuing a project that took me to do substantial amounts of field work in the West, in the Great Basin in Utah and Nevada, northwestern Nevada—just across the Oregon-Nevada border, working on the interplay of rodents and raptors and how predation and owl pellets generate fossil records that then can get preserved for thousands, if not millions of years.

"At that time, it was great. Jim and Sue (Anderson) came out and they were my field assistants when I was doing some of my dissertation fieldwork. They were just both a constant source of both information and support. I could call them up whenever I needed them for advice—personal or professional. Jim used to joke with me that if I ever broke down anywhere, he'd come get me. So the Anderson towing service was a big joke. But you know, I'm now an associate professor at Oregon State and I've had a variety of car trouble on the east side of the Cascades, and I still call Jim whenever I get my car fixed and get his advice on what to do.

"In the end I ended up dedicating my dissertation to him because he was just such a big part of the inspiration and motivation for me pursuing graduate school in the first place."

"I came to Oregon Field Guide 20 years ago. I was introduced to Jim from a former producer of the show. As you kind of get the lay of the land, people said, 'you have to meet Jim.' We call him 'Raptor Man.' And we were friends from the start—uncommon for a source, you know, for a story. He's just a really welcoming personality and he wants to teach the world everything he knows.

"My favorite story with him was about turkey vultures, which is a bird that I think most people don't particularly have an attraction to. They're gross, and they're scavengers. Jim made turkey vultures the most interesting bird you'll ever find. The funniest moment I think was when we went out, trying to attract turkey vultures to look at them up close. We nailed dead salmon to a fence post, and as we're doing it, it's spraying fish guts everywhere. Just awful, and it's hot and it's just the worst, and Jim was just laughing and enjoying this moment thinking this is the best thing in the world.

"There are a few people I feel as strongly about and think more highly of in conservation in Oregon—and I mean in all of Oregon, in my personal life and my professional. That might sound like bullshit, but it's absolutely not. This is a rare guy. I brought my family to see him because he touched me in a certain way. I just want my daughters to see him, to know who this guy is, because he's a legend."

Editor's note: Jahn and Oregon Field Guide featured Anderson a number of times—including a story focused all on Anderson. Jahn helped us track down that episode.

"I met Jim through another teacher who had worked with him years ago at OMSI. I invited them to give a slide presentation about birds, and then he took us on this field trip to see a golden eagle nest, and it was fabulous. And that's when I first got entranced with Jim and his vast knowledge of Central Oregon. I recognized right away that it's a rare person that knows as much as he does about where we live. So I wanted to grab whatever opportunity I could to get him in my classroom or be on a field trip with them.

"I don't know if you've heard of a thing called the drifting baseline idea. It's the idea that our baseline of where we think things should be, going back to pristine times, our baseline. 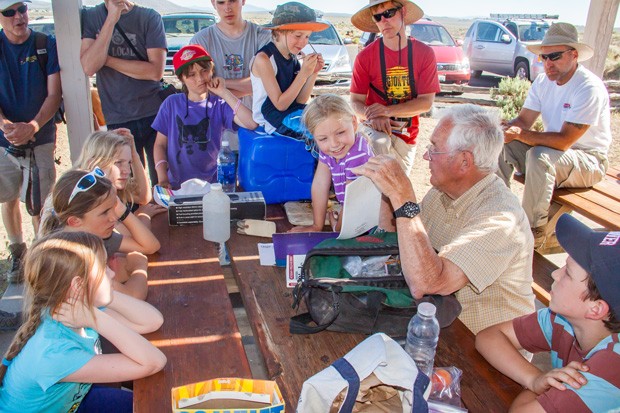 "Our brains shift over time, like what you and I might think of as going back to a natural state might be really different from somebody that's been around here longer. And so, I think every place needs someone that's been here a long time so that they can get that perspective of what has really changed.

"We're kind of in danger of losing that baseline as time goes on, and so I think Jim's a good beacon of that. What I really appreciate about him is he's willing to take a stand, and just the fact that he's been here for so long. He came here in his 20s and he's now 92. There are 92-year-olds around, but they're not speaking up, necessarily, and then there's the ones that are speaking about speaking up but they may have moved around a lot. But he's been here for 70 years."

"I moved to Central Oregon in the 1970s, and I've always been as interested in natural history. And somebody said, 'oh, you've got to meet Jim Anderson.' One Sunday I got this phone call, and he says, 'I am Jim Anderson. We need to get together.' I said, 'yeah.' I said 'why don't we go out tonight and look for some great horned owls?' And so, my wife and I, we went out with him and we went out east of Bend somewhere.

"At that time, I can't even remember where it was, but we looked around for a while. He stops somewhere and says, 'I'll get out here, and just call,' and he got out and did the best great horned owl hoot imitation that I've ever heard.

"So we got a house out east of town. Jim said, 'I'm going to bring you a housewarming present,' and he showed up with a fairly large nest box. And he said, this is for kestrels—sparrowhawks is what they used to call them. He looked around our yard. He said, 'Put it up on that tree at this spot and he said 'it'll be probably four or five years before somebody gets into it. But when the kestrels nest, call me on May 15, and I'll come out and we'll band them.'

"First year, nothing, and second year, nothing. Third year, nothing. Fifth year the kestrels come in, and we call him on May 15. He came over and there were four kestrel chicks there. We banded them. He was right on schedule with his five-year projection."

"I've never really met anybody who has a greater joy for life than he does. My band played a surprise birthday party for him a couple years ago. Just the tremendous love for his family that he has is really the thing that is most striking to me.

"He's got such a strong personality in his work and can't leave himself out of it. I don't mean that in a negative or narcissistic kind of way at all. He's just immersed in whatever it is that he's writing and he can't extract himself from the work and be a dispassionate objective observer. That's not who he is.

"He absolutely loved and admired all the people that taught him and gave him a leg up in the world and he's using his 'last call' to celebrate them, which is very gentle, and very cool."

Editor's note: Cornelius is referring to Anderson's farewell column printed in this issue, and to be printed in The Nugget, as well.

Jim Anderson pens his farewell column to readers of the Source.