The Aerodynamics of Youth

Brrmmmm... the sound of the engine roars to life as the small plane rumbles down the runway and ascends quickly into the sky. On board the 1971 Grumman Yankee AA-1A is longtime veteran pilot Kim Muinch and his fearless passenger, 16-year-old Lucas Tracy, a junior at Ridgeview High School in Redmond. Just a few miles away, 17-year-old Sisters High School senior Mary Root is completing her preflight checklist before taking the helm of a single-engine Cessna 120 tailwheel light aircraft.

Lucas and Mary are not like other students their age. While the closest most teenagers get to a cockpit is via online video games, these two teens are part of the thriving youth aviation scene here in Central Oregon. 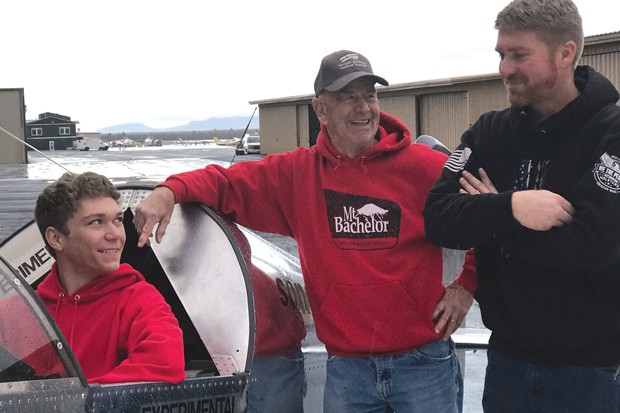 Founded in 1992, the Young Eagles is the only program of its kind that offers kids ages 8–17 an opportunity to fly with an experienced pilot, free of charge. To date, they have flown over two million kids nationwide.

"This is a unique sort of world," says Dale Anderson, President of EAA Chapter 1345 in Bend. "The look on their faces when they step out of the airplane after they've flown - it's just an amazing experience."

The program is operated entirely by EAA volunteers and member pilots, who bring their own planes to the airfield and generously share their time to fly Young Eagles. Chapter 1345, the "High Desert Flyers," hosts about a dozen licensed pilots with small planes suitable to fly children on their initial "discovery flights." 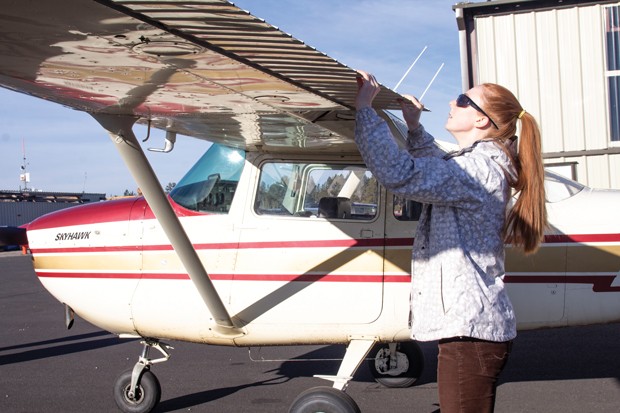 "To me being able to fly just seems like a very rare opportunity and it really is, especially around here, but Kim was very adamant about getting me flying and letting me take the wheels," says Tracy, who is part of the Young Eagles. "The whole way to the airport I was excited because I knew I was going to get to fly."

The length of each discovery flight is weather dependent, but usually lasts around 15 to 20 minutes. Prior to takeoff, pilots describe the skills involved in flying, review aeronautical charts, demonstrate how to operate the instrument panel and complete a careful "walk-around" preflight inspection of the airplane.

"The flight itself was simple but informative," Tracy explains. "You see all the buttons, all the lights flashing, and it really can be overwhelming, but once you have someone actually show you what they all do, it becomes much simpler and that was invaluable really."

A projected 763,000 new pilots will be needed in the world by 2039, but the number of pilot certificates issued by the FAA has decreased more than 60% since 1980.—Aircraft Owners and Pilots Association tweet this

After their flight, every Young Eagle is automatically eligible to become a student member of the EAA, which includes a subscription to Sport Aviation, access to the web-based ground school, free admission to 400+ science and technology museums, as well as opportunities to obtain scholarships and flight assistance if they wish to continue their pursuit of aviation more seriously.

"Joining the EAA and finding out about the Young Eagles program has opened up so many doors," explains Lucas's proud father, Taylor Tracy, "Lucas, at 16 years of age, has decided that what he is going to do is become a commercial pilot. As a parent, I feel blessed to have found these people. They have lit a fire under my son like I have never seen and given him a goal and a future that he had never even considered being a plausible option."

Operating out of the Robertson Hanger at the Bend Airport, Chapter 1345 brings together a diverse group of aviation enthusiasts, aircraft builders and pilots who share a passion for inspiring youth in the wonderful world of flight.

In Sisters, teenager Mary Root shares a similar goal. She is a member of Outlaw Aviation, an experiential flight science internship program dedicated to empowering future pilots. As the only program of its kind, Outlaw offers teenagers in Central Oregon an unparalleled chance to launch a professional career in aviation while still enrolled in high school. 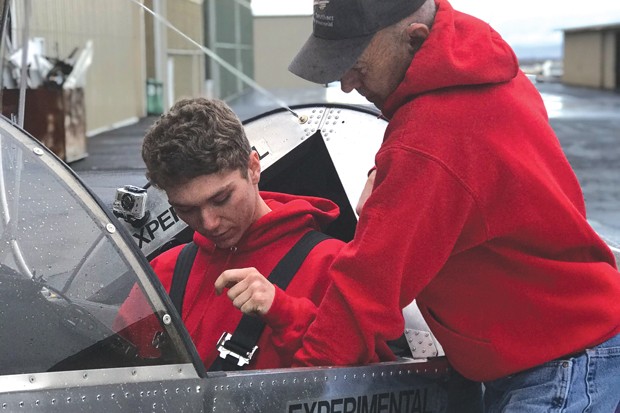 "I just knew coming in that this was an opportunity that wasn't offered to everyone, and I wanted to take full advantage," says Root, who earned a national Naval Reserves Officer Training Corps college scholarship and plans to serve in the military as an aviator after high school. "It's something I always knew I wanted to do and I'm so grateful for the opportunity to pursue it now and not have to wait five, 10 years until I get my license or start thinking about that kind of career."

Outlaw was founded in 2014 by local airport owners Julie and Benny Benson, who had a high school-aged daughter interested in aviation. With just a single small plane, a dedicated mentor and a few excited kids, they launched a pilot training program to serve the area's local youth.

A few years later, in 2017, chief flight instructor Sam Monte and his partner Walt Lasecki, both veteran military officers, took the reins. They loved the idea of a practical, skills-based aviation career internship program geared toward high school kids. Since expanding the program and purchasing additional planes, they now work with about 25 students each year, with approximately 10 students actively flying the skies in 2020.

"I remember growing up in high school and we had places like skill centers, mechanics, all those hands-on type things," says Monte. "I actually do think that high schoolers need something more hands-on, and flying an airplane is just that."

In that aim, they offer comprehensive internships to Sisters High School flight science aviation students. During their first semester, students gain a foundational understanding of all aspects of flight. They explore career paths, review the history of aviation and learn basic aerodynamics, meteorology and physics, in addition to the proper operation of airplane instruments, aviation charts, navigation, weight and balance and the prediction of airplane performance. 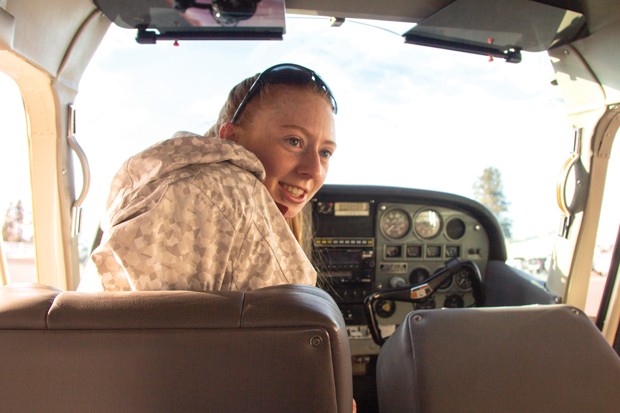 Next, SHS aviation students spend a solid year attending comprehensive private pilot ground school at Outlaw Aviation. Their internship focuses on the nitty-gritty, hands-on work involved in aviation, starting with the proper maintenance and cleaning of aircraft. After getting their hands dirty, internship students learn the ins and outs of cross-country flight planning, from calculating fuel times to utilizing computer sectionals to navigating destination checkpoints.

Before they take the controls, however, they must first spend time on the ground in their on-site flight simulator. When deemed ready, students get the chance to operate a Cessna 120, Cessna 172 or Mooney M20C small aircraft with their flight instructor as the co-pilot.

Students aspiring to get their private pilot license will experience 20 hours of this dual training, 10 hours of further skill refinement, and a final 10 hours flying solo, for a total of 40 practice hours. It's a bit like getting a driver's license, only 6,000 feet above the ground.

Root hasn't flown solo yet but is looking forward to that special day. "I know that when I am ready to fly solo I'll be told by my instructors, and I'll know that I have all the skills necessary," says Mary.

Finally, their rigorous final exam involves taking the FAA private pilot knowledge test, which qualifies them to continue on their journey of becoming pilots—if they pass, of course.

It's a lot of time, effort and work to get their pilot license, but this initial investment can pay off in the long run. According to the Aircraft Owners and Pilots Association, a projected 763,000 new pilots will be needed in the world by 2039, based on Boeing's Pilot and Technician Outlook—but the number of pilot certificates issued by the FAA has decreased more than 60% since 1980. This mismatch of supply and demand presents a fantastic opportunity for high schoolers interested in high-paying, aviation-related careers down the road.

"I think this program gives me so much more than an opportunity for a career outside of high school and outside of finishing my private [license]," Mary says. "It definitely gives me a new sense of identity and a new activity that no one has. It also gives me an insight about my true character, I think, because a lot of aviation is overcoming, not necessarily failures, but just hard lessons. And that really provides me insight about what to do when I'm faced with a challenge."