The Altar of Pizza

Between the bright, vaulted white ceilings of the restored 1912 church and the creamy, caramelized discs of wet mozzarella on the pies, it's tough to say whether the atmosphere or the food is more of the attraction at Grace and Hammer Pizzeria, tucked along SW Cascade Avenue in Redmond. 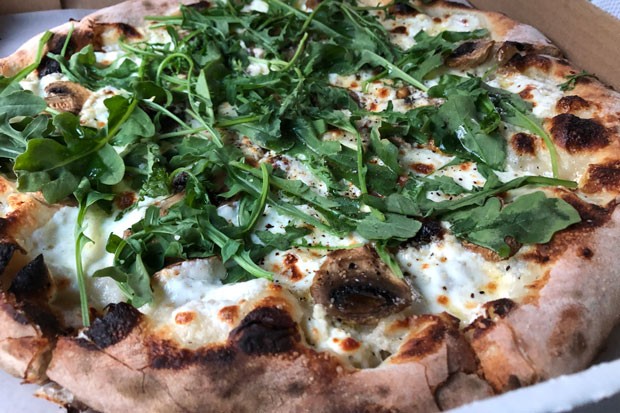 But for Owner-Manager Pio Valensin, the wood-fired oven located in the former chancel area of the building is definitely the star of the show. Pizza is, after all, the main offering, made with cold-fermented dough, cooked to crispy perfection at 900 degrees in the oven. Delicate, sweet red sauce made with just tomatoes, salt and garlic—or smooth, buttery Bechamel, or "white sauce," go on top of that. And logs of mozzarella in brine, brought in from New Jersey, top each pie.

"We like the way it melts on the pie. It gives it some caramelization," said Valensin of the cheese, clearly showing off his love of a well-crafted pizza. On my visit, I sampled both the Saint Stanley, featuring red sauce, pepperoni, Italian sausage, caramelized onions and fresh—not dried—Calabrian chilis, as well as the Propriety, with goat feta, oyster mushrooms and baby arugula. Both were impressive, with crispy, slightly charred crust and delightful toppings.

And while the pizza menu will have me coming back for more, Grace and Hammer is also oozing with atmosphere. Its owners revamped the historic church in early 2019, brightening it up with a fresh coat of white paint, but also adding in touches of its former life as First Presbyterian Church of Redmond, used for that purpose until 1979. Photos of past weddings and other events are hung in the entryway, bringing in some cute—and historically authentic—ambience. Valensin told the Source that the photos are a community-generated project: Past parishioners and Redmond locals have brought their old photos from the church to add to the space. And every Friday evening, the staff rings the church bell, inviting Redmond to come to dinner.

"The community is so welcoming, and is so community-forward," Valensin said. It's a stark contrast, in many ways, to the bustling (and sweltering) metropolis of Austin, Texas, where Valensin, Chef Adam Valentine, Bar Manager Anthony Leal and company founders Chad and Cinnamon Nemec operated a pizza place before opening Grace and Hammer. After selling their business in Austin in 2017, the prospect of restoring First Presbyterian into a restaurant was too tempting of a prospect to pass up—so the entire crew headed north to Redmond. Valensin, for one, enjoys making pizzas in the drier, cooler air of Oregon, compared to the deep humidity of Texas, he said. 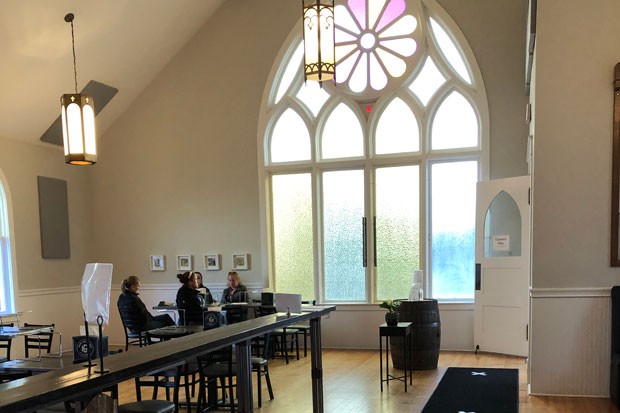 While the shutdowns that came with novel coronavirus have affected Grace and Hammer's business in the same way they affected every other food service establishment, the crew is beginning to grow a following in their first full summer in business. Since wood-fired pizzas are best consumed within about 10 minutes of coming out of the oven, Valensin said, thus far there's no delivery—just takeout or the option to hang out in this beautiful space. A menu of specialty cocktails, such as the Three-Fingered Jack, a cross between a Manhattan and an Old Fashioned, made with Maker's Mark Bourbon, tart Oregon cherries and a house-made honey syrup—or the Monkey Face Margarita, made with a scratch margarita mix, invite patrons to come sit and sip a while. A welcoming patio makes that even easier. And ongoing additions to the menu, such as sandwich specials, mean there's often something new to try.

"We are constantly experimenting," Valensin said. In the end, though, the focus is on the pies, made at the altar of pizza. "Our goal is to make honest pizza."