Kaki King blends audio and visual through projection mapping on a guitar, giving new life to the instrument 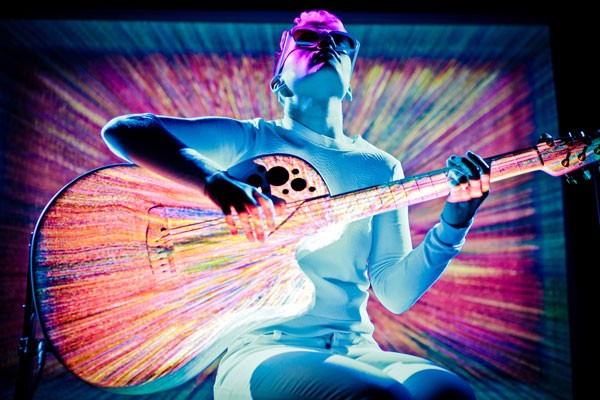 What leads someone to choose a specific instrument? For Kaki King, she doesn't feel like she had a choice in the matter. The guitar chose her. In her current show, the guitar also has a chance to speak for itself.

To get angry. To explode. To speak—all thanks to King and the character she plays onstage, as well as the technique of projection mapping.

"I think it's happenstance, honestly, that the guitar became the thing I do as a career," King says. "I started young. I wasn't a prodigy, but I could get through what I was given. I stopped taking lessons at 5 or 6 and started playing with my dad. I knew how it worked, how it functioned."

Around age 9, King picked up the bass, which she considers a "gateway drug" to other instruments, including the drums. The guitar became something she did privately. Touring in bands, playing bass and drums, is what she did professionally. After the 9/11 tragedy, she found herself playing guitar in the subway, which led her to making an album and getting signed.

Not only did the guitar choose her, but the instrument eventually found her on "Rolling Stone" magazine's list of "Guitar Gods" in 2006 — the only female, and the youngest artist on the list.

For the past four years, King has blended audio and visual in a engaging show titled, "The Neck is a Bridge to the Body." The show features her in all white sitting and playing a stationary white guitar. Using the technique of projection mapping, a process that projects video onto an irregularly shaped surface—in this case, her guitar.

"The show has had a second life in that we started off touring in the same places I used to tour — rock clubs, jazz clubs and small places like that," King says. "It really wasn't the best setting. Halfway through I changed management. We started putting it in theaters, which changed how the audience reacted, how I played, very subtle things changed, and that's where all of that started to blossom."

For each show, she focuses on refining the character she plays while she's "in the neck." She plays every show in a different way, keeping it fresh and further allowing the guitar to speak on different levels.

"Projection mapping on the guitar is really awesome and beautiful, simply put," King says. "Once it was tested, I knew I had a show. All of my career I've been trying to fuse the guitar with something that hasn't been seen, something new. This allowed me to do just that and expand it times a thousand. I have a visual language. It can talk, it can get angry, it can explode into bits and pieces."

For most artists, there's always another album, another tour on the horizon. For King, she doesn't really have a plan for what's next—and she's totally fine with that.

"This show deserves as much a tangential life as possible," King believes. "It scratches the surface of what's possible when all of the elements are there. At least I'll be able to be there and get on stage and tell a story in a way that hopefully hasn't been done before. There are so many places to go, I'm really OK being in that limbo."