The Artist Behind the Mural | Local News | Bend | The Source Weekly - Bend, Oregon

The Artist Behind the Mural

The BCD's Franklin Avenue underpass project serves as a signal of hope; a bridge between two parts of Bend

Kaycee Anseth has worked as an artist in Bend since she moved to the city 15 years ago. In that time, she's contributed her time and talent to the city's growing artistic community: The Franklin Avenue underpass mural, located in the Bend Central District, is just one of many places to see her work. Dozens of galleries and stores have exhibited her work and she's painted commissioned murals throughout the city. As Bend grows more expensive—and those with creative careers struggle to stay afloat—Anseth has managed to thrive both inside and outside the lines of conventional culture. 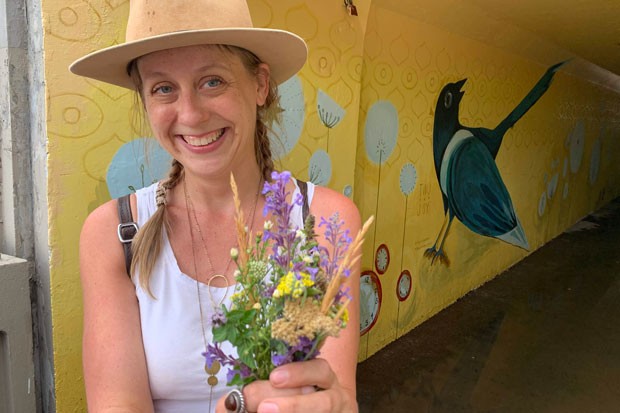 Anseth's work pushes the boundaries of traditional mediums. Instead of paint, she mostly uses tiny pieces of paper cut magazines once destined for the recycling bin. In a society where many consumer goods are designed to break and end up in the landfill, her reuse of discarded materials calls into question the norms of throw-away culture.

Anseth glues colorful strips into dreamy collages that evoke fairy tales and distant memories and a childlike reverie about foxes and wolves; for a time when small patches of forest and field held magic and mystery.

"She is mainly interested in the non-human world," said Cathasach Ó Corcráin, Anseth's husband. "She's painting animals as saints; it comes from an animistic point of view. The natural world is a subject rather than the object. There's a story in her work... it's driven by mythology."

While Anseth's primary medium is collages, she's also been commissioned to paint murals for the Tin Pan Theater, Lone Pine Coffee Roasters and the Old Mill District. Last year, she finished "Two For Joy," a mural on the inside of the Franklin Avenue underpass, featured on the cover of the Source this week. She's been featured on the cover of the Source five other times, from 2008 through 2015.

As Ó Corcráin tells it, Anseth overcame a number of hurdles in order to finish painting the mural in the underpass. Anseth is a member of the Bend Central District Visionary Board, a group organized by Moey Newbold of Central Oregon LandWatch, working to promote sustainable infill development in the industrial blocks east of the train tracks. The board envisioned a neighborhood brought to life by public art, and sought to "get the red tape out of the way for artists to paint murals in Bend," Ó Corcráin explained. "The code affects the whole city."

The Bend City Council passed a new mural code last year that eased the process for private buildings, but not for public places and right-of-ways.

"There's no reason Bend shouldn't have art in public places," Ó Corcráin said. "It's happened in big cities before, when they get support for art in public places, the incidence of graffiti goes down. There should be a process where if there is a location where art could go, the artist could go through the process, and it would be supported."

The City first told her that she must get permission from BNSF Railroad, because the City had no jurisdiction over the underpass. She got the go-ahead from BNSF and began the mural. That's when the City called her to tell her they would fine her $700 if she continued to paint it. The City eventually conceded that because the property was owned by the railroad (technically federal property, and therefore public) they had no jurisdiction over the underpass, Ó Corcráin said.

"When there is art, places feel loved and cared for, not just an industrial waste land," Ó Corcráin said. "In the Maker's District [inside the BCD], there is no reason there can't be an artistic vibrant intensity in the town. It can make the town glow."

Anseth has been working with the BCD Visionary Board and Bend's Creative Laureate Jason Graham to plan a second mural on the other side of the Franklin Avenue underpass, but this time, the group wants to work with high school students.

Meanwhile, Anseth has been living with cancer for over three years, and is now under hospice care. As she's struggled with the illness, she's documented her journey on Instagram and remains committed to her art. Finishing the mural became more than an art project, but a symbol of hope for other artists. It was about possibility rather than settling for the status quo, as well as a bridge between two parts of town.

Her success in the face of ambivalence and bureaucracy could also be seen as a symbol for a Bend at the crossroads. Will the reinvigoration of the BCD create a welcoming habitat for artists, or will it turn into a neighborhood of high-end condos built for investors?

Anseth plans to make all of her work available for print at kayceeansethcreations.com. All the profits will support local artists.

"She wants to be an angel investor," Ó Corcráin said. "To leave a legacy that supports other artists in the community."