The Bad, the Worse and the Deadly | Film | Bend | The Source Weekly - Bend, Oregon

The Bad, the Worse and the Deadly

"Sicario: Day of the Soldado" will blow you away 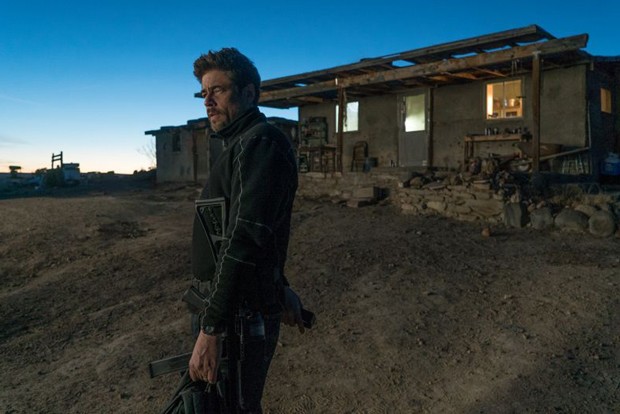 When the announcement of a sequel to 2015's sleeper hit "Sicario" landed last year, the controversy around the screenwriter ditching the lead female character completely overshadowed the novelty that movies for adults could actually make enough money to warrant a follow-up.

Upon the release of "Sicario: Day of the Soldado," the controversy shifted and became about an ill-timed opening during a moment in which the country is politically divided about immigration, border walls and space forces. Some of the more liberal papers accused "Soldado" of being Trumpkin propaganda that would give conservative outlets even more talking points about sealing borders and celebrating American isolationism.

Sadly, anyone too far left or right probably won't give the film the chance it deserves, especially since all of the controversy is manufactured and categorically untrue. "Sicario: Day of the Soldado" focuses on Josh Brolin's shadowy government operator and Benicio Del Toro's vengeance-seeking freelance assassin, leaving behind Emily Blunt's hard-edged optimism for an apolitical amorality.

The entire arc of the first film focuses on Blunt's rapid disillusionment of America, as she watches Brolin and Del Toro twist the law into whatever they need it to be to achieve the death and destruction of the Mexican drug cartels. Brolin and Del Toro had incomplete arcs, so their inclusion in "Soldado" makes sense. The film feels like the middle chapter in a much larger story about male aggression, political corruption and the tenuous relationship between the U.S. and its southern neighbor.

"Soldado" is advertised as moving its focus from the cartels to terrorism, but that's really only an excuse for writer Taylor Sheridan to hypothesize about how the U.S. government would act if it could classify the cartels as a terrorist organization. If the film takes any political stance, it's that dead Americans cost politicians votes, so they'll break whatever law they have to in order to stay in office. This isn't propaganda or some thinly veiled exercise in fluffing fascist ideals. Instead, it's a commentary on the complete lack of morality of men trying to act like the protectors of freedom.

While "Soldado" is missing the elegance of original director Denis Villeneuve and the stunning cinematography of Roger Deakins, there's an immediacy to the sequel that keeps the entire film a spellbinding masterclass in tension and suspense. The film is brutally violent, but always in service to the question of whether wolves will always bite or whether they can learn to protect the sheep.

There's no glamorization of Trump's wall or American exceptionalism or even the violence these men and women commit in the name of "freedom." If anything, "Soldado" makes a case for Mexican cartels equaling U.S. foreign policy. There are several open ends as the film comes to a close, setting up an epic confrontation between the myriad of players that will make for a phenomenal third and final film. Head into "Soldado" with an open mind and you'll find a riveting thriller that builds on the original's themes while expanding into a nail biting and epic narrative.