The Barred Owls are Coming | The Source Weekly - Bend, Oregon

The Barred Owls are Coming

Then the warning was the feathered invader would compete with the spotted owls for prey and eat them out of house and home, which seems to be the case. In any event, the last I heard Wildlife Services — the arm of the U.S. Department of Agriculture that uses deadly force to solve wildlife problems — was assassinating owls in the Pacific Northwest.

Way back in the '80's one turned up in Alfalfa, and then about five years ago I found one spending some time in Tumalo State Park on the Deschutes, and another was seen near Crescent, then recently another was observed hanging around the Old Mill District in Bend. And now they're roaming around Sisters, Tumalo and the countryside in between.

Unlike the spotted owl who is a specialist and concentrates feeding on small boreal rodents in old growth forests for prey — with an occasional gopher or two for variety — its close cousin, the barred, will gobble up just about anything it can find, maybe even a chicken or two.

And, because they are close relatives, the fear they will mate with their cousins, the spotted owls, may be real, and produce some kind of half-breed that will eventually destroy the original Northern spotted owl as a species. It's almost for certain — as it is with many alien invaders, such as European starlings — they may eat their cousins out of house and home, literally.

What is for certain is that we humans have played a big role in allowing the barred owl to migrate from the East to the West. It's our logging practices that opened the gate. Clear-cutting became a way of life for the logging industry in the Northwest, and Canada enjoys that method of cutting trees as well. So we have created a forested freeway for the owls to travel from East to West.

Barred owls are mostly cavity nesters, which puts them in direct competition with our native screech, saw-whet and pygmy owls, and kestrels—plus a number of woodpeckers and song birds for breeding sites. And, the barred being the larger of the group, means it may win that battle as well. 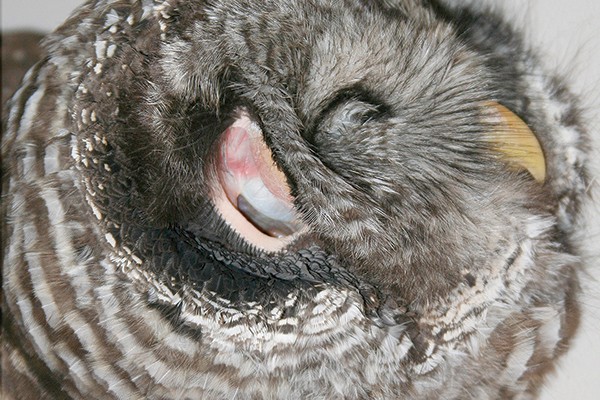 As far as I know, the barred owl is the ONLY owl that sings an eight-note call, which is unique. I have heard birders humanize the call to, "Who cooks for you, who cooks for all," with a drop in the tone on the last part. It's normally pretty noisy in spring — but — if a Great horned owl responds to the barred's call, it will shut down immediately and may even leave the country. Great horned owls are the chief predator of barred owls.

The photo of the barred owl's ear opening provided me the opportunity to show just why owls are so good at catching prey by sound alone. That huge ear-opening is capable of sensing a mouse tip-toeing through the tulips, and the fact that they are not situated like human ears — directly across from another, but offset — means they are super accurate at locating prey.

And speaking of prey, don't be surprised if you're out fly fishing and you come upon a Barred owl standing in the creek or edge of a lake. They will occasionally wade into water to gobble up a few spawning fish, pollywogs, frogs, salamanders or crayfish. Barred owls will even come to a campfire if it illuminates large insects, such as June bugs and the like.

If you ever find yourself back East in Brooklyn, New York, take a few minutes and visit the art museum. John James Audubon's original illustration of the Barred Owl stalking a gray squirrel — engraved and colored by Robert Havell's London workshop — is on display there.

Anyway, keep your eyes peeled for an owl about the size of our local great horned, but without any "horns." Don't be bashful about sending me an email if you see one; I promise, I won't shoot it or tell anyone from Wildlife Services where you live. And if it sings that eight-note song to you, consider yourself one of the Lucky Ones.