The Beer Giants of Ashland

To visitors, the town of Ashland, Ore., about 15 miles north of the California border along Interstate 5, is known for majestic mountains, quaint old architecture the Oregon Shakespeare Festival. Anyone who forgets about the beer scene down there, however, is missing out—because , two breweries have been pushing good beer (and good food) forward since the late '90s.

One of them is, of course, a familiar name to Bendites: Caldera Brewing, founded by Jim Mills in 1997, back when beer was still a nascent industry in the state. (It was not the first brewery in Ashland; that would be Rogue Ales, which opened in 1988 but moved to Newport the following year.)

First craft brewery in the West to can their beer? Caldera Brewing. tweet this

Caldera boasts a number of firsts in the scene; they were the first craft brewery in the West to can their products, and also the first commercial outfit to brew with "hop hash," an extremely potent hop-residue concentrate created as a byproduct of the hop palletization process. Said Hop Hash IPA remains a dank favorite in 22-ounce bottles, along with the more mainstream Hopportunity Knocks IPA and the cryptically-named Vas Deferens Ale, a Belgian-style dark beer.

The brewery retains its old brewpub location off Main Street in the heart of Ashland, but visitors will definitely want to prioritize the new Caldera Brewery & Restaurant, a large, wide-open space off I-5, offering incredible mountain views from the outdoor porch. The indoors are a feast for the eyes of a different sort—a dizzying 45 different Caldera beers are on tap, and the walls are lined with Jim Mills' personal collection of over 5,000 beer bottles and cans, purportedly the largest in Oregon. 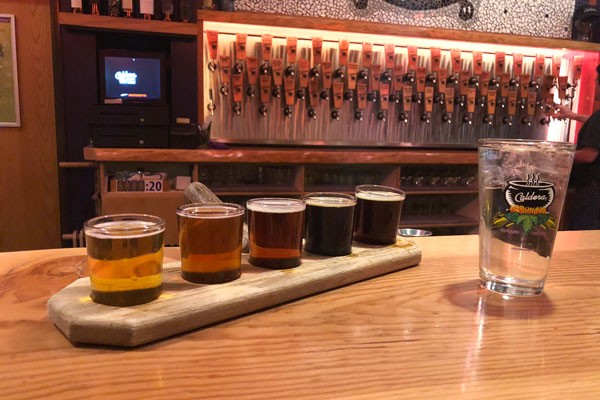 Thai chicken curry and barley wine shouldn't work together, but they do, and it's pretty epic. tweet this

Ashland's other beer giant, meanwhile, occupies a much smaller footprint downtown. Standing Stone Brewing opened in 1996, inside a 1920s-era garage building on the National Register of Historic Places, quietly building a reputation for great beer, great food sustainability. The inside has a dark, intimate feel, evoking a time when Ashland was an industrial hub in southern Oregon.

None of Standing Stone's beers scream out at you, but all of them—from the Twin Plunge double IPA and Irish-style stout to the 2017 edition of their winter —are perfect examples of their respective genres. It's all complemented beautifully by the food options, much of them made with ingredients from Standing Stone's own One Mile Farm, so named since it's a mile away from the brewery. Thai chicken curry and shouldn't work together, but they do, and it's pretty epic.