The Bend Ale Trail Relaunches, with More than Just Breweries

After more than a decade, Visit Bend incentivizes getting your drink on

It seems difficult to fathom nowadays, what with nearly 30 breweries in Central Oregon today, but when the Bend Ale Trail launched in 2010, it would've required the six-fingered man to count all the stops on the nascent hop-hike. That was an era without Sunriver or GoodLife or Crux; an era when almost everyone offered an amber ale and brewers would've been aghast if their IPAs came out hazy. Times, like beer styles, have changed.

Visit Bend realized its famed Bend Ale Trail—among the first of its kind, which is also hard to fathom given that everywhere from Ohio to Oklahoma boasts them now—was due for a refresh. 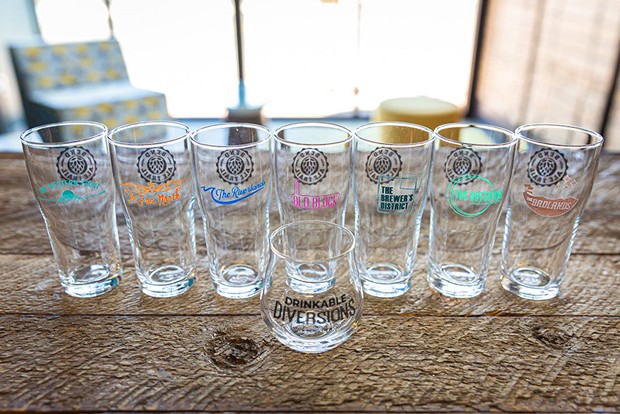 The new Bend Ale Trail launched July 1 and garnered over 5,000 unique users in its first month. The revamped beer byway is no longer monolithic but heptagonal; it's divvied into seven distinct territories around the greater Bend area. They are the Old Block (home to the Deschutes pub and BBC), the Western Front (including the Galveston pubs such as Boss Rambler) the Riverlands (sip riverside Belgian ales at Monkless), the Badlands (note: westsiders don't need actual passports to visit Bevel or Spider City breweries), the Brewer's District (Craft Kitchen didn't close; it just moved out of the current Monkless space), the Far North (for the five Redmond beer makers), and the Outer Rim (Sunriver, Sisters and Prineville).

"Seeing how much things have changed since those initial six is the reason we rebranded," said Visit Bend's Tawna Fenske. "It's about getting people out there to try the new places."

For example, in a world where Northwest hoppy IPAs reign, Porter Brewing, established in 2018, keeps English-style "real ales" alive with cask-conditioned ales. That same year, Spider City hatched as a breeding ground for global styles from Polish-style wheat beers to Belgian grisettes to Bamberg-style smoked beers (though with an Oregon twist by using cherrywood smoked malts).

The newest, Bevel, had its first anniversary stymied by the pandemic, but co-owner Valarie Doss is stoked to be part of the trail.

"Because our brewery is off the beaten path, we knew that being on the Bend Ale Trail would drive new customers," she said. It doesn't hurt that the disc golf-themed brewery's tasting room doubles as a food truck pod.

New breweries have to wait a year before being added (not that any breweries are about to open in Bend—for a change), and they need to have a dedicated tasting room open to the public with broad hours.

And there are undoubtedly beer pilgrims who are completionists. "We thought we had time to get these done," said Visit Bend's Laurel Hunt of the custom wooden trays that anyone who checks into every spot on the ale trail receives. "We already have a list of people we need to mail them to," she added. But, unlike the original version where ale-trailers had to check in to every brewery to receive one Silipint, now those who tackle everything in an individual territory receive a four-ounce taster glass with its respective art. The wooden trays are outfitted to hold all eight tasters. 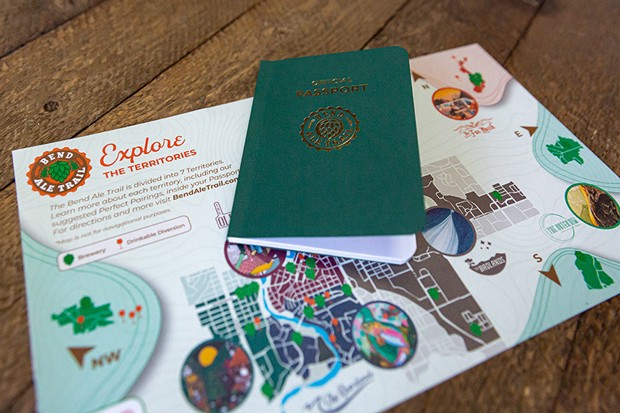 Eight taster glasses when there are "only" seven brewery territories? Yup. The refreshed trail includes a section for "drinkable diversions" to share the spotlight with Bend's cideries, wineries, distilleries, and, uh, kombucheries. From Avid Cider to Va Piano Vineyards, there are 16 destinations, but one need only collect seven stamps from them to complete the "diversions."

Bend Ale Trail Month, held in November, was canceled for 2020 but will return this year. Everyone who tackles the entire trail in that one month will receive an additional keepsake. It won't be a trophy going forward, but Visit Bend will land on something. "People love getting a thing," said Hunt.

The event isn't held in November for no reason: the entire concept was initiated to bring visitors in during the shoulder seasons. Good luck even finding a bar stool at a brewery now, but before Mt. Bachelor brings in the pow people, tasting rooms provide plenty of elbow room. In fact, the B.A.T. was conceived by Visit Bend's CMO while riding up a chairlift brainstorming about how to fill those spaces throughout the year. A 64-page B.A.T. passport can be purchased at the Bend Visitor Center for $5 or the app can be downloaded for free.