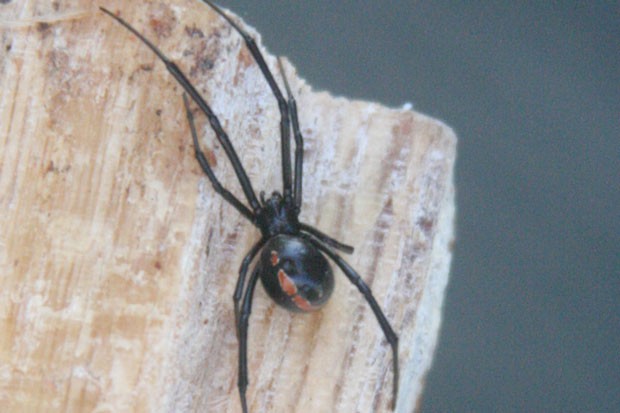 Let's begin this story with the high points regarding the spider genus, Latrodectus and the family Theridiidae, most of which are commonly known as widow spiders. (If you visit Africa, however, you'll find they have the common name of button spiders.) The accompanying drawing by my son Caleb is an African brown widow recently reported by Portland's KGW news, having been carried into Oregon, probably from California. According to the Oregon Department of Agriculture, the spider was confirmed to have been seen at a property in Oregon City in September.

The genus contains 31 recognized species distributed worldwide. In Australia they're known as redback spiders, but all of them—in one place or another—are known as "widow spiders." That's because, long ago, someone noticed that the females sometimes ate the males. In that same topic, male Latrodectids are about one-third the size of the females and get the mating done with as much tenderness as possible, so as not to be eaten.

Oh, and one more point: the silk from that genus is the strongest known substance on earth. A structural engineer some time back figured that the Golden Gate Bridge could be supported with strands of black widow silk woven into the size of a pencil...

And here's some good news: all widows can be found living in dark (or shady) places. It's a general rule that, unlike some human widows, spider widows do not like places with lots of sunlight. They also vary widely in size; some have an abdomen (the back end) the size and shape of, but smaller than, a pea. The widows in warmer parts of the world are about the size and shape of the tip of your little finger, and in most cases, the adult females have a reddish hour-glass mark on the ventral side (bottom) of their abdomen.

Yes, they all possess a pretty dangerous venom, as well. (Not "poison;" poison comes from plants, while venom comes from animals.) These small female spiders have an unusually potent venom containing latrotoxin, which causes the condition known by the medical community as latrodedtism.

The symptoms of the bite are often very painful and medical attention is recommended, as complications can arise. Treatment usually involves administering opiates to lessen pain, and benzodiazepines for spasms. 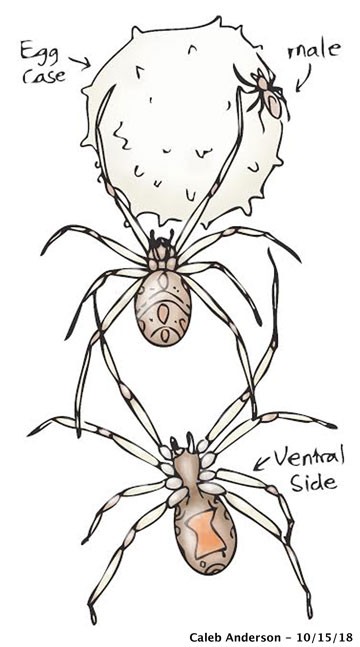 Female widow spiders have unusually large venom glands and their bite (not sting) can be particularly harmful to large vertebrates, including humans. However, despite the notoriety, Latrodectus bites are rarely fatal or even produce serious complications, except for infants and older folks (like me).

Therefore, in my opinion, their bite constitutes a medical emergency. If you think you have had a bite from a black widow, call 911. Ordinarily, the body mass of a healthy adult is sufficient to dilute the venom to less than a fatal concentration. But then, there's Murphy's Law.

(I'd better clear up another point. In most species, only the female spider is capable of effectively delivering the venom into humans, as the males have much smaller chelicerae (jaws) and therefore carry less venom—or the tools to deliver it).

In my opinion, it will take several years for the brown widow to become noticeable in Oregon. Like their sisters, they, too, will move into physically darker habitats of human society, i.e., into the darker crawlspaces under our homes, dark basements, pantries, cubby holes and outside in hollow logs and dark wood piles and in abandoned badger holes.

They may also compete for space and food, and that'll be worthy of someone doing a master's or PhD study to learn what happens. Doubtless, both species will survive, as they are both found in Florida, New York, the Midwest, California and now Oregon.

As with all creatures of our area, I'd like to know if you bump into one of the new sisters—in Sisters—in a crawl space under your house, or under the old chicken house when you build a new one.

One more tip about where widows go to live. Their appetite for prey runs from mice, small frogs and salamanders all the way to ants and cockroaches. So here's a suggestion: Why not leave the harmless house spider to live in the back of your clothes closet and under the bed? They will eat the moths that ruin your clothes and insects that crawl over your face in the middle of the night, forcing the widows and their kin to live under your house and away from making accidental and unexpected contact with you.