The Boogeyman is Real

My older brother got me into horror movies—not as a thing we could share and enjoy with each other, but as a defense mechanism that helped harden us to the crappy childhood we were sharing together. He needed horror like a fish needs water and would spend most of his paychecks ordering accurate and limited-edition Michael Myers Halloween masks and jumpsuits.

When I was a kid, maybe sometime around eighth grade, my brother started playing a game. He lived outside in a rickety old Quonset hut filled with scrap metal, broken records and spiders, with a bare bulb hanging from the ceiling on the opposite end of the hut from the door. 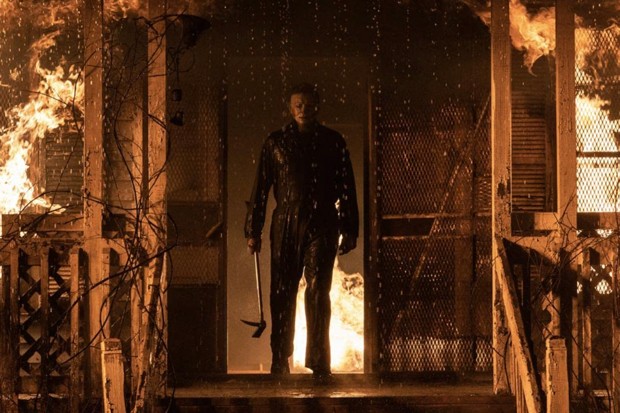 The game was simple: he would call me to come outside, late at night, and enter the Quonset hut. I would have to walk from one end of the room to the other and turn on the lightbulb. But before I got to the precious light, my brother would melt out of the shadows, fully dressed as Michael Myers (complete with coveralls and a butcher's knife), and silently "murder" me before I could turn the light on. From the moment I entered the room to the moment he held the knife to my throat, he wouldn't utter a sound...just like Myers himself.

Ever since those days, the "Halloween" franchise has been a huge part of my cinematic development and growth as a fiction writer. Michael Myers was my actual childhood boogeyman, so whenever a new reboot or sequel or rebootquel is released, I'm there opening weekend to let the familiar feeling of John Carpenter's iconic score wash over me. The music, the image of the painted white Captain-Kirk mask and the running, screaming teenagers create a very strange and complicated contradiction of feelings inside me: an unholy combination of nostalgia and bone chilling, paralyzing fear.

The point is: I know the "Halloween" movies better than any other film franchise in history. I know which is the most underrated ("Season of the Witch," closely followed by "Halloween 4"), which is the most overrated (2018's "Halloween" had its moments but just doesn't get there for me) and the names of every secondary character and street in the fictional town of Haddonfield, Illinois. These movies are imprinted on my DNA like we're family.

David Gordon Green's "Halloween Kills" is a direct sequel to 2018's "Halloween," which was itself a direct sequel to 1978's "Halloween," acting as if the original was the only film in the franchise and throwing away the continuity and lore of the nine other movies in the series. That's cool, as some of that continuity and lore is hot trash water (I'm looking at you Rob Zombie), but the 2018 "Halloween" didn't fill that story vacuum with anything deeper than "Michael likes to stab."

"Halloween Kills" actually tried to double down on the mayhem, but also thematically deepen the story by positing that Michael's evil is so miasmatic and potent that it's actually infecting the town of Haddonfield like a virus, causing mob mentality and violence to run rampant. That's an interesting idea for a horror flick, even though "Halloween Kills" doesn't really have the time to get into it and is way more focused on Myers yeeting his way through dozens of townsfolk and being an unstoppable agent of chaos and knives.

"Halloween Kills" is also the second film in Green's new "Halloween" trilogy ("Halloween Ends" comes out, you guessed it, next Halloween), meaning that there's no satisfactory ending here, just an ellipses on the story of cinema's greatest slasher. The movie is also filled with terribly stilted dialogue, several wooden performances, some brutality that almost feels out of character for Michael Myers and multiple kills that could've been directed with much more style and grace.

None of that matters to me, though. Every trip I get to take back to Haddonfield is like a tour of a childhood home, except instead of looking at all the things that have changed over the years, it's all trapped in amber with the only differences being my memories. The "Halloween" movies don't exist on a binary scale for me because they are all good and all bad and everything in-between. As soon as that iconic piano melody kicks in, I'm that little kid in that cobwebbed old out-building, praying that the boogeyman doesn't get me. There's no grade for that.