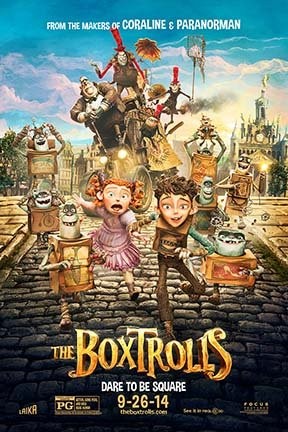 The new animated adventure from the geniuses at Portland's Laika Studios, the brains behind Coraline and Paranorman. The Boxtrolls follows an orphan named Eggs who was raised by underground dwelling, trash collecting trolls and his attempts to protect them from the evil exterminator Archibald Snatcher (voiced by Ben Kingsley). Laika takes their time with projects making sure they are up to the usual beautiful standards they have set and The Boxtrolls looks like it will be just as special.

The Boxtrolls 3D is not showing in any theaters in the area.