Like any college student, Colin P. has his share of stresses—balancing difficult homework assignments, passing midterms, all the while working a part time minimum-wage job and squeezing in the odd social activity. "It's been an adjustment period for sure," says the 29-year-old Army vet, who moved to Bend just a few months ago.

"It's been much more difficult than I anticipated... I'm feeling drained. Sometimes I wonder if I'll even make it to next term...especially since it's been hard to keep up on showers and it's been getting so cold at night. I mean, 13 degrees in October? I'm worried about the actual winter, man."

Showering and staying warm is difficult for the hopeful student because, Colin, like a growing number of Bendites, doesn't have access to bathroom facilities, a furnace or even a bed. That's because he lives in his car.

The housing affordability crisis, so prevalent in recent years, has exacerbated a homelessness crisis. Local advocates report a growing number of individuals who can no longer afford stable housing spend nights sleeping in their only asset, their vehicles.


The demographic is varied and the true numbers hard to gauge—from transitory situations like Colin, to students and travelers, to the chronic homeless bouncing in and out of shelters.

"We know a lot of people [live] in their cars," says J.W Terry, executive director of Central Oregon Veteran's Outreach, which provides homeless services in Crook, Jefferson and Deschutes counties. More than 55% of the population they service are non-veterans. Speaking to Colin's situation, Terry acknowledges it's not a unique case. "We have a lot of veterans going to school that live in their cars... and contrary to popular belief, living on campus isn't a heck of a lot cheaper than living off campus."

Touring Colin's cramped wagon, the student stashes his belongings to one side so he can lie down at night and pins up makeshift curtains for a bit of privacy. He showers once a week, on Wednesday, at the shower truck outside of the Bend United Methodist Church. He's been trying out different areas to park, from westside neighborhoods to Bureau of Land Management and U.S. Forest Service areas. He likes to be close to school to cut down on gas costs, so he opts for city streets during the weekdays, which "can get hectic if you choose the wrong neighborhood," and the forest for weekends. He says he's stressed constantly about being caught and hides his homeless status from work colleagues for fear of being stigmatized since, "I'm not living in a van, you know. It's a shitty car.

"I've gotten my first grey hair this year," he says half-chuckling. Most of his interactions with homeowners have been brief. "I mostly just have experiences with passive-aggressive notes being left on my car telling me to move. Twice when I parked near a nicer home, I had a police encounter because someone reported a 'suspicious vehicle.' It can be stressful being woken up to a flashlight being shone straight down onto you."

Kathy Skidmore, COVO's executive officer, talks about the stresses she sees with those experiencing homelessness. "Once you're homeless, everything starts falling apart. You lose your credit, your rental history... which impacts you if you ever want to rent or buy a home. It's tough."

COVO offers services for those in need and can give assistance to application fees, deposits and "other barriers to get into housing," including, "addressing legal or credit issues, anything that is a barrier to be successfully housed."

Homelessness on the rise

In 2019, the number of people who experienced homelessness in Central Oregon jumped up 12% to 880 people since the previous year, according to the annual Point in Time report carried out by the Central Oregon Homeless Leadership Coaltion, under guidelines set by the U.S. Department of Housing and Urban Development. In the entire state of Oregon, 14,500 people are experiencing homelessness at any given time, with the state experiencing the largest growth of chronic homelessness of any state in the nation, according to a 2017 report by the American Civil Liberties Union of Oregon—which brought to light the growing number of cities that are criminalizing homelessness by tightening laws pertaining to sleeping in public areas.

"Laws that criminalize poverty and homelessness fuel prejudices and stereotypes and spur further criminalization and community divide," the report reads, adding Oregon has 224 laws which "create clear barriers to performing life sustaining activities and legalize the unfair and harmful treatment of unhoused communities." According to street outreach interviews conducted by the Western Regional Advocacy Project, of 496 unhoused Oregonians, 87% noted being harassed for sleeping in a vehicle, with 41% percent being cited. 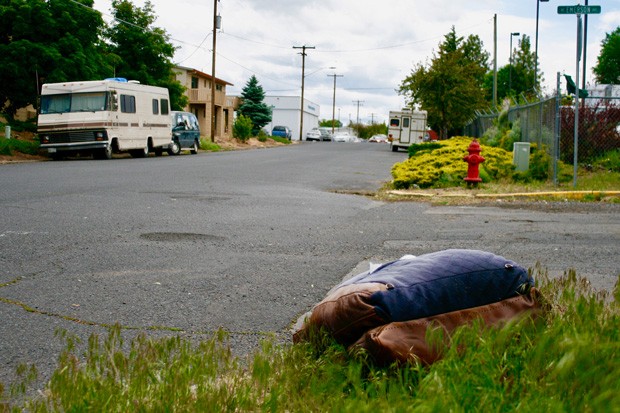 "We need to send a message that we're doing something," councilor Bruce Abernethy said in a June City Council meeting, who additionally proposed a sliding-scale fee for repeat offenders.

McConkey says that the department's problem-orientated team focuses on livability issues, stating, "They go out and make contact with people who are living in their vehicles and figuring out services and resources for them." She also adds that a new community outreach officer position will be put in place by the end of the year and will work with COVO to figure out solutions. "Is it as simple as, 'I will pick you up and drop you off at Worksource to better the circumstances?'" she adds.

McConkey, who says Bend PD is strictly the enforcers of the City of Bend's amendment and holds no official position as to the change, says those in their vehicles who are facing an interaction with an officer should be "open to suggestions from a law enforcement officer.... On where to go, what to do. And just keep moving the vehicle so it's not getting called in." McConkey states that the parking issue is strictly a "complaint-driven process... We don't actively go out and seek vehicles that aren't moving."

Her solution for those wishing to avoid the three-day rule would be to try other areas. "There's BLM. There's Forest Service. There's a lot of places people can go and stay longer than the allotted time we have in the city. Different people have different options. It depends, if somebody is living in La Pine that might be a better option that someone living in Bend."

While different land managers have differing rules, in the local area, people can stay in one place on Forest Service or BLM lands for up to two weeks at a time before needing to move on.

“Twice when I parked near a nicer home, I had a police encounter because someone reported a ‘suspicious vehicle.’ It can be stressful being woken up to a flashlight being shone straight down onto you.”—Colin B. tweet this

A quick search of the community-based social media platform Nextdoor conjures multiple posts of people irate at the growing number of vehicles parked in their neighborhoods. "Watch out for an old white dented Corolla, parked ILLEGALLY for days on my street. Lock your car doors people!" reads one post, among a scattering of similar threads complaining of "eyesores" littering the streets. "My alleyway smells like piss," reads another, "I found toilet-paper in the bushes."

When a parked car is reported to Bend PD, volunteers respond to tag the vehicle. If unmoved after three days, the car is then towed and impounded—a costly process that may amount to hundreds, if not thousands of dollars, for the owner.

McConkey says in September, 225 cars got citations for violating parking rules and 36 were towed. Apart from the parking restrictions, vehicles may be fined or impounded for other reasons, including having an expired vehicle registration of more than 30 days.

That brings up an entirely new problem: those living in the cars losing their vehicles because of lack of registration, driver's license or insurance. According to Consolidated Towing, Bend PD's contracted tower, a person retrieving their vehicle must show proof of all three. Not only that, they must pay to retrieve their vehicle in cash, as no credit cards are accepted for cars impounded by the police—a barrier which can leave many unable to pay. In the worst-case scenarios, people lose their vehicle to either auction or salvage, forcing them to seek shelter elsewhere.

A man who wished to remain anonymous because of an impending court date said he had his vehicle impounded and was unable to conjure up the nearly $900 to get it back. Not only did he face the costs of the tow, the new registration and insurance costs, but the daily impound fee, which varies drastically from tow operators and can be on average $40 to $50 a day. He said he had to pay approximately $100 to retrieve personal belongings before his vehicle was to be "crushed."

COVO Homeless Outreach Coordinator David Nieradka says he sees the problem quite often. "You see guys with four or five DUIS, no registration, living in cars. They're in survival mode. There is no game plan for them. It's just day-to-day."

Up until recently there were areas within Bend and Redmond where individuals could camp overnight without being hassled—Walmart being one. "We've lost both Walmarts in our areas," says Skidmore. "They patrol now. You can see the difference, the lot is empty. So that option's gone now."

Designated safe parking lots are spaces for people who live in their cars that don't draw the wrath of residents or the prying eyes of police officers.

Safe parking areas exist in Eugene, Los Angeles and Palo Alto, California. Beaverton, Oregon launched a new safe parking area in April, with six spots over two sites. City officials want to expand to up to 15 spots over five spots. The ACLU notes the legislative barrier, stating that, "laws limit the ability of cities and private parties to provide legal and safe sleeping arrangements for their unhoused community members." For example, a church's property could provide a place for individuals to park, however state law prohibits accommodating more than three vehicles, and sanitation facilities must be provided.

"So it's possible you just need to find people willing to do it," says Skidmore. Who then adds, "But we can't even get a warming shelter set up in Bend."

J.W Terry notes that what's needed is a one-stop camp. "If I ever won, you know the lottery, I'd set up a camp that has rooms available—you have your medical, your counseling, everything is there, one stop. You have a captive audience right there. You're not sending them all over the city." He also notes, "throwing them in a house is not enough. They were homeless for a reason and if you can't work with them for the reasons they were homeless, they're going to be homeless again."

Terry himself has noticed a slight uptick in individuals requiring COVO's assistance, and remains devoted to the cause. "It takes some community buy-in and we're not there yet... I think there's a few people starting to listen," noting that, "You can't keep doing the same thing over and over again and expect a different result. We're not getting a different result. There's an increase in homeless, so what we're doing isn't all that's needed."