The Center of It All | Beer & Drink | Bend | The Source Weekly - Bend, Oregon

The Center of It All 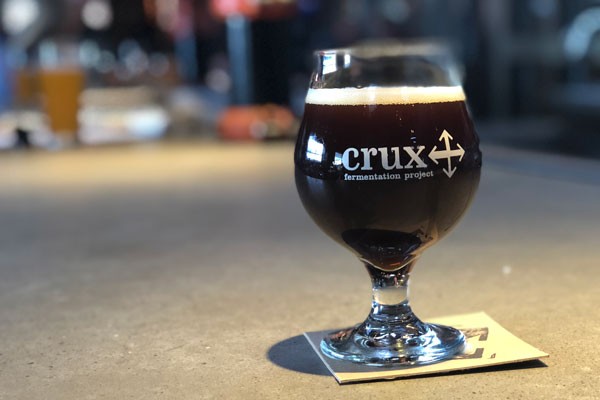 One would have to be living under a rock (or in another county) not to notice that the Old Mill District is undergoing a massive amount of redevelopment. New restaurants, new supermarkets, new hotels and oh-so-many new condo buildings—and the end's nowhere near close, what with all the bare land along Industrial Way that used to be home to warehouses, now ready for "fun stuff" construction.

At the center of all this is Crux Fermentation Project, a brewery whose name (derived from being located near the middle of Bend's urban boundaries) is even more appropriate than it was upon opening six years ago. On sunny weekend afternoons, Crux really does feel at the center of it all, from the packed taproom to the large, grassy, kid-friendly field. And not to downplay the food menu inside, but what visit to the brewery is complete without some El Sancho tacos or a big plate of shredded pork from Mauna Kea Grill? (Try heading over on April 1, Easter Sunday, for a special brunch menu and an egg hunt for the kids.)

Like much of the rest of the Old Mill, Crux is planning to expand. According to marketing manager Jason Randles, the brewery plans to take out part of the wall that separates the taproom from the outside bar, replacing it with a garage door and building a more permanent enclosure for the outdoor area. This will provide more mingling space for customers during cold or rainy days—sure to be a godsend once the crowds ramp up for the summer. (Crux hopes to complete the renovations in time for summer, and Randles says they will do their best to keep any taproom closures to a minimum.)

A pretty venue, of course, isn't the only reason to visit a brewery. You gotta have some good beer on offer as well, and Crux—fresh off winning a bronze and two golds at the Oregon Beer Awards—always delivers. Some of the highlights available now:

Krystal Juice, the first "gluten reduced" ale from Crux—under 10 ppm, although it's not brewed with officially gluten-free ingredients. This makes no difference to the taste, though, because it's a classic Citra and Mosaic-hop IPA, through and through.

Upper Left, a Cascadian dark ale (or "black IPA"). This has been something of a neglected beer variety around the Northwest lately, which is a pity—a good one marries the dark malts and hop-led bitterness to create a crushable package, and the Mosaic, Citra and Centennial hops in this one hit it out of the park.

Freakcake, the 2018 edition of Crux's barrel-aged oud bruin ale. This heavy brown uses secondary fermentation with Brettanomyces yeast to add a bit of an acidic kick, as well as a selection of holiday fruits such as tart cherries and cranberries. It's super refreshing now, with just enough of an alcohol burn to warm up anyone's stomach, but it's also great for aging. Buy a bottle, keep it in the cellar for a couple years and that burn will morph into something even deeper and tastier.