The Christmas Tree That Almost Killed Us | The Source Weekly - Bend, Oregon

The Christmas Tree That Almost Killed Us

I poured steaming hot chocolate into a thermos and grabbed a few metal camping mugs. My sister Lori had just moved in with us after leaving Los Angeles, and we were taking her out to cut down her first Christmas tree. Lori, her eight-month-old golden retriever, Mochi, my husband Jim and I were headed into the woods off China Hat Road, an area we know well after years of hiking, mountain biking and tree hunting.

The noon sun was shining bright and I was bummed that it wasn't snowing for a more idyllic holiday vibe. Winding through back roads, we climbed into an area with a bit more snow and set out looking for a compact pine. On a side road, the pine trees lined up like soldiers spaced shoulder to shoulder. This was a good spot to stop. Mochi jumped out of our Toyota 4Runner and gobbled up snow like his mouth was a scoop. Jim, small saw in hand, walked out to a sweet little tree. With a few saws the tree easily fell. We wrapped it in a tarp and set it in the back seat next to Lori and her dog. 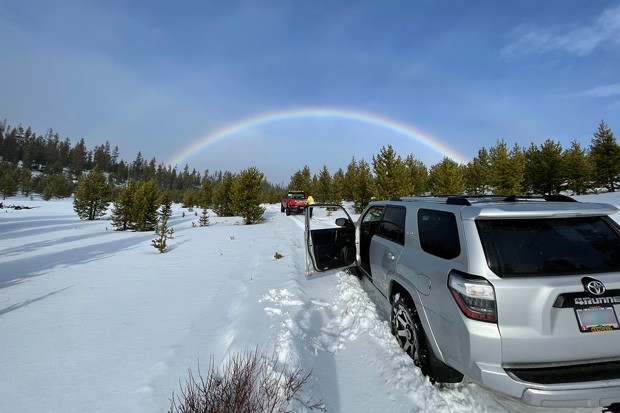 We decided to take a longer scenic road back. As we climbed through tracks in the backroads, the snow began to rise. At one point, Jim said, "we should probably turn around," but he kept going, with no good places to do just that.

"If I stop, we'll get stuck," Jim said as the engine revved. Speed didn't matter. We ground to a halt. "Do we have the shovel?" I asked. "No," Jim replied. I looked at my phone. We didn't have cell service. Jim and I got out of the car. He cut down some small trees to tuck behind each wheel for traction. Back in the car, Jim rocked the 4Runner between drive and reverse. The motion dug us in further. Jim got back out and readjusted the trees and returned with his pants soaked halfway up his calf. The next attempt to pry us out of the ruts did nothing.

"We need to see if we can get cell reception," I said, and Jim agreed. I opened Maps on my phone and pinned our location, naming it "we're f#cked." We walked up the road, staring at our phones in anticipation of seeing a bar.

"I got one!" I exclaimed after a quarter mile. Jim told me to text our friend to ask who he had recently used to tow his vehicle. The text went through but then I lost reception. "I'm going to go up this hill to see if there is better reception," said Jim, "you stay here and wait." I watched him hike up the hill, cutting through the snow with his boots. A few minutes went by and I followed. He was talking to the tow company, who said they'd arrive in 45 minutes. We trekked back and waited.

"Can you hear an engine?" one of us would ask. We rolled down the windows, each time fooled by a jet. With an hour of daylight left, Jim went back to the hill to check his phone. Upon return he said, "they keep getting stuck in the snow because they came in from the west, so we just need to wait a little longer." Daylight faded. Surrounded by darkness, Jim hiked to check his phone again.

I put David Chang's new book, "Eat a Peach," on for Lori and me to listen to. Listening to Chang talk about food made us hungry, but it passed the time. After a while I got worried because Jim wasn't back. My mind went to irrational places as I walked alone in the dark. Without my sister nearby to keep it together for, I sobbed. I worried if Jim was OK, as I knew he was feeling responsible for our situation and I was scared. 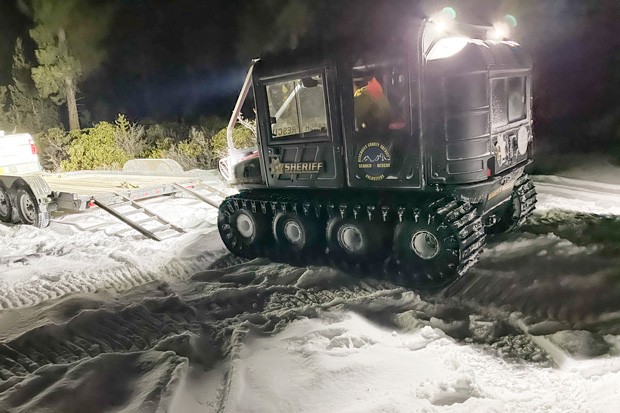 Jim is Type 1 diabetic. In our vehicle we had a blanket, 16 ounces of water, half of a very old fig bar, one huckleberry Hammer gel,12 ounces of hot chocolate and dog treats. Lori, coming from a warm climate, was wearing two layers of socks but her rain boots had no insulation and her Ugg slippers barely came to her ankles. Thankfully all of us had a winter coat, gloves and a hat. The big question was how long Jim could last without food. Since he has an insulin pump, he was able to turn off receiving insulin while his blood sugar was a little high, so food wouldn't be an issue for a while.

"Jim!" I screamed in the dark as tears ran down my cheeks and snot ran from my nose. I got closer to the top of the hill, "JIM!!!!" After a few more steps I heard Jim reply, "I'm up here." I ran to be reunited with him. He let me know the tow company kept getting stuck so they had to turn around, telling us to call 911.

The 911 dispatcher got our details and made sure we were OK. Jim let her know we didn't have cell reception at our vehicle and the location she was getting from our phone wasn't where our vehicle was stuck. "I can send you our pin," Jim hesitantly replied, "but I'm sorry it has a swear word in it." When I named our location, I wasn't thinking I'd be sharing it with so many people. A three-hour window is what we were given. As the three-hour mark approached, Jim wanted to check his phone again. I noticed a faint light from behind us while Jim was away. I frantically put on my boots. At the same time, I could see Jim walking back. A man walked up to my window. I believe he asked if we were OK, but honestly, I was just so damn happy to see him I can't completely recall. He handed me two masks.

We were warned that the ride back was going to be cramped and bumpy. None of us cared. The vehicle that made it to our location was a fully tracked, enclosed ARGO ATV, two side benches in back, the center full of rescue equipment, backpacks and snowshoes. As we drove off, I started to cry. For a few years my parents had been playing bingo on Sundays at Silver Moon to raise money for Search and Rescue—for the exact vehicle we were in.

After a 45-minute bumpy ride we made it to their truck. Our two Search and Rescue heroes guided the ATV onto a trailer. This ride was much quieter, so we had time to get to know the volunteers—one a retired pharmacist, the other in IT. We asked if we were keeping them from helping anyone else. They said no and told us about the 160 volunteers that make up various teams.

They dropped us off at our home at 10pm. I don't even know how to put into words how good it felt to be there. The next day it took the towing company four hours to get our vehicle unstuck. We lived to learn a valuable lesson: Never will we leave for an adventure like that without being prepared with food, water, traction pads (which we had in our other vehicle), a shovel, emergency medical kit with space blankets and extra winter clothing. I hope our story encourages others to do the same.