Carrion beetles perform a much-needed service in the natural world

Did ya' ever think
When the hearse goes by
That some sweet day you're gonna die?
They'll put you in a neat pine box
And cover you over with soil and rocks
Well, all goes well for about a week
And then the pine box begins to creak
The bugs crawl in, the bugs crawl out
Into your stomach and out of your mouth
And the worms play pinochle on your chin... 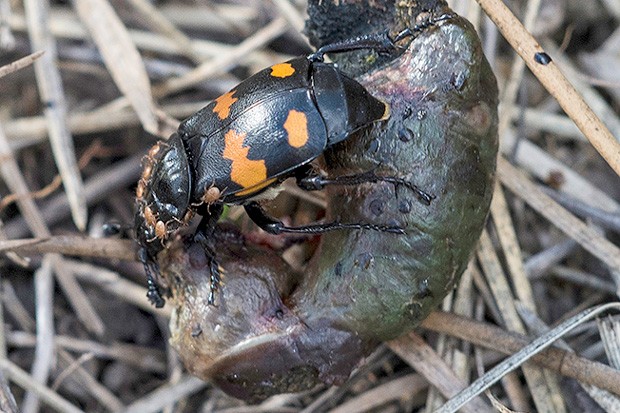 Back when I was a kid, that's a poem my uncles turned into silly song we sang while stuffing hay into the back of the barn, shoveling cow manure, cleaning the outhouse, picking corn or apples and other doing chores on the farm in West Haven, Connecticut.

Unfortunately, when I left the farm, went into the Navy, began flying, and in my later years began studying the whys and wherefores of Nature, the tune just faded away. My grandparents, parents and uncles have gone out among the stars, but memories still linger.

When my dear pals from Sisters, Brent McGregor and his sidekick, Kara Mickaelson, built my beautiful pine coffin, they were careful to make sure the lid wouldn't come down tight, and when I saw that feature, out came that old song...

If you happen to be at the Fort Rock cemetery when they put me under the soil with my old buckeroo pals, Reub Long and Shorty Gustafson, you may like to sing along with me, "Did ya' ever think..."

Death is a process of renewal. Just think how crowded this beautiful old earth would be if everything that is born or hatched lived forever. Forget it! The Master Plan for Life is laid out in such a way that renewal is a vital part of the setup.

So, when that spectacular picture included in this piece arrived in my email from my friend Kris Kristovich of Sisters, I about jumped out of my chair...which I really can't do anymore...

Everything in that picture speaks of death and renewal. Whoever left all the gopher guts (hawk? weasel?) lying around led to Kristovich's discovery.

That small pile of offal began to decay—and guess who smelled it? Yep, that multi-colored carrion beetle. "Oh boy," she must have said, beginning to drool.

And you can see her laying an egg on the awful offal while she's dining on it, and—of all things—there are mites dining on her. What a collection!

Carrion beetles perform a much-needed service in the natural world by recycling dead animals. Now, if that carrion beetle hadn't got there and it all took place in June, the other busy clean-up creatures, such as turkey vultures, would probably have arrived first and beat the beetles to it.

Turkey vultures are said to be the only bird with a sense of smell... but I'm not so sure. I've seen robins eating worms and wondered if they smell them before they see them. I've also watched ravens suddenly make a swing while patrolling a snow-covered Santiam Pass drop down to dig something out of the snow and gobble it down.

In addition to being a wonderful clean-up crew, there's no getting around the fact that carrion beetles, in close proximity put off a powerful stink. That's why taxidermists who use them to clean up trophy skulls and such refer to them as "stink beetles." Kristovich can tell you that as well; he had to get pretty close to the whole scene to get that remarkable photo.

You can even buy these beetles if you'd like to. They're called "Buffalo Beetles" by some sellers. You can get about 1,000 of them for $22.60 from one outfit.

Another supplier that sells carrion beetles even gives instructions to potential buyers: "Cleaning a small skull with dermestid (carrion) beetles requires 2500 beetles to clean it. To clean a beaver skull, use 6-7,000 beetles. Cleaning an average deer requires 12-15,000 beetles. Consequently, for cleaning a large skull, like a bear, use 25-35,000 beetles."

So, death, in some areas, is big business. But to me it's far more than that. It's the story of Life. I'm a strong believer of ongoing life in the Great Bye-and-Bye.

And further evidence comes from frequent personal experiences I'm having as I approach my time — like the other night just as I was going to sleep. Suddenly a tiny pinpoint of light opened my eyes and I thought I heard my mom calling my name...

So, when you come upon a carrion beetle pig-out, think of all the good they're doing, recycling life in all the wonderful ways nature does it.