The Cuban Flavor of Bend

On the hunt for that perfect sandwich

A few years ago, when the Obama administration relaxed travel restrictions to Cuba, I jumped at the opportunity to travel to the seemingly forbidden island. For years I had dreamed of antiquated Spanish colonial architecture, deep turquoise waters of the Caribbean, colorful neighborhoods teeming with vibrant energy and kids playing soccer in the streets. A country that had seemed to defy the odds and maintain its personality in spite of the mighty United States intrigued me. I wanted to see what the hype was about, and of course, I wanted to try one of my favorite foods, the Cuban sandwich.

To my dismay they were not easily found on the island! Granted, Alberto served us pulled pork from the roasted pig sprawled on the grill near our table. The vegetables picked straight from his finca agroecologia (agroecological farm) were the freshest I had ever eaten. Yet finding the delicious mix of Cuban bread, swiss cheese, roast pork, ham, pickles and mustard that I craved was a challenge.

After asking around and a bit of online research, I learned that Cuban sandwiches originated in Florida—or at least proliferated there. In the early 1900s, people from the island came freely to the States. Many worked in cigar factories in the areas of Key West, and later, West Tampa. Ubiquitous in Miami, I had already tasted a couple of sandwiches while in the city, but I thought I was in store for the most authentic experience possible in Cuba. Not that it ruined my experience on the island, but you could say I was a bit surprised.

Fast forward a few years to Bend, a town that offers an incredible number of culinary delights for its size, and a treasury of Cuban sandwiches.

First, you should expect a place with the name "Cuban Kitchen" to serve the real deal. True to the restaurant's roots, this is the place to discover what a true Cuban sandwich should be. Add a mojito, Cuban music and a game of dominoes, and you almost feel the urge to start dancing the salsa.

The most unique take on the Cuban is the Cubano Stromboli at 10 Barrel's westside location. Filled with the expected ingredients minus the pickles, the cooks also add red peppers and cilantro to the mix, but the best addition is the addictive IPA mustard. The concoction is so tasty it can be eaten with almost anything! I may have even finished it off by itself when there was nothing left to dip. 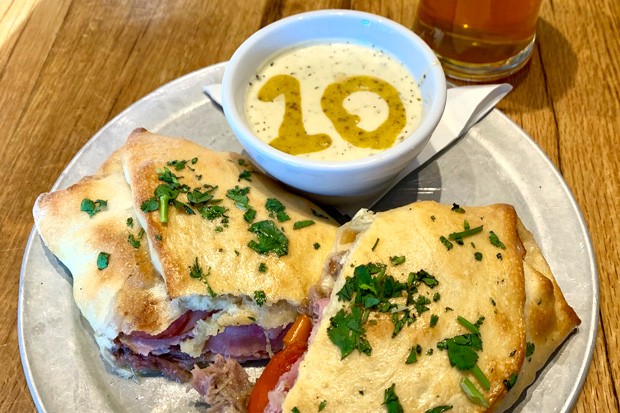 Craft Kitchen and Brewery may be best known for its savory briskets, and they take advantage of that specialty by creating a delicious pork belly Cubano. Cooked just right, the tender pork has a powerful, mouthwatering flavor. Add some fries or greens as a side and you have magic. Just thinking about it makes me hungry.

Currents at the Riverhouse serves a more traditional Cubano on its lounge menu. The restaurant sources ingredients from local farms, and maybe this is why the sandwich tastes so delicious. One of my favorites, it has everything that makes it archetypal: fresh bread, ham, pork, and a mustard that balances the flavor perfectly. The pickles even have the cucumber taste I prefer.

After a few hours of climbing at Bend Rock Gym recently, my daughter and I hit a food truck lot to reenergize. When I spotted a Cuban on the menu at Shred Town I was easily seduced. The stone-ground mustard gives the sandwich a zesty punch. Tender bits of carnitas and melted Swiss escape from the pub roll, and a fork might be helpful to avoid messy hands. Served with a side of spuds, my belly was pleasantly filled. It was my nine-year-old daughter's first time to try the sandwich. She's now hooked and often asks, "When can we go to Shred Town?" 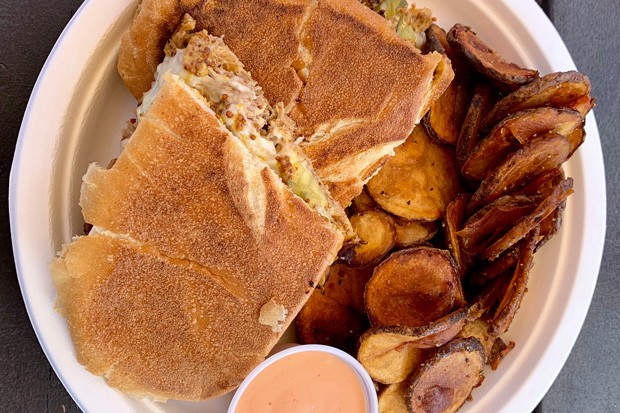 Other places around town have Cubans on the menu, and maybe I have yet to try the best, but those I mentioned are the cream of the crop. As is the case with any dish, creating a delicious sandwich is a talent, and the Cubanos in Bend have evolved into an art form.