Diving into The Abyss tasting tray

The spookier the fall nights get, the darker the beer gets! Once a year, Deschutes Brewery releases The Abyss, usually with a few varieties. Deschutes provides a special Abyss flight at its pubs featuring the current year versions of The Abyss alongside those from previous years. I began my flight with the The Abyss from 2019.

The first thing to notice is the very strong black licorice, in both the aroma and the flavor. I spoke about this beer with my husband and determined that the previous versions of The Abyss were also very licorice-forward. The brewery uses brewer's licorice, which provides more of a spice flavor like fennel, rather than the sticky sweet flavor of the candy. Aside from the forward flavor of the licorice, there's also an underlying vanilla bean and molasses flavor. As this beer ages, those flavors will come forward, and the licorice will mellow out nicely. 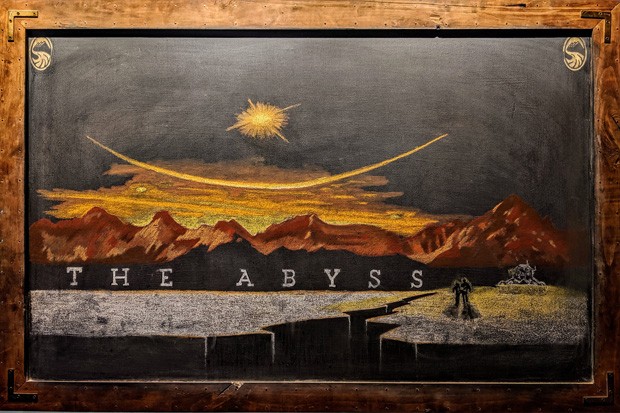 The next two beers in the flight were variants of the 2019 Abyss: Old World and Port. Old World was aged in sherry barrels (well some of it was, and then it was blended with the straight-up The Abyss). Old World has a slightly thicker mouthfeel, but the flavor is brightened by the fruitiness of the sherry, adding a touch of oaky wood and raisin to both the flavor and aroma. The Port version has a "hot" aroma of alcohol, and licorice is still the defining aroma. Port finishes much like the standard The Abyss, except for a light finish of plums and woodiness from the barrel, as it is 100% aged in the port barrels.

The flight finishes with a few oldies but goodies, including The Abyss Rum from 2017. I recall the rum version being strong enough to grow hair on your chest. After aging, it's really mellowed out. It's still very rum forward, but is now much more subtle, allowing the other flavors through. The licorice is still present but balanced with the lovely flavors of cherries and molasses. Now is the perfect time to drink that beer, in my opinion.

The two variants from 2015 round out the flight, including The Abyss Cognac and The Abyss Rye. I finished off my bottles of these a couple of years ago, so it was fantastic to taste them aged a couple of years. With the cognac version, there's a strong aged-wood aroma; the flavor still cognac forward, the alcohol mellowed significantly since 2015. The rye is still very much a rye beer, becoming even more earthy as it aged. It's still a tasty beer, but both the Cognac and the Rye were better a couple years ago. The different flavors are less defined; slightly muddled now. Still, I was totally happy to drink it!

These beers are limited release. I buy the variants each year and age them (usually two years, if we can wait that long). During the holidays we share the aged beer, tending to share it during dessert, because The Abyss pairs so well with sweets including chocolate and cheesecake. Dare I say that it's beginning to look a lot like Christmas? Too soon? OK, fine... Happy Halloween! Now get out there and drink some dark beers!