The Dreamers Who Do | The Source Weekly - Bend, Oregon

The Dreamers Who Do

For local DACA recipients, the fear of legal uncertainty—and deportation—is an everyday thing

Liliana Bernabe was born in Guadalajara, Mexico, and crossed the border with her parents as soon as she turned five. After short stints in California and Colorado, her family moved to Oregon, where they've been living for the past 15 years. "I found out that I was undocumented when I was around 12," she said in an earlier interview with the Source. "When I was 16 I was able to understand exactly what that meant." 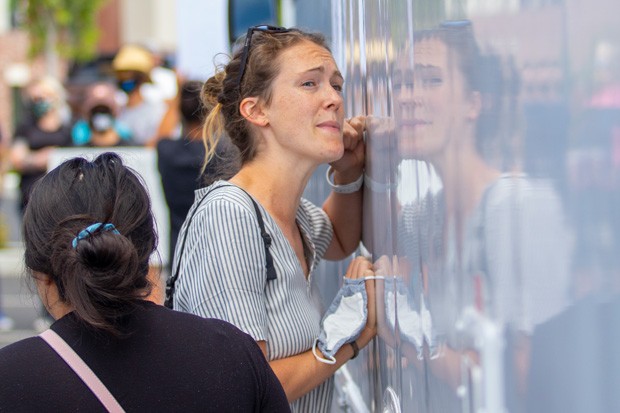 Bernabe explained that while she never grew up fearing her own deportation, she was constantly afraid of losing her parents.

"I grew up as an American," she said. "To me, that's what I am. I'm a student. Who would want to take students? I did have a constant fear when my parents weren't home. I would think, 'If they were taken, what would I do? What would me and my siblings do?'"

Wendi, who preferred her last name remain private, was born in Mexico City and traveled to the U.S. with her family when she was 7. "We moved here for several reasons," she explained. "The standard, you know, to start a better life. My dad had a reliable job opportunity, he opened up a restaurant with his friend. We moved in with friends until my mom was able to purchase a home on a rented lot, and we lived in that house for about 17 years."

The two women found themselves in Bend, where they have lived, worked and established themselves as members of a close-knit community.

Bernabe was 16 and Wendi was 18 when they became Deferred Action for Childhood Arrivals recipients, granted a permit that would protect them from deportation and legally allow them to work in the U.S.

In 2012, President Barack Obama created the policy geared toward protecting the Dreamers— immigrants brought to the country as children. Since 2016, the Trump Administration has been actively fighting against this legal protection. In June, the Supreme Court overturned the Administration's attempt to end DACA.

Both women shared their experiences applying for and receiving their permits.

“I started to believe that division was here in Bend—until I showed up on Wednesday. To see that the community showed up to support racial minorities was amazing.” —Liliana Bernabe tweet this

"It was a pretty nerve-wracking experience, knowing that the USCIS [United States Citizenship and Immigration Services] had access to my information," Bernabe explained. "My address, my phone number, my parents' information. I didn't know if it would put us in danger. My parents told me not to live in fear. They said, 'The opportunity for a better life, that's what we brought you to the States for.' I got my driver's license shortly after that, and being able to apply for in-state tuition made a huge difference. It was nice living without fear that something would happen to me so that I could be there for my parents if something ever happened. We were able to buy a home thanks to the DACA permit. We're very proud homeowners; it shows the hard work that we've been putting into the country. We're not here to harm anyone, but simply to live in peace. We don't want to take anyone's job."

Wendi noted that she never felt at risk of deportation until she applied for her DACA permit. "They asked for an incredible amount of information," she said. "I applied in 2012, and I had to give access to pretty much all of my personal information so that they knew I wasn't a threat to the country. Once I received my permit I went out and got my license. I was finally able to participate in things that my neighbors and friends were participating in."

As Bernabe and Wendi reported, DACA put their minds at ease. In light of recent events in Bend, however, the stability they had long felt was again compromised.

On Aug. 12, hundreds of locals showed up in hopes of preventing U.S. Immigration and Customs Enforcement officers from departing Bend with two undocumented men who ICE alleged were a threat to the public. After several hours of protest, federal agents forcefully intervened.

"This isn't the first time they've showed up," Wendi explained. "They've been here several times; this was just the first time it became big news. One of the biggest issues with ICE being in Bend this time was that two large unmarked buses were not necessary to pick up two people; really, this could've been handled by the police department rather than a federal entity. There were lawyers present requesting warrants; the officers refused to read these men their rights. Anyone else being arrested has those rights, that's part of the freedom, part of the greatness of this country. When the federal government oversteps their boundaries and doesn't follow procedures or reinforce the protocols that are meant to protect and serve, then it becomes a political issue."

ICE officials, aware that information about the seizure of undocumented individuals is often misunderstood, shared this with the Source from its website:

Bernabe noted that when ICE arrived in Bend, fear quickly bubbled to the surface.

"My partner and I are both DACA recipients; we had a conversation before the protest that we might need to prepare for ICE to grab us, too," she said. "It was a nightmare. It's still a nightmare. I'm anxious, I'm paranoid. I have to think, 'What could happen to me today because of my skin color?' This is our daily life. We don't know if we'll walk out onto the street and be taken by our government. It isn't just the Latinx community, but the Black community, the white community; we are all living in this bubble of fear, anxiety and uncertainty. Trump brought division upon the U.S.; now it's turned into an 'us versus them' kind of thing. I started to believe that in my own head. After Trump said something negative about Mexicans I would go to a restaurant and look around to see who was staring at me. I started to believe that division was here in Bend—until I showed up on Wednesday. To see that the community showed up to support racial minorities was amazing."

Both women encouraged locals to exercise their right to vote—a right they do not yet have.

"Having the local community stand up for these two individuals made a pretty good point," said Wendi. "It's important that community members keep this message in mind come November."

Bernabe concluded, "I can't vote; I would love to vote," she said. "The elections of 2020 mark my future. The future of my community."