The End of A Free & Open Internet?

As net neutrality is repealed, some experts think the fight for a free Internet is just beginning

"You could make the analogy that Internet bandwidth is like water," begins Dan Alberghetti, an associate professor at Central Oregon Community College. "Should only the people that pay more get strong flowing water and the rest of the people just a trickle to merely wet their lips? Or maybe there should be different classes of water, some better or cleaner than others?"

Alberghetti, a professor of computer information systems, says that the move to remove net neutrality—voted on Dec. 13 by the Federal Communications Commission in a 3-2 partisan vote— means service providers can start prioritizing some companies' data traffic over others, potentially making it harder for small companies, startups and individuals to compete.

"To increase profits, service providers could start charging different rates for downloading things like video, movies and telephony traffic," he says, "...and technologies may find that they are either blocked or need to pay higher rates to avoid a competitive disadvantage due to poor bandwidth." 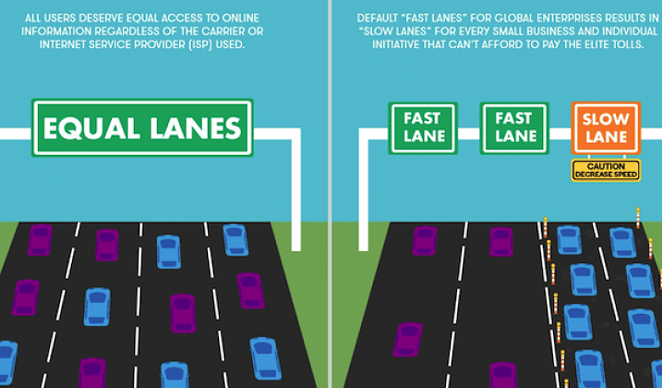 Alberghetti joins over 50 experts who point out the technical flaws in the FCC's proposal for removing net neutrality. Sen. Ron Wyden, D-OR, and Oregon's Attorney General, Ellen Rosenblum, are among those opposed to the FCC move to repeal the 2015 Open Internet Order, which some experts say effectively ends equal access to the Internet. Prior to 2015, content could be slowed down, blocked or sped up depending on where the original content originated from.

He illustrates his point by quoting a recent Business Insider article, "...When was the last time your cable provider or wireless carrier was transparent with you?" wrote Steven Kovach, who said there were "tons of examples out there of Internet providers and telecom companies abusing their power with content delivered over the Internet." Kovach went on to list examples such as the case of Comcast slowing Netflix streaming in 2014.

"Then there's AT&T, which started a sponsored data program which meant apps could pay money to AT&T so they wouldn't suck up your data plan if you use them — giving them an unfair advantage," wrote Kovach. "That's hardly a level playing field.

"The net neutrality rules put in place in 2015 largely addressed these problems to make sure all traffic would be treated equally. Now it's going away.

"That's great news for the telecom companies and Internet providers that have been charging you exorbitant amounts for your Internet connections over the years, but it's bad news for you."

..When was the last time your cable provider or wireless carrier was transparent with you?" —STEVEN KOVACH, BUSINESS INSIDER tweet this

In an era in which upgrading fiber optic infrastructure is a multi-million dollar undertaking, few small network providers exist, giving way to large corporate monopolies. Large giants such as Centurylink and Comcast can effectively take over a market if there are no regulations. Experts say consumers could potentially face severe price increases in an unregulated market with few providers. In rural Oregon, for example, only two high-speed Internet providers exist in some areas.

Wyden— one of the earliest and loudest voices regarding net neutrality—condemned the FCC's decision, stating that it would hurt Oregonians.

"Consumers, rural Americans, small businesses and pretty much everyone except Big Cable executives will lose out thanks to this terrible proposal," wrote Wyden, who led a campaign this past year to keep net neutrality.

Meanwhile, Rep. Greg Walden, R-Hood River, has long said the rules interfere with business. A joint statement released by Walden's office last week said it shows the FCC "understands the importance of making sure the Internet continues to flourish under a light-touch regulatory regime." Advocates such as Walden say consumers shouldn't worry about increased costs, as the free market will regulate itself and safeguard consumers against steep price increases.

"One-third of nighttime Internet traffic in the United States comes solely from Netflix," says Chris Cappuccio, co-owner of local ISP provider, Yellowknife Wireless Company. Cappuccio doesn't foresee the repeal changing much for Central Oregonians, stating the "cost is a drop in the bucket," for Netflix to pay large broadband providers such as Comcast to safeguard streams for their content—though he acknowledges that in some rural areas, consumers may face price increases. "If the Internet was only one or two companies, then it would be a different scenario," says Cappuccio, adding that his company will not be passing along costs to its consumers.

Cappuccio says people's focus should lie in regulating social media instead. "I'm more worried about how Facebook algorithms feed us biased information, effectively changing our society, making us more partisan and uninformed," he says. "That's a much bigger problem, the of these algorithms. We should be more worried about that then what the big media companies want us to worry about, which is net neutrality, only because it will directly affect them."

Net neutrality has its roots in Oregon, with the City of Portland advocating for open networks and competition rules as far back as the 1990s.

Quick on the heels of this repeal, 18 attorney generals, including Oregon's own Rosenblum, say they'll sue the FCC on the basis that more than two million of the comments to the FCC received regarding the repeal may have been made using fraudulent identities, alleged automated "bots," with some alleging submissions came from Russian email addresses. Indeed, New York Attorney General Eric Schneiderman says his office has so far found more than two million fraudulent comments that violated the Administrative Procedure Act.

"BendTel is in favor of net neutrality. We have and will continue to treat all customer Internet access the same and will not block, speed up or slow down, nor charge fees to access websites or content providers." — CEO TOM BARRETT, BENDTEL tweet this

And lining up to sue. Nonprofit Free Press said in a written statement it will mount a legal challenge against the repeal, joining others such as the National Hispanic Media Coalition, which said it will challenge the law. NHMC said the repeal is a "frontal attack on Latinos and other communities of color, who already face substantial barriers in getting online, staying online and having Internet," said Vice President Carmen Scurato.

All groups would need a federal injunction granted by a judge— Internet providers could start moving quickly to repeal net neutrality even as legal challenges move through the courts.

As mentioned, some local providers, including Yellowknife and BendTel, say they will not increase rates. BendTel CEO Tom Barrett wrote in an emailed statement, "BendTel is in favor of net neutrality. We have and will continue to treat all customer Internet access the same and will not block, speed up or slow down, nor charge fees to access websites or content providers."

Calls for statements from Bend Broadband and Webformix regarding the repeal of net neutrality went unanswered.


BLOCKING Internet service providers could not discriminate against any lawful content by blocking websites or apps.

THROTTLING Service providers could not slow the transmission of data based on the nature of the content, as long as it is legal.

PAID PRIORITIZATION Service providers could not create an Internet fast lane for companies and consumers who pay premiums, and a slow lane for those who don't.