The iconic butterfly is endangered because its habitat is imperiled. Here's how to help.

Headlines in conservation magazines, and even in newspapers have been crying: "Monarch butterflies on the verge of extinction!" And they are, all the way from Maine to California. Their populations have dropped over 90% in the West and up to 84% in the East.

According to the International Union for Conservation of Nature, which recently added the Monarch to its Red List and designated it as "Endangered," three threats have caused the Monarch populations to decline: habitat loss, widespread use of agricultural chemicals and climate change.

Milkweed is the key to survival of Monarch butterflies, and the move to list the Monarch as an Endangered Species will hopefully place protection on milkweeds. It is the only plant the caterpillars can eat. Unfortunately, the agricultural community has been systematically destroying milkweed ever since the cattle industry discovered the plant sickens cows if they eat it. Now that same farming industry is killing even more milkweed with herbicides and by not allowing irrigation water to reach them, which guarantees the annihilation of the Monarch, everywhere. 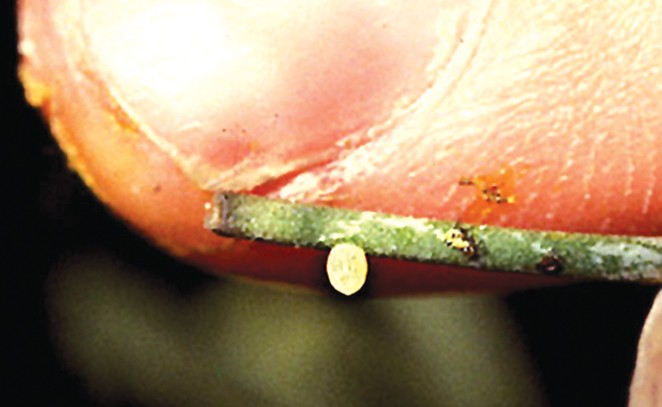 Our Monarchs, found from the western side of the Rockies, spend winter congregating on the coast of California, several locations in Arizona and some join their eastern cousins in Mexico. When the sun tells them spring has arrived they head north to the first milkweed patch, lay eggs and eventually die. When that new bunch becomes adults they continue north to the next milkweed patch, lay eggs and eventually die. This process finally gets the Monarchs all the way to Canada, and they spend summer reproducing in local milkweed patches until the sun tells them winter is coming.

At that point there is no more egg-laying in the Monarch society. They put on fat instead, preparing themselves to fly south thousands of miles to where they will spend winter with their friends.

Throughout their lives Monarchs need nectar from flowers to fuel their flight and milkweed to lay their eggs on. No other plant will do. Climate change is altering the seasonal availability of these Monarch necessities as well as accelerating habitat loss through wildfires.

One of the finest Monarch conservation projects to take place in Central Oregon was the development of a wayside at the Sisters Middle School.

"Journey's Flight" a book about the travels of a tagged Monarch that came from that wayside, was written by the students of Mrs. Susie Werts' class and is well worth the read. 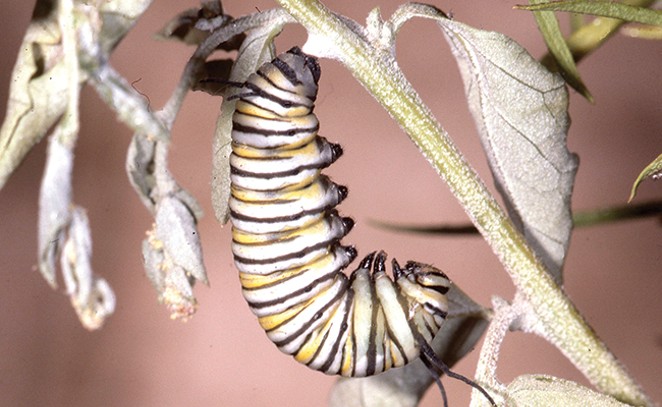 The photos at the top of this story will give you a look at the life of a Monarch Butterfly, from egg to adult. In Monarchs, an egg is laid on the underside of a milkweed's large leaf. In the female's brief time during the first egg-laying process she will deposit 300 to 500 of them — all on milkweed. Oh yes, she may mate again and again, and before her job is done, she will have deposited up to 1,800 eggs.

From three to eight days nothing appears to be happening as the eggs stay quietly glued to the bottom of the leaf. Then a slight trembling begins to shake the egg and it slowly splits open, releasing a tiny grayish/green caterpillar which immediately begins to eat its egg case and the area around its feet.

There are five stages, known as instars, to the caterpillar's life. At hatching, the tiny larva is almost translucent, but has a large black head, and is about 1/8 of an inch long.

The second instar develops a pattern of white, yellow and black bands on the outside of the growing body. It is now about 1/2 inch in length, and very busy gobbling up as much milkweed as it can hold. That coloration of its growing body is a very visible warning to birds — like bushtits — that it is not a good thing to eat.

The third instar caterpillar continues chomping away while on the upper surface of the leaf, safe from predators because of that vivid black, white and yellow striping, and is nearly an inch long.

Fourth and fifth instars have a more complex banding pattern with white dots appearing on the prolegs near its back, and if another caterpillar begins to compete with it, a very exciting battle will develop. At full size, the larva will be nearly 2 inches in length.

Now comes the time for the miracle of metamorphosis. The caterpillar's tiny brain has a goal in life: to find what it "thinks" is a safe place on a plant nearby and spin a silk pad on a downward-facing surface. At this point it turns head down and with its hind legs grasps the silken pad. All movement stops.

It hangs in this "J" form for some time then the outer skin of the caterpillar splits open, revealing a lime green chrysalis embellished with golden spots around the exterior. And it is, within that chrysalis, that the miracle of metamorphosis will take place.

Oh, how I wish I could be a witness to this biological masterpiece. That fat living caterpillar now begins to dissolve into a genetic "soup," while Life continues to go on. As the living cells begin to change we see three distinct body parts beginning to form: head, thorax and abdomen. Within those body parts are different eyes, different mouth-parts, a reproductive system, breathing system, brain, and muscles to drive the growing wings and six legs.

To make a 100% success, plant a big pollinator garden, maybe where there was once a lawn or rock-pile. Not only will you hit a home run with milkweed you’ll have the bases loaded with the pollinator garden. tweet this

This will take all of eight to 15 days to complete, and then, the chrysalis will become transparent and within 12 hours its skin will split open and the adult Monarch will emerge. The new adult will begin to pump up its wings with fluid and prepare for flight. The same message of protection is displayed with those big orange and black wings.You, Dear Readers, can play a big part in helping this species work to be successful. If you have a spot on your place that's damp most of the year, please start a colony of Showy milkweed, or lacking the water, Narrow-leaf milkweed. Then, to make a 100% success of that activity, plant a big pollinator garden, maybe where there was once a lawn or rock-pile. Not only will you hit a home run with milkweed, you'll have the bases loaded with the pollinator garden.

Locally, you can go to Winter Creek Nursery for native milkweed plants (wintercreeknative.com) and Deschutes Land Trust for seeds (deschuteslandtrust.org). In addition, both the Xerces Society (xerces.org) and Monarch Joint Venture (monarchjointventure.org) have excellent information and ideas on how to save Monarchs.

Editor's note: The Facebook group, "Pollinator Pathway Bend" is another helpful resource for information and inspiration on pollinator gardens in the local area.