The Excellence of Murs | The Source Weekly - Bend, Oregon

The Excellence of Murs

I first found Murs 10 years ago while watching MTV. His "Rock The Vote" spots kept coming on in between my shows, during the heat of the 2008 election—coming in conjunction with the release of his album, "Murs for President." I was only 13 or 14 at the time, so obviously I couldn't vote, but I was fascinated. Who is this rapper with cool hair? If he wants me to vote one day, I probably should, I thought. 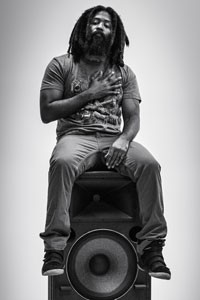 Murs is the underground—or, what the underground was. He is a voice of real substance in rap—a theme questioned heavily today with the new crop of artists taking over the mainstream. Since the '90s, Murs has been delivering raw stories with honesty and conviction. He's not one for facades or feeling the need to put on a front; the only thing Murs knows how to rap about is the real stuff.

On his 2018 album, "A Strange Journey Into the Unimaginable," Murs opens with a vulnerability not often matched: "Then when I cry in public I could finally do so without having someone tell me I should feel embarrassed. Cause I'm not—and I cried a whole lot. When I filed for divorce and when the homie got shot. And not one time did I laugh at Tyrese's tears, 'cause when I was separated from my son I cried every day for almost a year." It's that honesty and openness that makes Murs an underrated treasure. He'll be rapping about superheroes one minute and socioeconomics the next.

If you take a look at the likes of Kendrick Lamar and J. Cole, you might notice they're doing some things similar to what Murs has done throughout his career. He's a rapper's rapper – uplifting not just other artists, but being a voice for communities and entire segments of the nation, as well. In a 2018 interview with the okayplayer website, Murs said, "Am I the influence I want to see in music? Yeah, definitely. Be the influence that you want to see in the world. I don't know about as a parent, I'm still growing. But as a rapper, I'm definitely... hopefully..." he continued on to reference the love and respect he's received from his elders in rap—something he said he'll always cherish.

There's a connectiveness in a Murs song that's undeniable. It's a highly vivid form of storytelling that can take you on trips to anywhere, even if you haven't experienced these things yourself. At 41, the L.A. rapper is one of the last torch-carriers from his era of California hip-hop still making high-quality music today. With over 20 years of music-making behind him, Murs sits at a spot where the past and future of rap are able to collide—which is what makes him so interesting, and hip-hop lovers old and young should still be listening to him today.