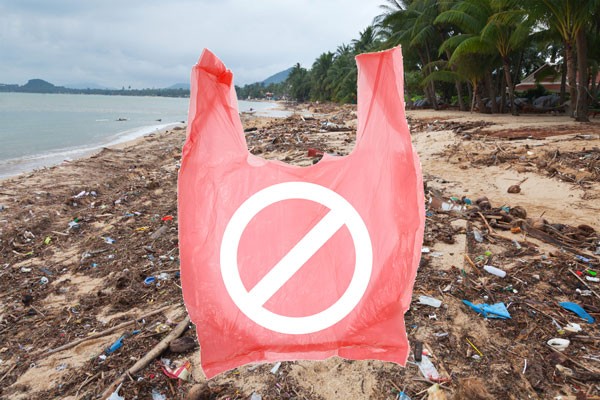 Some people treat plastic bags and other single-use items like they're taboo; others toss them into the trash or the blue bins without a moment's pause. But, both showing up inside the digestive tracks of marine animals; plastic flotillas have been seen roaming the open ocean and once-beautiful beaches have been turned into sandy recycling centers, covered with people's throwaways.

"I'd start by showing people the video of the sea turtle with a plastic straw stuck in its nose. Or show them one of the beaches in South East Asia, covered in plastic debris," said Harlin Savage, Communications Director at Eco Cycle.

Watching the painful removal of a plastic straw from the nose of a writhing turtle is brutal, but it sends a very clear message. An image of a once beautiful beach, now thrashed and defaced with an incomprehensible amount of discarded plastic is heartbreaking. The truth of plastic pollution is blatant, yet many of us continue to contribute to the growing problem.

The issue of plastic waste is being attacked by several campaigns. However, the sheer quantity of daily discarded plastic is almost unfathomable. According to Savage, the battle is being fought on many fronts, each group stepping up, taking responsibility, and pushing for progress in its community.

The original Be Straw Free Campaign was started in 2011 by then 9-year-old Milo Cress. Cress recognized plastic straws as mostly unnecessary, and realized the frivolity in which his community discarded them by the truckload.

The point of contention with the Straw Free Campaign is simple, yet there's a serious disconnect. Straws come almost standard, as if they sprouted through the lids of our beverages naturally. They are used for an extra few inches of neck-cranking convenience, and immediately tossed into the garbage. The featherweight object is easily blown out of our consciousness but in reality, according to ecocycle.org, 500 million disposable straws are used every day capable of filling 46,400 large school buses each year.

Another issue, contributing to the same widespread pollution, are plastic bags. The legislative rumblings of plastic bag bans continue in the state of Oregon. According to Peter Spendelow, Recycling Specialist at the Department of Environmental Quality, plastic bag bans have been put into legislation, but have not passed on the statewide front.

"On top of that, it's so common for these bags to be blown away, becoming litter." —Peter Spendelow tweet this

While individual cities such as Portland, Eugene, and Hood River have made progress by instituting their own plastic bag bans, the bags continue to be a litter issue, both on land, and as marine debris.

Spendelow recognizes the usefulness of some small amounts of plastic for things like bread, but also points out the fact that plastic grocery bags cannot be processed by recycling systems.

"If they're thrown away in curbside recycling, they get caught up in the rotors of the machines," Spendelow said. "On top of that, it's so common for these bags to be blown away, becoming litter."

Ultimately, excess plastic waste is a topic that must continue to be discussed. Whether our communities address them from the grassroots level, or as statewide laws, there must be a conscious effort of lessening our consumption of these one-time-use objects. The implications of using one straw or one plastic take-away bag seem inconsequential, but stepping back, looking at the big plastic-littered picture, the global consequences seem obvious.