The First Tribally Owned Museum in the West Nears 30

As Indigenous People's Day approaches Oct. 10, the first tribally run museum in the West is nearing 30 years of sharing and preserving the cultures of the Confederated Tribes of Warm Springs

Thirty years ago the Museum at Warm Springs became the first tribally run museum in the Western states. Its permanent exhibit dives into pre-colonial, Euro-American contact and the modern era of the three distinct peoples that now reside at the Warm Springs reservation, including the Wasco, Warm Springs and Paiute people. 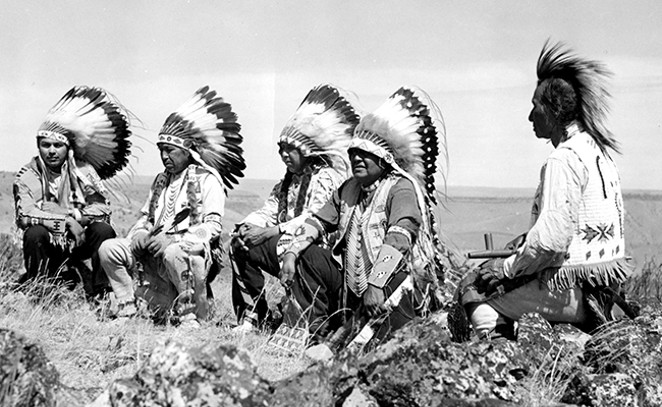 All three of these bands spoke different languages and lifestyles. The Wasco people fished and traded along the Columbia River and spoke a Chinook language. The Warm Springs band were semi-nomadic along the Columbia River's tributaries, moving between winter and summer villages. The two tribes traded regularly, despite the language barrier between Chinnokan-speaking Wascoes and Sahaptin-speaking Warm Springs.

The Paiutes lived a much different life than the river-dependent Warm Springs and Wascoes. Paiutes migrated frequently across a vast territory of what's now Oregon, Nevada, Idaho and Utah in search of game. Paiute people were the last to settle in Warm Springs, moving in the late 1800s after being forced from the Yakama Reservation in the aftermath of the Bannock War between the Shoshone-speaking Bannock and Paiute people against the United States government.

The Museum's mission is to preserve, advance and share the traditional, cultural and artistic heritage of the Confederated Tribes of Warm Springs. During its founding, museum Board President Delbert Frank Sr. said he wanted to tell the story of his people for both the public and for future generations of Wasco, Warm Springs and Paiute people. Their story survives despite efforts by the United States government to suppress indigenous languages and customs until at least 1934, when The Indian Reorganization Act was signed — reversing the goal of cultural assimilation and restoring land and mineral rights. The survival of culture among Native groups is rooted in oral traditions passed down in the household.

The main exhibit at Warm Springs is largely unchanged from when it first opened 30 years ago — though it took about as long to build the collection of antiques inside it. A committee worked for several decades acquiring artifacts through both purchases and donation. By the time the session wrapped up the museum had about 2,900 items.

"Indian antiquities, Indian objects, is a multi-billion-dollar industry worldwide. So, a lot of these items could have gone to private collectors off the reservation and disappeared. This was to set aside to be able to keep these items within the reservation for the museum," said Elizabeth Woody, executive director at the Museum at Warm Springs. "It's so important for the families that have their items in the museum, they know that they're there, they know that they're safe and that they're being cared for under Smithsonian Museum standards."

Items that once belonged to the tribes can also be repatriated from museums that receive federal funding. "Many old items, beadwork and basketry, museums are required to repatriate them if they receive federal money. So, we have the ability to get those items back and put them into our collection," Woody said.

When the Museum at Warm Springs opened it was hoped that it'd be the first of a network of tribal museums that would preserve regional culture, but progress has since been slow. There are tribally owned museums in Washington, California and Arizona but still relatively few in the West.

The artifacts in the Warm Springs Museum span the last three centuries and include practical tools like hide scrapers, mortar and pestles and the baskets and sacks used for storing berries and roots. There are also copies of the documents and treaties that've defined life on a reservation.

"The tribes have a history that predates the United States of America. And then most of the relationships that we've had with the United States government and the state is based upon a treaty, which is a contract between the United States and our nation, that we're not just an ethnic group, but we're also a true nation within a nation," Woody said. "That's important because we are partners, and do a lot of land management and a lot of natural resource management in the state and in the rivers."

Wasco populations today are concentrated in the Warm Springs Indian Reservation and the Yakama Indian Reservation in Washington. The Northern Paiute, however, with a formerly nomadic lifestyle across several states, are more geographically dispersed. Being a later addition to the Confederated Tribes of Warm Springs, there's more emphasis on Wasco and Warm Springs in the museum's permanent exhibit.

"Unfortunate because the Paiutes came onto the reservation a little bit later. And so there has been a push to make sure that they're represented fairly," said Sunmiet Maben, operations manager at the Museum at Warm Springs. "I think a lot of it is just kind of distinguishing the groups, but I think we're a little trickier so many of our families are kind of mixed so like most of us are Warm Springs and Wasco, Warm Springs and Paiute. There's a few that still kind of associate with just one, but there's a meshing of cultures."

A temporary gallery showcases exhibits usually designed by museum staff. Currently the gallery is featuring portraits of powwow dancers from across the country in ceremonial dress. "Faces from the Land: A Photographic Journey Through Native America" by Ben and Linda Marra features 36 large portraits along with a personal narrative written by the subjects.

Many of Warm Springs' collection of artifacts are stored rather than displayed, as are nearly 5,000 photographs and documents.

"The archives are one of the reasons why the museum was built, besides the collections. It was planned that it would be a repository for information and items that would serve our sovereignty, and preservation of our own history. Not through anybody else's eyes, but through our own," Woody said.

The museum is in the early stages of cataloging and digitizing its archives, which right now can be imprecise with the locations of artifacts, photos and documents. Woody estimates that the museum likely has more items in the archive than it presently knows and is seeking to learn more about archiving from professional archivists.

"We're hoping to begin a wider collection of materials and a systematic way of collecting items," Woody said.

The Museum is expanding its archives through a five-year strategic plan funded by the DeVos Institute of Arts Management. One condition of that funding is that the museum must become more of a cultural institute. Woody sees this essentially like a school or training program that teaches young people in traditional native crafts.

"We're building apprenticeship, and teaching them about what to look for, and how to do the things that we need them to do in order to create some of these beautiful things that we make," Woody said.

Workshops in the past year have focused on reconnecting tribal people to the cultural art system shared by tribal members in Warm Springs, the Yakama Nation, Umatilla and Nez Perce. The museum has also hosted a handful of guest speakers on the topic of Native languages, boarding schools and more.

In another 30 years Woody said she wants to see the building restored to its full conservatory capabilities, with an off-site collection storage site outside of the flood and fire zone the museum is in, and an upgrade of the permanent exhibit. In September the museum held its annual membership drive, which grants people free admission and a 10% discount in the gift shop.

As the museum approaches 30, Indigenous People's Day is about to have its second year as an official Oregon holiday. South Dakota was the first state to recognize the holiday in 1989, and since then 13 other states have adopted the holiday on what was formally Columbus Day — a holiday many Native people viewed as a day glorifying settler-colonialism and oppression of indigenous people in America. In Bend, Central Oregon Community College is hosting a beading workshop and screening the film "nîpawistamâsowin: We Will Stand Up," which follows the family of a murdered Cree man as they seek justice. The COCC Oct. 10 events are free and open to the public.