Thick socks. Steaming soup. A warm spot by the heater. A crop of garlic in the ground. These are the stuff of wintertime cozy feelings. Like having meat in the freezer, or jars of peaches in the pantry. Garlic in the ground equals food security, long before it pokes above the ground.

It's fulfilling to kick back and simply know that you have done the work. Now it's your garlic's turn. In the ground, it's biding its time patiently. In the kitchen, it's warming you every day. 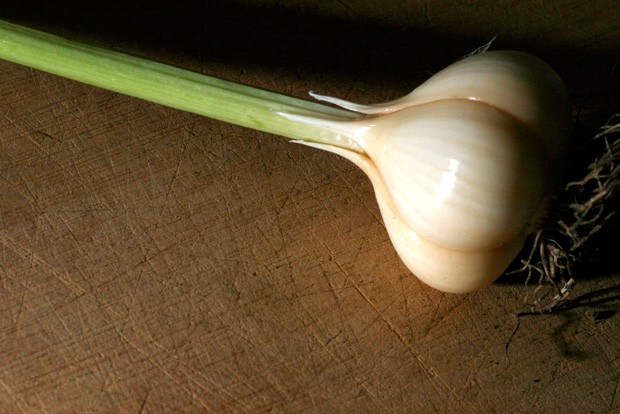 As you lounge about in socially distant isolation upon the sofa, you look up from the seed catalog mid-perusal and attempt to ponder life from the perspective of your garlic cloves, planted back in the fall before the ground froze. Activated by the moist soil, they began sending out roots from the cells around the scab at the bottom of each clove. Come spring, a green shoot will emerge from each tip. Before you know it, your neighbors will feel inadequate because your garlic is knee-high by the fourth of May, by which time their radishes have barely sprouted.

Planting garlic in the fall is part of the larger project of putting the garden to bed, and one of many winterization chores. Your first time, it may feel unusual to be digging and planting in the dirt while the autumn leaves are blowing around. It's oddly optimistic to be planting, even as the grey cold builds. Like making babies during wartime.

Garlic growing is a four-season practice. During the late summer months after the garlic harvest when there isn't even a crop in the ground, the garlic grower nonetheless is at work. I tarped my garlic patch in August. By November the soil turns over like soft butter. In Spring you're weeding, and then watering, and in summer you're harvesting and tarping. In the fall you're planting and tucking them in, and in winter you're just waiting, and eating.

Planting garlic has also forged an unlikely reunion with my high school algebra. Remember how we always used to complain that we were never going to use our algebra? Well, I went ahead and proved us wrong. I didn't set out to derive an equation out of thin air. I was just trying to figure out how much garlic to plant.

My equation can do that for you, too, provided you have a sense of your daily garlic consumption, and you have chosen the garlic you wish to plant. Ideally you have the garlic in front of you and can palpate the bulbs of a few heads and calculate a quick average number of cloves per bulb. Most quality varieties have between four and eight cloves per bulb. Any more than that and the cloves are too tiny.

The ideal window for planting is between Halloween and Thanksgiving. Too early and the cloves will start to grow too much, and risk being frozen out by winter. Too late and the ground will be frozen and you won't get anything in.

Plant your cloves about 6 inches apart in soft, fluffy soil. The scab side, from which the roots will sprout, goes down, with an inch of dirt remaining between the upper tip of the garlic clove and the surface of the earth.

After it's all planted and raked in, mulch the garlic with small deciduous leaves or straw (not hay, which has seeds). This layer will help insulate the dormant garlic through the winter and regulate its temperature and moisture level when spring finally arrives. Leaves are probably superior because they will decompose, increasing the microbial activity on the soil surface, which improves fertility. But broad leaves like maple can form a mat that can be difficult for the young garlic sprouts to penetrate in spring, so you will need to pull them off in March so the garlic can make it up.

After planting, give it a good soak — or simply plant it before a soaking rain. The moisture will activate the cloves to start sending out roots, in preparation for the spring growth spurt.

But they don't need to do much. The primary job of those cloves is to wait out the winter, hibernating, so they can go ballistic in spring. Not long after, you will be using your homegrown garlic in dishes like this.

Truly, every single pasta dish in the world could be called pasta with garlic, because garlicking the pasta should be the first move in pretty much any proper pasta dish. For any Italian-style noodles you may want to toss in grated Parmesan cheese with the garlic.

Boil the pasta and drain. Rinse the pasta briefly with hot water in the colander, so as to remove excess starch without cooling down the noodles.

Toss the hot noodles with garlic and olive oil and, if using, the grated cheese. Proceed with whatever sauce you had planned. Perhaps a marinara that began with garlic in oil with oregano. Whatever the final destination, you'll be glad the noodles have garlic on them.