"It's nice to see someone at these things that doesn't have gray hair," a man tells me as I wait in line to enter the Deschutes Republicans' Aug. 25 fundraiser, headlined by Raheem Kassam and Natalie Winters of the right-wing news website, the National Pulse.

A quick scan of the room affirms what the man said. In the sold-out ballroom of the Bend Golf Club I can only spot one other person who looks under 30. It's possible I'm the second youngest person in the room, after co-speaker Winters, the 20-year-old investigative reporter. 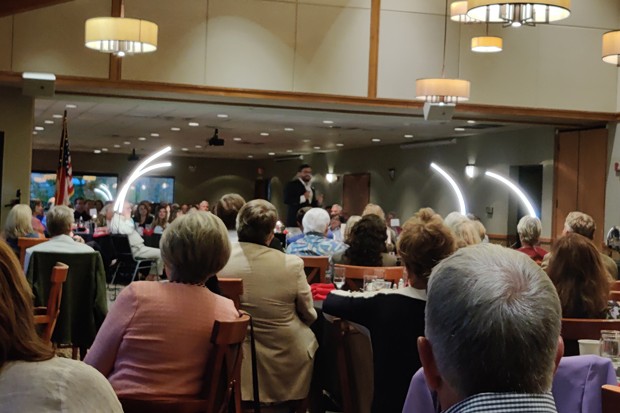 I amble around until I find a seat at the back of the room. The conversation is polite, largely centered around the audit of the Arizona election, until I'm asked what I do. When I respond that I'm a reporter for the Source Weekly, some of my table's guards went up, but the conversation remained friendly. Still, I got a sense that people were suspicious of the "liberal media" reporter at their table. Word spread fast and before long the man of the hour came to greet me.

Kassam, the main draw for the event, has stood on a blurred line between outright conservative politicking and punditry for over a decade. He edited Breitbart's London bureau, worked for right-leaning think tanks, co-hosts Steve Bannon's War Room Podcast with the former White House chief strategist under Donald Trump and was highly involved in the United Kingdom Independence Party, where he was a Senior Advisor to UKIP leader Nigel Farange during Brexit. Kassam also made a failed bid for leadership of the party after Farange retired.

"I hear you're a reporter—so you're very important, so I have to come and talk to you," Kassam said. "I'm sorry I've interrupted your meal, I'm Raheem, I just wanted to make sure we were going to get some fair coverage. I know it's a fraught world and I know the way your organization leans but I hope if you have any questions by the end of my talk, come up to me and ask me anything."

Media skepticism runs deep throughout his speech, and at several points he infers that he'll be misinterpreted, and challenged reporters to look up context for his more controversial comments. He asked to be quoted accurately about vaccine hesitancy, calling it an "experimental mRNA pseudo vaccine," not a "traditional vaccine," even while, as has been widely reported, the Johnson & Johnson vaccine, for one, is made traditionally. Kassam defended Matt Gaetz, the Florida congressman accused of child sex trafficking, saying it's an example of how the media destroys people's lives. He shifted the blame of the Jan. 6 riot away from the crowd of Trump supporters.

"A very tiny percentage of people decided to cause some trouble, who were those people?" Kassam said.

"Antifa," chimed a voice from the crowd.

"I don't even know if it was Antifa, but a lot of people were FBI informants, that's for sure," Kassam responded. "For the reporters in the room, again, before you quote me, please look it up."

Kassam, the main draw for the event, has stood on a blurred line between outright conservative politicking and punditry for over a decade. tweet this

This allegation is based on a widely debunked article from conservative website Revolver News that incorrectly assumes people identified as unindicted co-conspirators in charging documents were government agents. Kassam's request for reporters to research the context of his comments more often than not helped to debunk his claims rather than vindicate them, at least according to "mainstream" media.

"Whether it's denigrating the heroic work of Capitol Police officers, or his attacks on women and the LGBTQ+ community, Mr. Kassam's hateful views have no place in Oregon," said Democratic Party of Oregon Chair Carla "KC" Hanson in a press release.

Kassam claimed his best friends in Washington, D.C., are all liberal reporters, and at times bemoaned the breakdown of communication between the political left and right.

His maximalist language doesn't seem to adhere to that goal. During the speech he called Barack Obama a Marxist, and said that to be a peaceful Muslim you must ignore most of the Quran, and at several points assumed bad faith from reporters in the room. I believe I was the only one.

Having been addressed multiple times in the speech, I had a difficult time writing this in a traditional third-person point of view, so here's my view of what was true from the event. The majority of attendees believe the election was stolen, that vaccines are nefarious and masks are useless. To that point, Bend Police responded to a call to the address of the Bend Golf Club the night of the event, and confirm that they're investigating an allegation of harassment. The incident was reportedly over mask-wearing. The incident didn't involve any of the club's members, said the club's general manager, who declined to comment further regarding the "active investigation."

While giving a speech in a county where Republican voters represent roughly one-third of registered voters—with the other thirds represented by Democratic and non-affiliated voters, Kassam also advocated for tossing out more moderate conservative candidates.