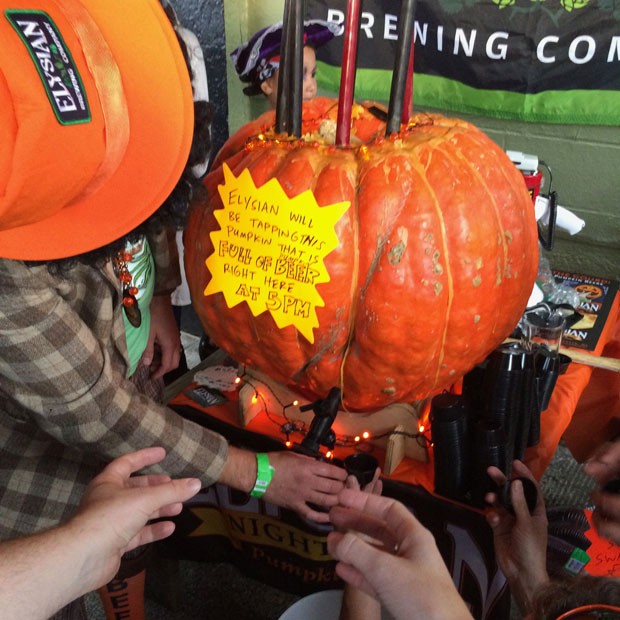 It is now well into the fall season, and everyone who enjoys a good ale knows that the cooler weather means only one thing: Fresh hop ales, barrel-aged stouts, tart fruit bombs, pumpkin beers!

Six years and several generations' worth of trendy beer fads ago, pumpkin-flavored beers were one of the main catalysts that drove "normal" drinkers over to the craft side of things every fall. Spearheaded by beers including Avery's Rumpkin, Dogfish Head's Punkin Ale, and New York-based Southern Tier's Pumking (which is really more Pumpkin Spice Latte than actual pumpkin, much to the chagrin of certain drinkers), the style became a huge hit around 2013 or so, even experiencing a "holiday creep" of its own as some brands began to go on sale in August. (On the local side, 10 Barrel's Jamaican Me Pumpkin—an imperial ale aged in rum barrels—is absolutely worth tracking down a bottle of.)

This mania for good gourds has simmered down in recent years, but it still has a loyal ally in Seattle's Elysian Brewing. For the past 14 years, the large (and now InBev-owned) outfit has held the Great Pumpkin Beer Festival, most recently at the Seattle Center grounds that surround the Space Needle. It is by far the largest event of its kind, with 2018's show featuring 80 different pumpkin ales (20 from Elysian alone), rewards for creative costumes and a massive pumpkin—we're talking several hundred pounds—that's hollowed out, filled with pumpkin beer, sealed, then tapped onsite. Talk about enthusiasm.

This year's GPBF has sadly passed, but there's no need to feel to disappointed, because Elysian is taking the show on the road. This Thursday, the Platypus Pub is hosting the brewery's Great Pumpkin Roadshow, making a stop in Bend as it travels around Oregon and southwestern Washington. There will be a (somewhat smaller) pumpkin getting tapped there, along with eight different Elysian pumpkin ales in the more traditional metal kegs.

These beers, for someone who only recalls the sickly-sweetness of Pumking, might be a breath of fresh air. The brewers at Elysian prefer to let actual pumpkin flavor take precedent over cinnamon and other spices, meaning that their flagship Night Owl pumpkin ale (brewed with 150 pounds of pumpkin in every batch) offers a measured amount of spice that doesn't get in the way of the actual pumpkin flavor.

Try it out on tap at the Platypus, along with several other pumpkin ales (including a barleywine and a milkshake IPA) that—if nothing else—are certainly going to taste suitable for the season.