The Hunt For B-Movie Perfection

''Shadow in the Cloud'' is a ridiculous delight

Every single year of my lifetime until now, the movies that have been released to theaters and Video on Demand in January are, aside from a few lost Oscar stragglers, hot dumpster juice boiling around a tire fire. There have been several years in a row where the worst movie I've seen in a theater all year turned out to be the first movie I saw in a theater all year.

And, God help me, I miss it. I miss seeing something so profoundly bad with an audience that I could feel the auditorium shift from being entertained into a state of shock and pure disbelief. I'll never forget seeing "The Devil Inside" at a packed Regal screening on Jan. 6, 2012. The entire movie was building up toward a bloody and (we were hoping) terrifying exorcism, and we were there for it. Creepy noises, shattered mirrors and distorted demonic presences started happening and the movie finally got a little scary. 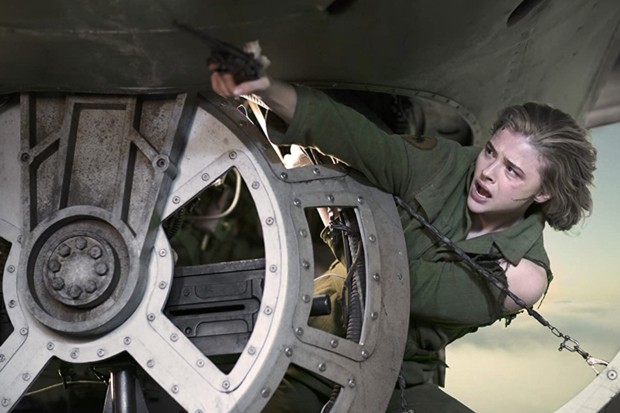 Then, out of nowhere, a smash cut to black. The movie ended in the middle of the exorcism with an advertisement that if we wanted to see what happened next, then we needed to visit the film's website! Just like that, a howl rose up from the packed auditorium as a few hundred people rose, stunned and disbelieving that a movie would make us go to a website to see how it ends. And then, as one, the entire room started to laugh at how terrible the movie was, and we all left the theater energized by our collective disdain.

What I found was "Shadow in the Cloud" and, I'm sorry to say, it was awesome. Chloe Grace Moretz plays Maude Garrett, a flight officer in 1943 hitching a ride on a B-13 bomber that's delivering a mysterious and top-secret package from New Zealand to Samoa.

The disgustingly sexist and awful crew puts her down in the belly turret for the flight, where after a few minutes she notices a GREMLIN ON THE DAMN WING!!!

Yep, you guessed it, "Shadow in the Cloud" is a WWII monster movie where the main character is trapped in a turret for over half the film's runtime. Most of the tension is built from what she hears happening in the plane above her through the radio comms. Don't get me wrong, the movie is silly as all hell, but it plays like an episode of "The Twilight Zone" crossed with a 1940s radio play designed to scare the pants off little kids and their parents.

If you need a dash of realism with your movies, then "Shadow in the Cloud" might not do it for you, but as a fantasy it's an absolute banger. The script by human stain Max Landis isn't great, but Chinese-New Zealander director Roseanne Liang infuses the movie with such infectious energy that, even at its most ridiculous, the film never stops being an exciting thrill ride that makes you feel like a kid listening to a campfire story.

It's an absolute blast from start to finish and, even though it wasn't what I was searching for, it's exactly what I needed to hype myself on the uncertain future of movies in 2021. While I still very much missed that communal experience, "Shadow in the Cloud" reminded me of the joy a good movie can give you in any situation, whether it's on your phone or at an IMAX. Actually, I take that back. Don't watch movies on your phone. We're all better than that.

Shadow in the Cloud
Dir. Roseanne Liang
Grade: B+
Now available on VOD