The Hunt for the Red Schlocktober | Film | Bend | The Source Weekly - Bend, Oregon

The Hunt for the Red Schlocktober

Gerard Butler in a submarine 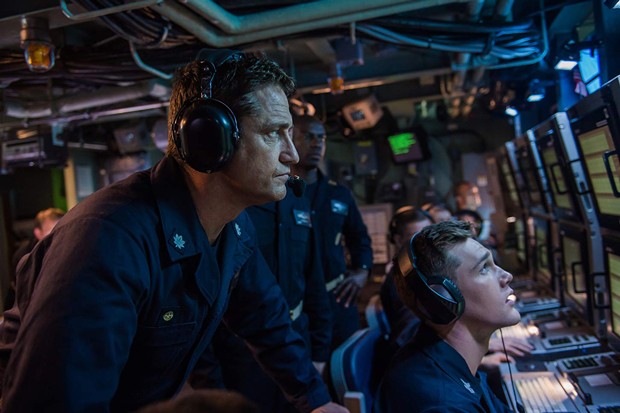 Man, I love submarine movies. The creaking of the hull, the intensity of enclosed spaces and the dominant personalities aboard make it one of the most entertaining and grueling genres possible. Films like "Das Boot," "The Hunt for Red October," "Crimson Tide," "Below" and "U-571" are such great examples of the genre that to make a current submarine movie, the filmmaking team needs to find new ways to ratchet up the tension. Otherwise, the movie won't come close to those films' highs.

"Hunter Killer" isn't even in the same league as the others I mentioned. For one thing: why are people hiring Gerard Butler to act in movies in which he doesn't shoot at people or stab them in the brain?! When he faced climate disasters in "Geostorm," he didn't even try to fight the storm. Instead he tried to use science against it, which is nowhere near as fun. In the last "Fast and Furious" movie, when The Rock was faced with torpedoes, he kicked them out of the way and the crowd went insane. No one wants to see Gerard Butler out-think someone; they want to see him out-kill them.

The convoluted story that is "Hunter Killer" sees Butler and his crew aboard the USS Arkansas, searching for a missing American submarine that sank at the same time as a Russian one. Helping him out is Gary Oldman as the head of the Joint Chiefs of Staff, Common as a Rear Admiral desperate to stop WWIII and Linda Cardellini as a National Security Agency analyst. Simultaneously, a group of Navy SEALS on the ground is trying to prevent a Russian coup.

Everything moves quickly and the story is less terrible than it could have been, but there's absolutely no intensity to the film because we're never invested in the crew of the Arkansas. The audience needs time with characters before they're put in deadly situations or else the stakes feel like a desperate attempt to keep the audience's attention. Mine never stopped wandering.

"Hunter Killer" isn't a terrible movie (like the hilariously terrible "Geostorm"), but it's absolutely forgettable in the worst possible way. By the time I got to my car after the movie, the details were foggy, like they, too, were lost in the murk of the ocean, with no choice but to sink to the bottom and wait for someone to come along.