The inside story | Kids In Action | Bend | The Source Weekly - Bend, Oregon

If you walk into the fourth-grade wing on a Monday at Lava Ridge Elementary, you'll notice a student doing some of the teaching. Ten-year-old Mackenzie Hunniecutt spends her lunch recess one day a week teaching some of her fellow students American Sign Language.

Mackenzie was born deaf and has been using ASL ever since she was a baby. She uses a combination of hearing aids, sign language and reading lips to communicate with people. When she is at school, she has a dedicated ASL interpreter who is there to make sure she doesn't miss anything from her teacher or anyone else in her class. 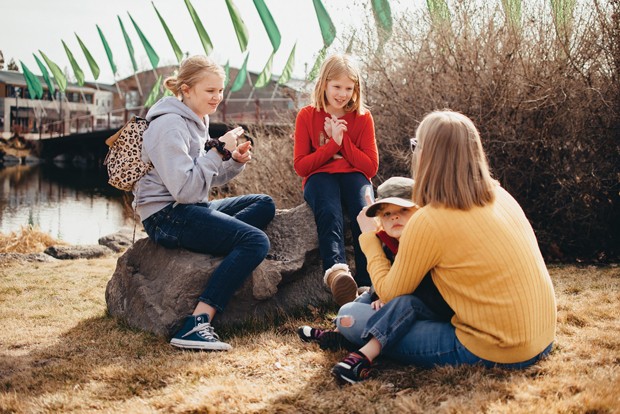 Tami, her interpreter, came up with the idea for Mackenzie to teach sign language to her peers. Each week, Mackenzie thinks of different words to teach her students. They go over the signs, to help remember them, but also to make sure the hand movements are precise and accurate.

"A lot of signs are similar, so how people move their hands is important," Mackenzie explains.

So far, her favorite session was teaching how to sign different animal names. Sometimes they will also play games like I Spy to help the kids remember the words.

The Hunniecutts moved to Bend from Florida in January of 2018. They had never been to Oregon before and weren't sure what it would be like to find a place in the deaf community. They visited several churches and saw people signing in the parking lot after the service one day, so Erin started a conversation. From there the family has gotten more and more connected with the deaf community in Bend.

Just like with spoken language, the Hunniecutts discovered there are regional differences in the signs people use. One of the most obvious was the sign for Oregon.

Another really pleasant surprise upon moving to Bend was how prepared Bend-La Pine Schools was when it came to the accommodations Mackenzie needed to be successful. Erin says in Florida they had to file formal state complaints before the school would provide an interpreter, even though an interpreter is required through the Individuals with Disabilities Education Act.

When they arrived in Bend, Erin called the principal at the school (last year she attended Pine Ridge Elementary) and they had an interpreter set up for her on the first day of school. Bend-La Pine Schools tries to keep interpreters with their students until they graduate, so Tami moved to Lava Ridge with Mackenzie when she transferred schools. Tami also gave a short lesson about ASL and hearing loss to the students in Mackenzie 's class the first week of school, so the students would understand why she was there and how they can help Mackenzie even more.

Mackenzie says people should know that if they are talking to her or another deaf person, it's really helpful to make sure that the person talking has her attention before they start the conversation. Sometimes when people are talking behind her she won't realize they are trying to talk to her, especially if there are a lot of other noises in the room. Her mom says even if people are more than a few feet away it can be difficult for Mackenzie to hear them. People may think she isn't paying attention to them, but really, she just can't hear what they are saying.

"Mackenzie doesn't like to sign much herself, partly because kids used to make fun of her when we lived in Florida," says Erin. "So, her teaching this class is great!"