A small but dedicated chatroom is coordinating a grassroots "audit" of Oregon's elections, with help from local Republican officials

On June 22 Deschutes County Republican Party Chair Phil Henderson and Precinct Committeeperson Mark Knowles spoke to the Gateway Pundit, a far-right news website, after touring the Maricopa County, Arizona, audit. The Arizona audit has been criticized for indulging conspiracy theories, like searching for traces of bamboo in ballots to determine if they were imported from Asia, while failing to meet the state's standards for recounts and audits.

The Deschutes County Republican Party's website hints at its electoral skepticism of the 2020 election. On its official website's homepage, just below a letter from Henderson, is a collection of videos from Mike Lindell's Cyber Symposium, a 48-hour broadcast hosted by My Pillow CEO Mike Lindell purporting widescale election fraud. When broadcast on One America News Network, Lindell's documentary, "Absolute Proof," was prefaced with an ironic disclaimer. 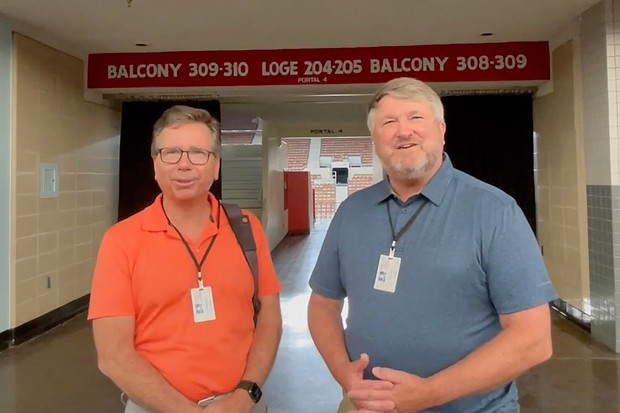 "OAN does not adopt or endorse any statements or opinions in this program regarding the following entities or people: US Dominion Inc. (and any related entities); Smartmatic USA Corp.; Brian Kemp; Brad Raffensperger, or Gabriel Sterling," a statement read before the documentary aired. "Further, the statements and claims expressed in this program are presented at this time as opinions and are not intended to be taken or interpreted by the viewer as established fact."

Maricopa County officials, Arizona Democrats and election experts criticized Cyber Ninjas, the third-party auditors hired by Arizona Senate Republicans, for lack of transparency, failure to meet deadlines, lack of election experience and mishandling of election equipment – decertifying over $2 million worth of Maricopa County election equipment. The audit dragged past its deadline and is four months overdue, but results are expected to be released on Friday, Sept. 24. The state already audited the election several times before Arizona Republicans went to court to take custody of ballots and voting machines.

Local GOP members Henderson and Knowles spoke to the Gateway Pundit just as the paper examinations were wrapping up.

"It was just really an impressive amount of detail and forethought that went into this planning, and we got a briefing beforehand about all the steps of the system, so I was just really impressed," Henderson told the Gateway Pundit. "We're the first mail-in voter, as a state, so we have a lot of experience with that. We wonder about the susceptibilities there and we're also a motor voter registration state, which causes lots of people to be registered, whether they want to be or not, so to speak. So there's some things we wanted to see how they do it."

Henderson added they will take home lessons learned from the Arizona audit.

"I'm the chair of the local Deschutes Republican committee. We have an election integrity subcommittee that is going to be looking at the processes in our county and then trying to share this with other state officials and work through some of these questions that have been raised, just watching this," he said.

It's unclear what the election integrity subcommittee Henderson referenced does. Both Henderson and Knowles didn't respond to a request for comment, but it is likely connected to the Oregon First Audit Chat. The Oregon First Audit Chat, an online forum, formed on June 8, and in just a few months its following swelled to over 5,000, with about 400 active members online during the day. They partnered with Seth Keshel, a former Army captain and baseball analyst who has amassed a following on Telegram focusing on alleged election fraud, and aiding regional channels. Keshel has over 150,000 followers on Telegram and there's an audit channel for all 50 states.

Deb Lee, the Deschutes Republic Party Vice Chair, started the Oregon First Audit Chat, according to many of its members.

"I couldn't remember who is running our channel. Deb Lee? started it I thought," a chat member, Diane P., wrote. 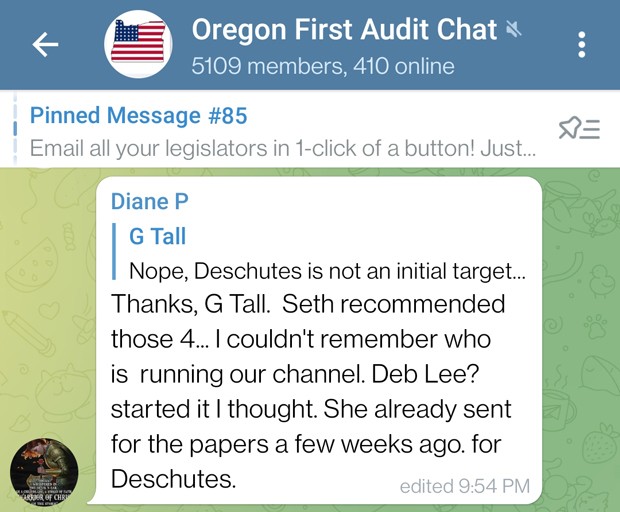 The chat has a central room for general updates about the "audit," and three rooms for specific tasks group members partake in. The Freedom of Information Act room requests documents, the document group analyzes the FOIAs and the communication group gets in touch with legislators, county commissioners and other officials.


Keshel claimed 20 of Oregon's 36 counties had "obvious fraud," eight were suspicious and eight were clean. Keshel said he estimated over 8 million "excess" Biden votes in the United States, 162,000 in Oregon and said the state's four initial targets are Linn, Jackson, Umatilla and Yamhill counties.

All four counties voted for Donald Trump in the 2020 election, but Keshel claims they certified thousands of fraudulent votes. These claims aren't based on demonstrated fraud, rather they are Keshel's own trend analysis of population growth, voter behavior and party registration. His predictions contain few of the hallmarks of a traditional analysis: he doesn't share data sources, methodology or margin of error.

On Sept. 11 the Linn County Clerk, Steve Druckenmiller, began receiving hundreds of emails chastising him for allegedly certifying fraudulent election results during the 2020 election. Some of the emails were polite and inquisitive, but most were angry. Druckenmiller said people shared doubts about the electoral system with him occasionally before, but nothing like the hundreds spamming his inbox.

The emailers were likely influenced by Keshel, who earlier in the day posted a message to his followers on Telegram.

"The election in Linn County defies all political, registration, and population trends in a state that has voted by mail for decades. You certified a heavily fraudulent election. People like you are why people hate the GOP. You lack character to admit you may be wrong, and the courage to ask me about my findings, opting for personal insults, instead," Keshel wrote. "I would hate it if 150,000 people asked you about your election at your [work email] address."

The post has been viewed by over 130,000 people and has received nearly 1,500 comments. Druckenmiller said Keshel never reached out to his office for data or clarification before alleging fraud.

"That is something that if you are really a serious researcher, you would analyze and make part of your research. Just saying, 'Look, Biden got 8,000 more votes than he should have,' Well, look back where they could have come from aside from increased registration," Druckenmiller told the Source Weekly.

Druckenmiller said claims of fraud in Linn County collapse with a broader analysis that accounts for more than population growth and party registration. Fewer third party and write-in votes occurred in Linn County in 2020. Additionally, Oregon's "motor voter" rule, which registers Oregonians to vote automatically when they renew or obtain a state ID, went into effect in 2016 and likely increased registration, especially among independents. Lastly, Joe Biden was simply better received than Hillary Clinton.

"Five-hundred write-ins for this election. In 2016 there were 2,500, because people in Linn County could not abide Hillary Clinton, but they didn't like Trump," Druckenmiller said. "That's clearly what the picture shows."

"I'm here, all the evidence is here. Let's go to court," he said. "I don't know what else you can say, because in the end, it's got to come down to the physical evidence. This is what they're wanting was this forensic audit, so just get it ordered."

Druckenmiller said after he was accused of certifying a fraudulent election, he received hundreds of emails, ranging from polite questions over the election's legitimacy to outright threats against Druckenmiller and his staff. Messages in both Keshel's chat and Oregon First Audit Chat shared Druckenmiller's email. The spamming is disruptive for the office, which uses the email Keshel shared for military and overseas ballots.

"They're not bad people. I mean, these people, most of them are patriots, but a lot of them are zealots," Druckenmiller said. "There's a big difference between the two, and I have the emails to prove it."

Keshel's claims are being shared and pursued by some of the state's most prominent fringe GOP officials, even as they target other Republicans. Keshel frequently calls Republicans who don't believe the 2020 election was fraudulent RINOs, or Republican in name only.

An account claiming to be one of Perkins' 2020 primary challengers, Paul Romero, is also in the chat. After his loss in the primary, Romero claimed the election was rigged in Perkins' favor. He's anticipating a 2022 run for governor, and did not respond to a request for comment.

The most prominent currently elected official in the chat is Oregon State Sen. Dennis Linthicum (R-28). The chat alleges Linthicum, and Oregon State Senator Kim Thatcher, attended the Arizona election audit, but the Source couldn't confirm that when this story went to press. Thatcher, however, did send a representative to Mike Lindell's Cyber Symposium, a 48-hour program baselessly claiming widespread election fraud.

Representation in the chat around the state raises a question of what regional Republican parties' election integrity subcommittees do. People in the Oregon First Audit Chat allege that Polk, Yamhill and Deschutes Republican Parties have created "election integrity committees," but little other information is available. Oregon First Audit Chatters often advocate for the Precinct Strategy, which asks the "patriot" wing of the Republican party to fill Precinct Committee Person vacancies to implement policies opposed by moderate Republicans. The strategy was conceived by Dan Schultz, an Arizona precinct committeeperson, and has been promoted by former Senior Advisor to President Trump Steve Bannon.

"In a nutshell, this is what every conservative – including you, dear reader needs to do ASAP – if our goal is election reform laws requiring all counties to stop using any kind of image machines for counting votes."

The Deschutes County Republican Party did not respond to requests for comment.