The Joy of Pandemic Songwriting | The Source Weekly - Bend, Oregon

The Joy of Pandemic Songwriting

Ever since Mt. Joy made a big splash in the music world with "Silver Lining," the single from the band's 2018 self-titled debut album that became a No. 1 hit at adult alternative radio, the band has been widely labeled as a folk-rock act and frequently compared to The Lumineers.

Mt. Joy singer/guitarist Matt Quinn will even allow that "Silver Lining" sounded a little like The Lumineers, with its strummy folk-ish verses and stacked harmonies in the chorus. And the fact that Mt. Joy opened for The Lumineers on that group's early 2020 arena tour probably reinforced the connection. 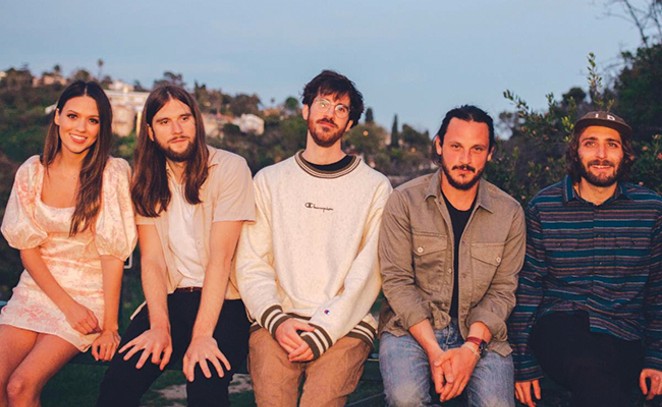 But Quinn is ready to see Mt. Joy's music viewed through something much broader than a folk-rock/Lumineers lens.

"I love The Lumineers. I got to meet them. They're lovely people. I think the music they make is fantastic," Quinn noted during a late-July phone interview. "Not wanting to be compared to them has nothing to do with not liking their music. I think it's just about comparison. I've always felt like it was about comparison.

"I get where it came from and everything, but I think it's a bit lazy. Our big hit song, sort of, I can see where the Lumineers thing comes in," he said. "But it didn't even really represent the (first) record, I think, that well. If you go back and listen to the first record, the other songs were pretty different. So I don't know if our whole goal is to avoid comparisons, but it is nice to start to feel like we're coming into our own and the music we're making fits the music we want to be making."

There is still a folk element to songs such as "Roly Poly," "Don't It Feel Good" and the title track, but they come with some gauzy atmospherics, synthetic beats and treated guitar tones that push the songs outside of the folk realm. Elsewhere Mt. Joy get even more adventurous with the sonics. "Johnson Song" has a distorted lead guitar that gives the tune a freaky edge. "Lemon Tree" takes on a Beatles-esque psychedelic pop experience when it kicks into a pair of instrumental segments full of fuzzed up tones. "Evergreen," meanwhile, is a catchy, nervy rocker with shimmery guitars and a driving beat. The sonic creativity generally enhances the songs, but what still stands out most is the ability of Quinn and his bandmates to craft striking and inviting melodies.

“One of the real amazing things about the new album is it’s really allowed our sets to be more diverse.”—Matt Quinn tweet this

Quinn got started writing for "Orange Blood" soon after the tour opening for The Lumineers wrapped in March 2020.

That was not the original plan. Mt. Joy had its second album, "Rearrange Us," ready for release and was eyeing an extensive round of touring in 2020 to support the album. But then the pandemic hit, upending those big plans, although the band went ahead and released "Rearrange Us" rather than making their fans wait any longer for new music.

Pivoting into songwriting mode was the only real option for Quinn once the world started shutting down.

"Right when the pandemic started, I was in New York City. I was stuck in a studio apartment and actually my girlfriend had a kind of busted acoustic guitar, but I didn't even have my guitar," Quinn said. "But I had (her) guitar and it (songwriting) was all there was to do. We were literally quarantined and genuinely terrified of interacting with people. So we were making music, and yeah, it was freeing in a way to have an outlet like that. I feel really, really fortunate that that was my job."

Quinn and his girlfriend didn't stay in New York City for long. The city became an epicenter of the pandemic, and feeling it had become dangerous to be there, they decided to move to Quinn's former hometown of Philadelphia.

After that, Quinn and his songwriting partner in Mt. Joy, guitarist Sam Cooper, rented a small barn near Philadelphia and started convening for near-daily writing and recording sessions. Most of "Orange Blood" was written there, and then it was time to hit the studio. So Quinn and Cooper joined the rest of the band—keyboardist Jackie Miclau, bassist Michael Byrnes and drummer Sotoris Eliopoulos—and producer Caleb Nelson in Los Angeles, where the album was completed.

Quinn said the new songs—even with the studio-crafted sonics—translate well to the live stage. And the "Orange Blood" material is bringing Mt. Joy closer to achieving the kind of live experience the band has wanted to create all along.

"One of the real amazing things about the new album is it's really allowed our sets to be more diverse," Quinn said. "Before this album we had, what, like I don't know, 26 songs, which of course, you don't play every single one. You get into a set list problem where you're trying to change it up as much as possible, and we would really like to become a band that plays, that has unique shows. And our new album has really allowed that to happen. It's set up some cool jams. It's really made the live show more dynamic, I think."