The Life of a Ballot | Local News | Bend | The Source Weekly - Bend, Oregon

The Life of a Ballot

Once you vote, the hard work begins for the Deschutes County Clerk’s office

November 02, 2018
comment
Mail-in voting allows voters a chance to research their candidates and vote in the comfort of their own homes—but it also affects the timeline for counties to process those ballots.

In Deschutes County, the county clerk's office is counting ballots for weeks before election day.

Although the process may seem mundane, it’s visibly exciting for everyone in the office. According to Deschutes County Clerk Nancy Blankenship, "there is an energy in here. When the people aren't in here, it's just not here."

From the voter's hand to a completed vote, the life of a ballot is a complex one—but Blankenship's office had the process down to an art. The ballots make their way to the county clerk from drop sites around Deschutes County—and the mail. The first step is separating ballots into precincts and then verifying signatures by running them through a sorting machine. "It's going to take an image of the outside of the envelope and it's going to crop the signature," said Steve Dennison, elections supervisor at Deschutes County Clerk’s Office. "We're going to compare the signature that's on this envelope to what we have on file."

Those verifications are done manually. The machine sends the signature to a work station, where it brings it up next to the voter's signature, on file with the county. An employee manually compares the two signatures and marks any off that may be challenged.

"We're looking at style, not necessarily that they completed their whole name. They're either accepting them as good or challenging them as no good," said Blankenship. "Or if there's no signature, they're denoting that. And then it goes to a second level of review."

The ballots are run through again and the machine pulls out any challenged or blank signatures. The office then sends a letter or postcard to those voters. Those whose signatures are challenged or who leave their signature blank will have 14 days after the election to contact the clerk's office to verify their signature.

"Then at that point, the ballots will be sorted down at the precinct level," Dennison said. "That will help for auditing purposes, if you need to recount a certain contest they are isolated to these certain batches."

Before machines took over some of the tasks, every step was manual. Though things have changed, there’s still a surprising amount done manually.

The ballots are then sent to "the tables," an area for volunteers to open the ballots, count them and then separate them. 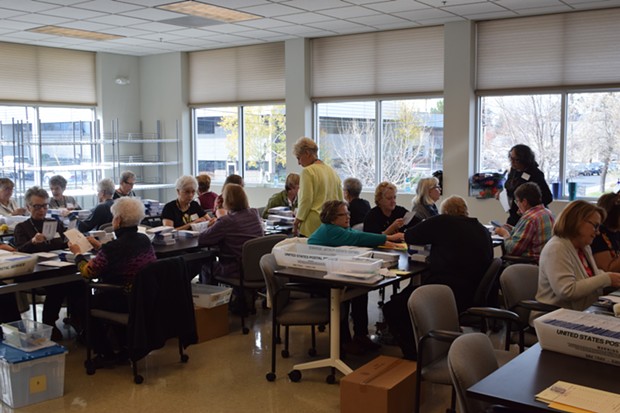 "Some of them have been with us since the polling days," Blankenship said of the volunteers. "Most of the rest of them are new in the last 15 years, and some are new this election."

The ballots are pulled out and "yarned." If you've ever wondered why there are holes in your envelope and secrecy sleeve, it's to verify that the ballot has been removed; the volunteers string yarn through both.

"Once the ballots are opened, they are scanned. The software goes through and figures out what is a good vote or not," Blankenship said, adding that a questionable vote would be something like multiple ovals filled in. "Then we go back through the adjudication process, a team of two, of different parties. And we look at the image of the ballot, or the oval, and determine if it's an actual over-vote that they meant to fill out."

As of Oct. 30, 27 percent of registered voters in Deschutes County had voted—not a surprising number a week before the election, Blankenship said.

The deadline to vote is 8pm election night. Blankenship said, "a huge percentage" of ballots are turned in on the very last day.

"We close all the drop sites at 8 o'clock," she said. "At every drop site there is always a deputy and another employee. So if there are people in line at 8 o'clock they can still drop their ballot and a deputy will have an “end of the line” sign. But if they come up a second or two afterward, they've missed it."